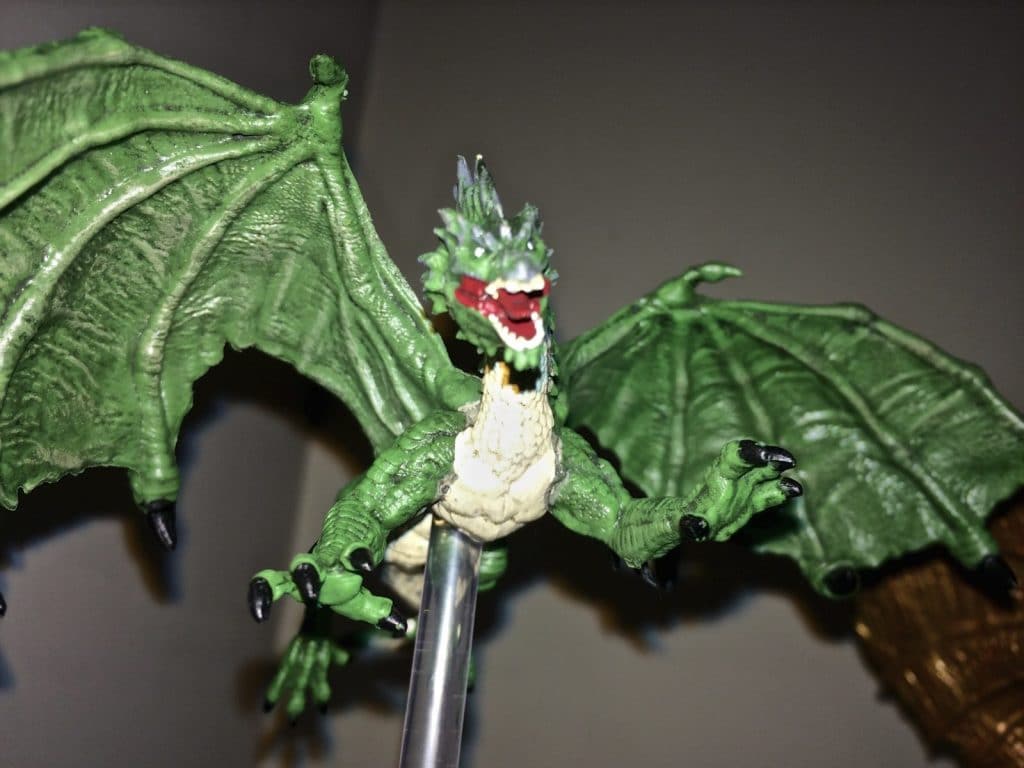 Ever since Charlotte Gray, it’s been trendy to refer to people and things as ‘blisteringly sexy.’ In fact, I saw that same phrase used as I was browsing through the comment section of a post announcing the Dungeons and Dragons Icons of the Realms: Tyranny of Dragons miniatures.

To be honest, that’s not my idea of sexy. Look, some people are into blisters. That’s OK.

So…I won’t follow the anonymous internet commenter and describe the D&D Icons of the Realms: Tyranny of Dragons miniatures as blisteringly sexy, but I will spend the next 700 words giving you a quick review of the new D&D miniatures.

What is D&D Icons of the Realms: Tyranny of Dragons?

Tyranny of Dragons miniatures are meant to serve as companions for the latest D&D 5e storyline. But while Wizards of the Coast makes the Dungeons & Dragons tabletop role playing products, they licensed their miniatures production to Wizkids.

The miniatures are a sturdy plastic and come pre-painted. There are 44 miniatures in the set and they come randomized in booster boxes. Each booster box contains 4 random miniatures, typically a couple small figures, plus a medium and large figure. Figures are securely and individually bubble wrapped, so I’ve never had a figure be damaged.

How do they look?

The sculpts are FANTASTIC. They are highly detailed, well posed, and molded very accurately. I pulled a green dragon from a booster and I just stared at it like I was a little kid, noticing the sculped scales on it’s belly, the spikes on it’s back, and it’s broad outstretched wings. Kudos +1 to the artists who sculpted the figures, as it’s not just the dragons that look great, but the smaller figures look great as well. (Click picture to embiggen.)

I can’t say I’m as impressed by the paint jobs on the figures however. But this isn’t because the painting is bad across all the figures, as some are painted up quite nicely, with a level of precision and detail, with strong colors. The problem is that you’ll occasionally pull a figure that is a dud.

Why are some figures painted nicely, while others in the line look like my 4-year-old hit them with her water colors? It’s inexplicable.

The uneven quality of the painting across the line brings up another question I have with the Tyranny of Dragons line. Why do Pathfinder figures – on average – look better than D&D miniatures when both lines are produced by Wizkids?

The Pathfinder Battles series now has hundreds of figures across all their lines such as the Rise of the Runelords, Skull and Shackles, and Reign of Winter. With very few exceptions, every Pathfinder Battles figure is not only sculpted beautifully, but has an incredibly polished paint job. Like the Tyranny of Dragons figures, these Pathfinder Battles miniatures are made by Wizkids, so why are the D&D figures hit or miss when it comes to paint jobs? It’s befuddling to me.

Do you want a dragon?

I’ve picked up 8 boosters so I’m nowhere close to a full set of 44 figures, and at around $16 a booster pack, they aren’t cheap. But that’s not to say they aren’t a great value.

Again, each booster contains 4 figures and even if you consider it paying $4 each for a well-sculpted, pre-painted, hard plastic figure, they would be a nice addition to your collection. But the real deal comes in the fact that when you pull a dragon from a booster, you feel like you are getting so much more than a $4 figure.

The collection includes green, black, blue, bronze, copper, gold, red, and silver dragons, plus some other cool creatures like wyverns or a pegasus. Out of 8 boosters, I’ve pulled 7 dragons. (The one booster that didn’t contain a dragon included a Frost Giant, but I still call that one a boo-ster.)

My secret is that I hold up two boosters in my hands, summon my inner chi (or whatever the heck it is), and try to ascertain if one booster is heavier. It’s subtle, but if it’s true that a larger dragon figure could weigh just a quarter of an ounce more than another figure, it’s worth giving the boosters the ‘ole weigh test.

Final Thoughts About the Tyranny of Dragons Miniatures Line

So I wouldn’t describe the paint jobs as blisteringly sexy, but I also would not hesitate to recommend The D&D Tyranny of Dragons line to anyone who is looking for a few more miniatures for their gaming table.

The figure mix is good, they are wonderfully detailed, and each box contains a solid value for your money.

But above all that, the dragons are COOL, and isn’t that want you want out of a Dungeons and Dragons miniature? You can pick up a booster at your local gaming store or grab them online at a retailer like coolstuffinc.com, where you can actually even buy or sell individual figures.