When I was a kid I went through a level 20 ninja phase. I’d hit up the local flea market where I’d buy $1 ninja throwing stars, then run home to practice sticking them into trees.

Of course, any time I’d actually get one of my throwing stars to stick into a tree from any distance whatsoever, I’d let out a gleeful hoot, which would only serve to give away my covert ninja location. Realizing I wasn’t destined for the Way of the Samurai, my ninja phase faded, but was not totally lost to me…

In 1992 the AD&D Oriental Adventures book was released, and I was briefly sucked back into Dungeons & Dragons, running a couple great campaigns with my friends. Sadly, I think my mom threw out my old ninja stars. Either that, or she is currently using them for her own covert assassination missions. It’s a coin flip.

I’m finally getting to my point, which is this: I have mad knowledge of throwing ninja stars. Second, most of that knowledge came by devouring the AD&D Oriental Adventures book, so let’s use that as an opportunity to get a little nostalgic.

What is the AD&D Oriental Adventures Book? 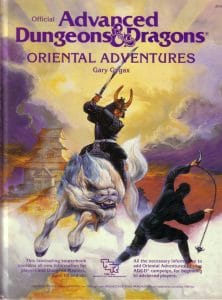 It’s traditional to think of Dungeons and Dragons as being set in medieval Europe, but that AD&D Oriental Adventures book provided rules for adapting D&D for use in campaign settings based on the Far East. While D&D traditionally could be played as rogues and paladins, Oriental Adventures gave role players samurais and ninjas, and my goodness, was it glorious.

The book drew on the history of China, Korea, and Japan. Included, of course, were detailed rules for karate and other martial arts styles. It was written by Gary Gygax and Zeb Wells, and the 144-page book also gave players new classes, new races, and page after page of ninja slicing weapons and gear like kantana swords, which I still have an itch to buy if I’d ever run across it at a flea market.

Other classes introduced in the book were the sohei, the peasant warrior bushi, the samurai, the yakuza, and, of course, the ninja. Ninja characters would take one of the other classes in addition to the ninja class. In keeping with their secret ninja nature, they would use their normal class as a cover identity, just as I might secretly be using a cover identity now.

The three new character races were:

First, Oriental Adventures introduced a new game mechanic to Dungeons & Dragons –  it included rules for non-weapon proficiencies. Every character was expected to possess proficiencies in noncombat arts with skills such as calligraphy, etiquette, or animal handling, a mechanism that was explored in more detail in the 2nd edition of the general AD&D rules.

Second, Oriental Adventures included an honor system, in which honor points were lost when a character failed to behave in a correct fashion or uphold the family name. This wet as far as the character sheet being simply thrown away, if such behavior continued. Honor was reflected in a character’s family, going so far as influencing family background, status with ancestors, and provisions of their birthrights.

It was a HUGE hit and an expanded version of the book, which was written by James Wyatt and released in 2011, earned awards for best campaign setting.

What’s the future of Oriental Adventures in D&D 5e?

But will we ever again get cool modern rules for throwing ninja stars in our D&D campaigns? In other words, will there be an Oriental Adventures 5e? 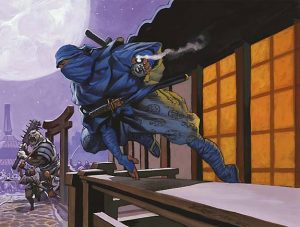 Well, the 5e Dungeon Masters Guide gives at least some advice for how to run oriental adventures (Wuxia) campaigns, but it doesn’t go much further than to include a table of Wuxia weapon names. That not enough to satisfy a samurai.

We’ve researched the secret D&D 5e publishing schedule through 2018 and there is little more than speculation at this, and certainly nothing confirmed on the Oriental Adventures front. Yet, you have to think that there are some plans afoot somewhere, Oriental Adventures was just too cool for it to exist only as a nostalgia piece.

In the meantime, I found a home-brew solution that at least partly meets the Oriental Adventures 5e need.