At 38″ inches tall, my youngest daughter is exactly the size of a gnome, as they are portrayed in Dungeons and Dragons. I even call her my little gnomie, likely because as a dad I am contractually obligated to use bad puns whenever possible. Just keep reading, I’ll work in some more.

This got me thinking about the history and lore that surrounds gnomes throughout the 40+ year history of D&D. And being a lore nerd, I found it so interesting that I wrote 1000 words on it. See below.

Gnome Lore in Dungeons and Dragons

A lot of people think history is about as exciting as the non-juicy parts of a pack of Gushers (Editor: They still make that?), but listen to this short story of how gnomes came to be. In the 16th century, Paracelsus, a Swiss alchemist, philosopher, physician, botanist, astrologer, general occultist, and the credited founder of toxicology, derived the term gnome from the Latin gēnomos, which itself was from the Greek γη-νομος, that literally means “earth-dweller.” See, that’s juicy stuff. 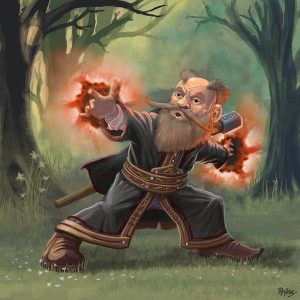 Paracelsus classified gnomes as small, humanoid earth elementals, whom he described as two spans high, very reluctant to interact with humans, and able to move through solid earth as easily as humans move through air. Paracelsus also considered gnomes the most important of the diminutive spirits, which is high praise from a noted alchemist and founder of toxicology.

In the 18th century gnomes were picked up in poetry, being presented as small, celestial creatures which were prudish women in their past-lives that now spend all of eternity looking out for other prudish women. (Now that’s juicy.) The 19th century saw gnomes come alive by authors who presented them in fairy tales, albeit used mostly synonymously with goblins.

Finally, in the late 1800s the gnome started to get his due. Famed poet William Cullen Bryant contrasted gnomes to elves. They were later used to satirize materialism, likened as subterranean creatures that guarded treasures of gold buried within mountains.

Yeah, yeah, that’s juicy stuff, but when did gnomes become a playable race in D&D?

The first entry on gnomes in D&D traces back to the beginning, as it was from Monsters & Treasures, one of 3 little paperbacks by Gary Gygax himself that got D&D started in the mid-70s. The entry read:

Slightly smaller than Dwarves, and with longer beards, these creatures usually inhabit the hills and lowland burrows as opposed to the mountainous homes which Dwarves choose. They are more reclusive than their cousins, but in all other respects resemble Dwarves.

Advanced Dungeons & Dragons 1st Edition’s Monster Manual kept this thinking going by adding just a little more flavor to the core gnome race, like the racial ability to speak with burrowing animals. Gnomes in these very early years of D&D could be fighters, illusionists, thieves, or assassins, but oddly, not clerics.

Interestingly, Gnomes were a dwarven sub-race at this time, yet jolly and magical like elves. In fact, one legend said that gnomes were actually the offspring of elves and dwarves, a forbidden and scandalous affair that both races likely tried to forget until a drunken uncle would inevitably bring it up in slurred speech over Thanksgiving dinner, opening the wound yet again.

AD&D 2nd Edition didn’t change gnomes much, particularly in regards to the Forgotten Realms. But between the 1st and 2nd Editions we got Dragonlance and that brought the Tinker Gnomes, an entire race of curious, obsessive, quirky, mad little Da Vincis. Their inclination toward tinkering has persisted, even to the point of making them a vaguely steampunk race.

Otherwise the gnome was a forgotten little race in D&D with 3rd edition’s add of the “illusionist” sub-class being the only interesting modern revision to their story. But just like the “mad inventor” schtick, gnomes as being skilled in illusions stuck as well. One minute a gnome is there, then the next minute she is…

Gnomes are playable in D&D 5e, although some cranky old DMs will ban them from the table. (Who wants to try and mechanically balance an inventor in game play?)

But I love them, even to the point of creating several gnome NPCs, one of which I modeled after my 38 inch tall daughter, Charlotte.

D&D 5e gnomes are described as having a “vibrant expression” and “delighted dedication”, seeing the world through curious and impulsive eyes, while always taking delight in life. I’ll take an outlook like that.

5th edition’s Forest Gnomes are natural illusionists, while Rock Gnomes are competent tinkerers, meaning past edition representations of the little buggers is alive and well. And, of course, D&D 5e also has the Deep Gnomes, otherwise known as the Svirfneblin, the dour and serious cousins to the gnomes that live deep in the Underdark. But that’s some lore for another day.