Conventions come in all kinds of genres, sizes, and locations. Dragon con is probably the biggest convention in the Southeast while San Diego Comic Con is the biggest in the West.

People travel cross country, or even across the ocean, just to nerd out at these exact conventions. I was introduced to Dragon con 6 years ago, and I’ve been hooked ever since. It wasn’t until 2 years ago I started searching for different cons, small and/or famous.

I never had a desire to go to a small con because I thought I got too spoiled by Dragon con’s well known guests, awesome panels, and ridiculous cosplayers. But this year I went to a 2 yr old con in Birmingham, Alabama called Magic City Con, having been introduced to the con because of a Dragon Age group I joined through Dragon con and social media.

I decided to share the pros and cons of both big and small conventions, and why you should at least go to both once in your life.

Big cons have the upper hand on having a lot of top notch celebrities to get autographs and pictures from, and I can agree it’s exciting. With a small con, it’ll be more specialized in a genre and have maybe 3-4 guests that are well known in that field.

For example, Magic City Con has started out very Bioware/video game themed, so there were voice actors from Bioware and video games such as Fallout 4 at the con. I’m still not over the fact that I did a Voice Acting Master Class with the award winning voice actress, Jennifer Hale.

Small cons also have less con goers, which means more space to walk around and more chance to talk to people. You’ll walk by the same person maybe 5 times in the weekend instead of getting a glimpse of a person and then they disappear in the crowd forever. I made probably over 20 new friendships at a small con than the drive by “Hey I like your cosplay” at a big con.

Along with small cons, the guests feel more comfortable at an intimate setting, which means hanging out with guests for free, because you get to remember they are awesome human beings who are very down to earth. That was the best thing I got to witness.

Going to Steak n’ Shake with (Fallout 4) Hancock’s voice actor, Danny Shorago and just hang out over burgers. My friends getting to play pool with (Dragon Age Origins) Alistair’s voice actor Steve Valentine. You won’t get moments like that often at big cons. 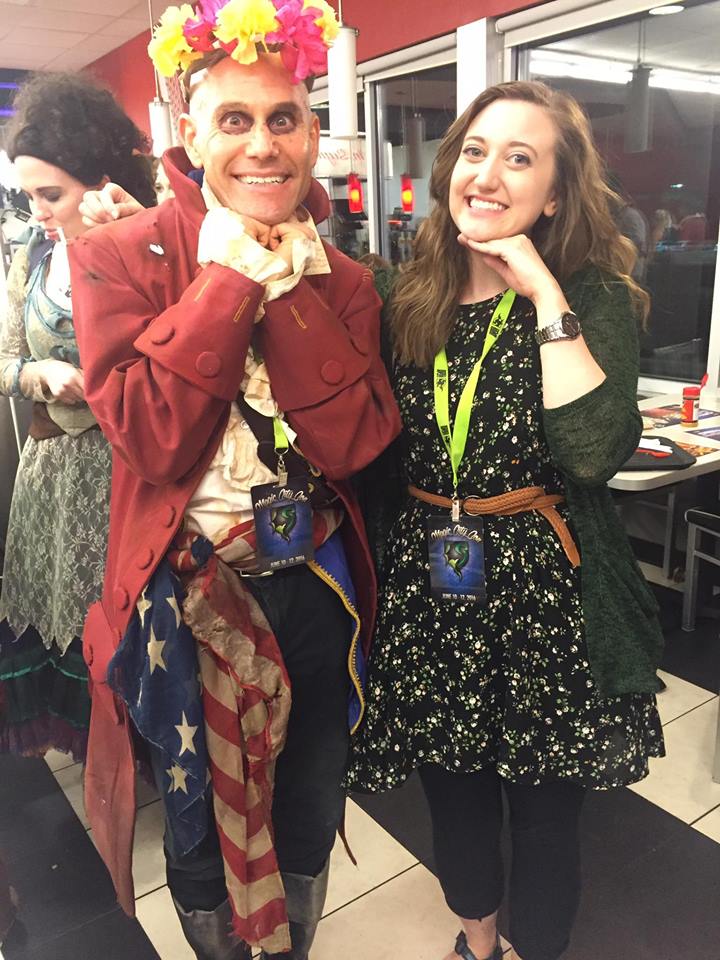 I love Dragon con with all my heart. It’s super exciting. The guest announcements make me squeal every year. The parties are huge and crazy. Walking the Marriott floor is a claustrophobic nightmare, yet as someone who suffers claustrophobia, I have never felt trapped in the crowd. I’m far too distracted by the people watching.

It’s true however, big cons are extremely expensive. Badges can start at $80, and that’s an early bird price. You definitely get the bang for your buck if you try to experience as much as possible.

With the amount of people and panels, it is very hard to interact with anyone. I feel like the best way to make friends at a big con is to go alone, as overwhelming that might be. You’ll make friends purely out of trying to survive among 60,000+ guests. Maybe instead of the show Naked and Afraid, they should make a Cosplaying and Afraid.

The panels are extreme time commitments as well. If you plan on going to big panels with actors in it, be ok with committing your time to waiting in lines, and missing many other panels you had marked on your schedule. I say go to the one or two big priority panels you have to make, but skip the rest of the big panels.

Go to small panels, parties, people watching areas, and bars instead. And to make up for skipping out on your actors’ panels, get in line to take selfies and professional pictures with your favorite actors at the Walk of Fame. It’s just way more personal that way, but of course it’s all up to how you want to remember your con experience!

Small Cons: Being at a “host hotel” without the host hotel price.

Small cons most of the time will take place at one hotel. That hotel is truly not associated with the con, so it’ll be cheaper regular price, unless it’s a busy holiday weekend. Along with the prices not completely breaking bank, being able to go upstairs to your room whenever you like is highly convenient.

You get the host hotel experience, without the phone war to get a spot, clogged elevators and crying wallets. That’s a major plus!

Multiple host hotels, means multiple venues for more panels, parties, etc. Which of course is very nice. Multiple host hotels however start a competitive phone battle to see who will score a host hotel room since they sell out in a matter of 5 minutes, and the prices are down right ridiculous.

Dragon con has overflow hotels as well, but the bad part is parking and walking commute to any of the venues is a bit of an inconvenience.

Which one to go to? BOTH!

The cons have wonderful opportunities of different kinds, as well as disadvantages of many kinds. The best thing is to stay open, expect nothing, and always try to experience everything you can.

Small cons are in the growing puppy phase learning new tricks. Big cons are the old dogs that learned all the tricks and now are just continuing to grow.

I hope this helps you plan out your future Con plans. Feel free to share this article, as well as share your con experiences in the comments.

Con Etiquette: The DOs and DON’Ts for a Nerd at a…

A Dragon Con Checklist: How to Get the Most Out of Your…