Who is bored of elves and dwarves? Uh…actually nobody really, least of which not me. Elves are dwarves are amazing! So do we really need to waste time discussing if we are tired of them? Shouldn’t we instead use our valuable minute looking at videos of red panda bears?

Still, even though we are settled on the fact that dwarves and elves are amazing, isn’t it nice sometimes to take a deeper cut and perhaps play a fantasy race that is a bit more unique and exotic? After all, these are fantasy worlds, so let’s take advantage of the fact that we can be imaginative here!

Here are 7 uncommon fantasy races to play. These are specific to the Pathfinder RPG and taken from the fantastic Pathfinder Advanced Race Guide, but could easily be converted for D&D 5e, provided you have a benign DM who allows awesomeness at the table.

7. Hobgoblin – With Pathfinder announcing the upcoming Ironfang Invasion Adventure Path that heavily features hobgoblins, wouldn’t it be nice to play one of those characters, except on the side of angels?

Hobgoblins are fierce, militaristic, and live a life for conquest. As such they both favor martial classes, while also distrust spellcasters, going so far as having an alternate racial trait that grants them +1 on attack rolls against spellcasters.

A cavalier would make a good class for a hobgoblin, if just that it would be fun to imagine a fierce warrior on horseback. A gunslinger would also be interesting, imagining a hobgoblin who somehow discovered early firearms, becoming a hero of his people.

All hobgoblin PCs receive a +2 dexterity and a +2 constitution, being that they are thick, muscled, and hearty. 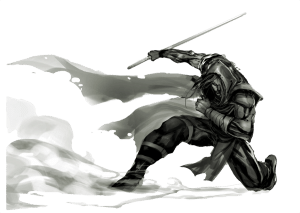 6. Fetchling – Descended from humans trapped on the Shadow Plane, fetchlings are creatures of darkness and light intertwined. (My head goes straight to Cloak and Dagger, but that’s just me.)

Unlike a hobgoblin, which would be a very rough-and-tumble, physical characters, a fetchling would bring a shadowy, magical nature to the table.

The racial traits of a fetchling bring a +2 dexterity and +2 charisma, but a -2 in wisdom, as they are often distracted by errant thoughts. They also gain a +1 bonus on shadow magic they cast.

In terms of classes, Fetchlings make for great oracles, sorcerers, summoners, or wizards. In episode 51 of the Glass Cannon Podcast, player Matthew creates a fletching character who is a magus, which is a martial spellcaster. 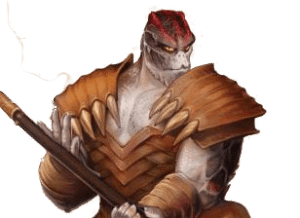 5. Nagaji – Snake people, y’all. Nagaji has scaled skin that resembles true naga and like serpents, have forked tongues and lidless eyes. Their eyes allow them once per day to have a hypnotic gaze that stops others in their tracks. But their physical forms are otherwise humanoid.

Nagaji are strong and forceful, so they get a +2 strength and +2 charisma, but they are a little slow on the uptake, so take a -2 penalty in intelligence. A fighter or monk as a favored class would work well with a nagaji player character.

At the GM’s discretion, a nagaji PC may have the ability to spit venom. If you hit your target they have to make a saving throw or be blinded for 1d6 rounds! 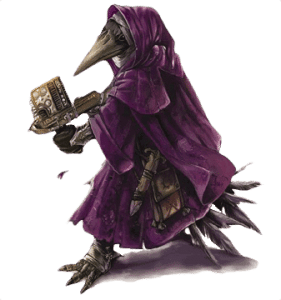 4. Tengu – Tengus are a crow-like race of scavengers and irresponsible thieves, which sounds just perfect for an adventuring group of murdering hobos. They are avian, so they have broad beaks and both their arms and legs end in talons. Although unable to fly, tengu do have dark, iridescent features that cover their bodies.

Tengu tend to be impulsive and lean toward chaotic alignments. As a result, few other races tolerate tengu, which could lend itself to interesting role playing.

Tengu get a +2 dexterity and a +2 wisdom, but they tend to be frail, so suffer a -2 in constitution.

A rogue is a perfect class for a tengu, but and oracle or sorcerer works quite well also. 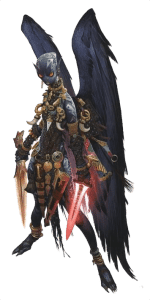 3. Strix – Strix aren’t often seen as their numbers are dwindling. Many are frightened of them, seeing them as nothing more than dark winged devils.

Unlike the tengu, strix do fly, having a movement speed of 30 on land, but a fly speed of 60. They are get a +2 in dexterity, but a -2 in charisma as folks are suspicious of them.

Strip make for good rangers, but they are perhaps best as a fighter, being that they may use the Airborne Ambusher racial archetype. Using swift strikes from above, a strip using the airborne ambusher archetype to lethally plummet down on foes.

A favored weapon of a strip is a snag net, which is covered in barbs and slipknots designed to trip an hold an opponent. 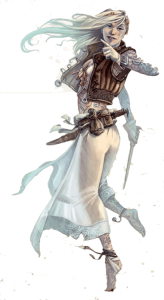 2. Sylph – Shy and reclusive, but ultimately curious, sylph are born from the descendants of humans and beings of elemental air (such as djinn). They tend to be pale and thin to the point of appearing delicate, as if a strong gust would wisp them away.

Sylph gain a +2 in dexterity and intelligence, but a -2 in constitution, considering their thin frames. They can have a variety of air / elemental traits, including Breeze-Kissed, which allows limited control of the wind.

Sylph make great clerics, wizards, and inquisitors, but it is perhaps a druid that makes the best class for a sylph. The Sky Druid archetype allows a sylph to use Wild Shape to take to the skies. 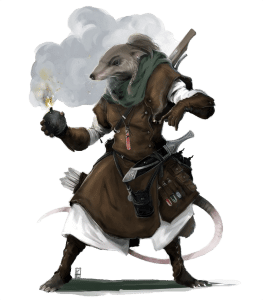 1. Ratfolk – Ratfolk are what they sound like: rodentlike humanoids. Originally native to dry subterranean areas, Ratfolk and now typically found in nomadic trading caravans. They are shrewd merchants and tinkerers, and those who take to adventuring are often driven by seeking new opportunities for trade.

Ratfolk receive a +2 in dexterity and intelligence, but suffer a -2 in strength. Ratfolk favor a wide range of classes, but gunslinger and alchemist are two of the top ones.

The Pathfinder Advanced Race Guide has several pages of great lore and additional content on ratfolk racial archetypes, such as the Gulch Gunner  and Plague Bringer. The gulch gunner is a gunslinger that specializes in cramped and heavily-trapped underground spaces. A plague bringer is an alchemist who specializes in disease-delivery armaments. Wash your hands.

There you have it, 7 of my favorite deep cut races from the Pathfinder Advanced Race Guide. There are literally dozens more in that book, so pick up a copy and get creative when you roll a new character. (And it’s a great book, even just to read.) Again, most can be converted to D&D 5e, so work with your DM to see what you might be able to do.

A Brief History of the Atomic Knights, Part IV