By Clave Jones On Nov 22, 2017 Last updated May 13, 2018
Share TwitterReddItPinterestFacebookEmailPrint

Nerds on Earth loves our Friendly Local Game Shops (FLGS), even though we are spread around the country.

Joe is in Florida, so he’s in Cool Stuff Inc country. Jason is in Atlanta, so hits up Heroic Games and SuperGames. We interact with Noble Knight, who are located in Wisconsin. And Clave hops between the Fantasy Flight Gaming Center, the Source, then Level Up Games in the Twin Cities area.

So even as a website, Nerds on Earth is anchored to our FLGS. Why?

Well, the main reason is often because we have cash burning a hole in our pocket, but the deeper reason us nerds visit our FLGS is because it’s relaxing to spend even 30 minutes browsing through the shelves and flipping through the comics, even if we might not even make a purchase. Our subconscious compels us…

Let’s talk about ‘Third Place Theory.’ Many of the FLGS listed above do an excellent job of utilizing third place theory, and I’m sure this is true of the local game shops in your area as well.

Third Place Theory and Your FLGS 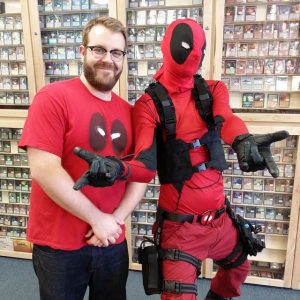 But you might be asking, what is third place theory? Well, it’s the psychological framework that says it’s essential for us humans to have a comfortable, accepting social environment that is separate from work and home.

Decades ago we had bowling alleys, arcades, supper clubs, and those little lounges where the characters from Mad Men made smoking Marlboros look so glamorous. But third spaces became a little more rare, until that void was replaced by coffee shops. This is the primary reason that Starbucks had its meteoric rise, spawning a ton like-minded cafés, all of them aiming to tap into third place theory. Sure, they sell coffee but they also double as co-working spots or places to meet with friends.

Us nerds? Well, we have our FLGS, our third space that serves as a comfortable social environment outside of home or work (or school). Even if we feel like getting away for just an hour, many of us think first about our FLGS. 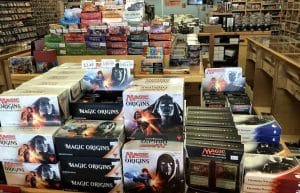 Our local FLGS has long used a model to employ third place theory: gaming space. A Twin Cities great–Level Up Comics and Games–does so well in creating community around gaming space that they host Magic every night of the week, in addition to tons of other events for board gaming, D&D, and Pathfinder.

But hosting tournaments, encouraging drop-in gaming, and participating in organized play isn’t printing free money. It’s the opposite, actually. After all, the owner is covering rent on square footage that us nerds expect to use for free.

On top of that, the shop owner has to cover costs of cleaning and maintenance for the space as well, which is not nothing when you consider that many geeks feel entitled to treat the space with less respect than it deserves. 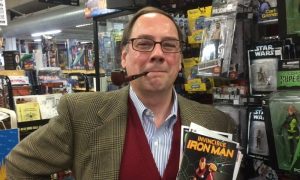 Plus, if you want someone to stick around and socialize, you’ll need to feed them. So that’s why concessions are all the rage with game shops now, as the food and drink anchor people to your store. The intentional side effect is the longer you stick around the greater likelihood you’ll splurge on a pack of card sleeves or whatever.

But it is equally true that game and comic store owners are geeks themselves, so it makes their heart happy to see a community of nerds in their shop enjoying one another’s company. Come for a game of Magic; stick around because you are fueled up by Cheetos and Mountain Dew.

The alpha game shop in Minneapolis is likely the Fantasy Flight Game Center. They don’t just offer Coke and Snickers bars; they have a full service restaurant with burgers, salads, fries, sandwiches, and beer on tap. Instead of working remotely from a coffee shop, I’ll often spend the day at Fantasy Flight, soaking up their WiFi while writing a couple of posts for Nerds on Earth (like this one). But before I leave I’ll often spend a few dollars on mini paint of course.

Many of these ventures will unfortunately fail however. While it might seem logical to combine food and gaming, those two things are entirely different business models that can easily spread an already overworked shop owner incredibly thin. This is why we typically only get Cheetos and Mountain Dew, as the logistics of operating a grill and maintaining a liquor license while also keeping shelves stocked with Warhammer can be financial ruin. 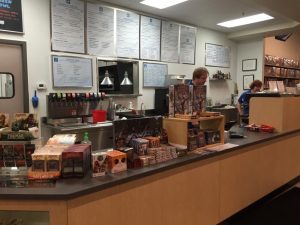 What’s my point? An FLGS is an important part of being a geek. Not just that, they are an important part in our socialization as human beings. While work and family responsibilities (coupled with my social anxiety) prevent me from visiting my local FLGS with the regularity needed to form friendships, I still love nothing more than anonymously browsing through the books, games, and everything else my nerdy heart loves.

Having a third place is vitality important to us as social beings, understanding that we are much more than merely commercial creatures. So let’s thank our local game shop owner for working so hard to provide us nerds with the places we love!

In fact, Nerds on Earth is a ‘thank you’ to the FLGS. My favorite shop in the Twin Cities has a D&D and Pathfinder display off to the right, as soon as you walk in the door. They have a GIANT wall of board games to the left. In the back is a comic book section, and rounding out the store are used video games, Funko, and more.

And what are the three primary areas of content at Nerds on Earth? Well, it’s D&D, board games, and comics, just like our favorite FLGS.

But that is only half of my favorite shop in the Twin Cities. The other half is a HUGE play area, filled with tables that allow nerds to laugh and play together. Nerds on Earth wants to replicate that sense of community as well.

Being that the Internet has rightly or wrongly become the new third space for many nerds, we want Nerds on Earth to be a part of this vital social element. So please join us in our Facebook Groups created for nerds just like you:

Nerds on Earth 616 is devoted to comic books.

Character Sheets is where we geek out about D&D, Pathfinder, and Starfinder.

The Boarderlands is our group to discuss board gaming.

The Drift, our group dedicated to nothing but the Starfinder RPG.

We’ll have a hard time passing Cheetos through the computer screen, so it’s not quite the real thing. But we hope Nerds on Earth can be the best third space on Earth for nerds outside of your Friendly Local Game Shop.

What’s Next in the Upside Down? Stranger Things 3 Predictions

Should you pay for table space at your local game shop?