By Clave Jones On Mar 12, 2018 Last updated May 13, 2018
Share TwitterReddItPinterestFacebookEmailPrint

Marvel is rebooting their comics yet again, a move that will surprise absolutely no human, Kree, or Skrull in the 616. At this point, Marvel is like that dumb kid who–try as he might–just can’t stop himself from sticking his tongue to cold objects.

So, we’re unsurprisingly getting new Marvel #1s in 2018. But what other trend might be coalescing in the comic book industry just beneath the surface? Let’s discuss a trend that can be summed up in one word: divergence.

There are two very difference comic books audiences and those two audiences continue to diverge. Marvel comics finds themselves standing at a fork in the road, staring at a difficult choice created by the current comic market realities.

The trail that forks right leads straight to comic shops (the Direct Market), or our FLCS (Friendly Local Comic Shops) for us old school comic readers. And there is nothing about the comic shop business that makes sense. Let me explain. 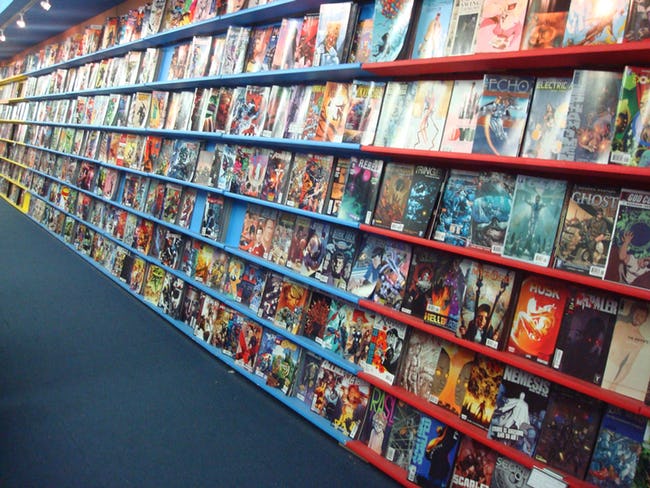 First, don’t conflate Marvel movie money with comic shop money. Comic shops are small businesses with very thin profit margins. Comic shops specialize in little 25-page $4 floppy pamphlets filled with colorful characters that have been around for decades. Small shops need tons of rack space for the hundreds of titles, yet they only sell 1 or 2 copies of 90% of the titles. As a business model, it’s nuts.

Worse, these comic shops are completely inaccessible to the vast, vast majority of the population who are confused as to why half the inventory is wrapped in mylar. The hurdles one has to clear in order to make their first comic shop visit are immense. Listen, they have a reputation. Comic shops are no one’s idea of cool and are notorious boys clubs, often downright hostile to any potential female audience. We all know this.

This creates a very insular clientele for comic shops. I should know, I’m one of them, as are the majority of the writers for Nerds on Earth. We’re downright wistful in our Nerds on Earth Slack channel when we talk about Marvel comics. Shoot, when someone mentions Chris Claremont X-Men there is a flurry of GIFs that hit the feed, all emoting the nostalgic happy tears of grown men who have grown up reading comics in a certain way in a certain era.

And we have opinions. Boy, do we have opinions. Marvel is smart to chase our money but in doing so, they also have to cater to our nostalgia in very particular ways. Comic Shop owners are old school comic fans also, so they share our nostalgia. But they carry the immense pressure of also having to pay their electric bill.

One more quick thing about the comic business. The distributor is Diamond Distributors, who delivers comics like clockwork every Wednesday to the hundreds of itty bitty comic shops across America. But unlike books–which can be returned by bookstores for credit if unsold–comics are non-refundable. Comics shops owners have to pay up front for product that they might not sell and they are on the hook if they don’t. So if they order too many copies of Marvel’s latest relaunch title, they’ll simply end up in back issue bins at a loss. Again, as a business model, it’s nuts. 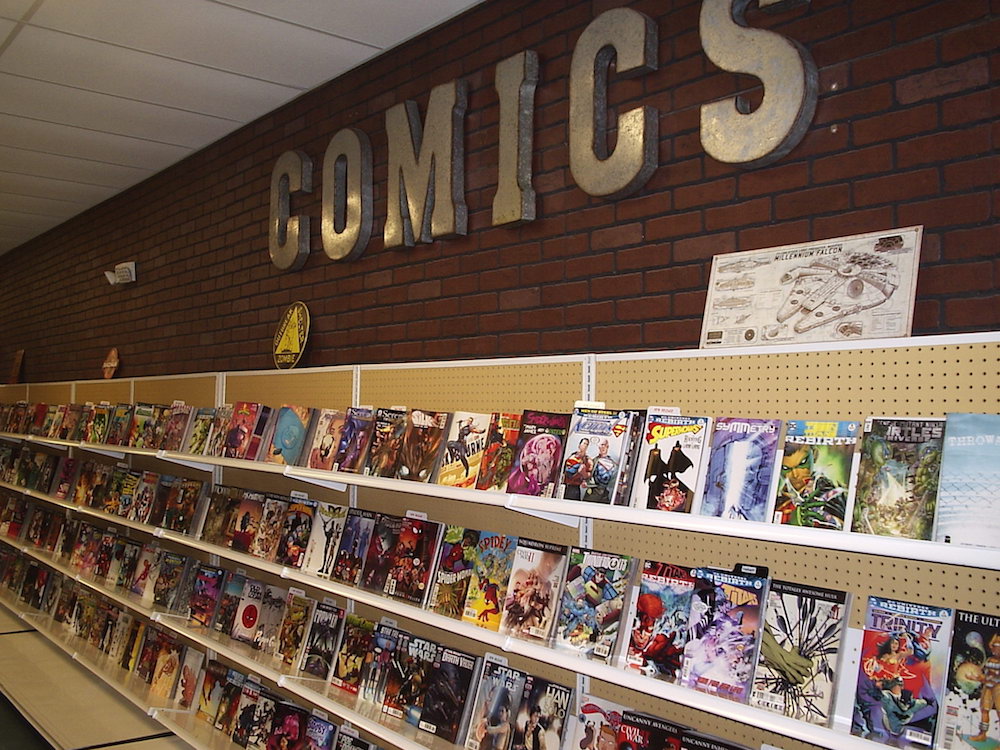 But don’t count comic shops out yet. They replaced the drug store spinner racks in late 70s and have been going strong ever since. They’ve lived through the rise and fall of video rental shops. Comic shops have also seen CD music shops tumble, yet they persist. Comic shop owners are heroic small business owners fighting a battle against galactic foes, so don’t count them out.

If Comic Shops (the Direct Market) is the right fork in the road, the Trade Book Channel is the left fork. In thinking about trade books, imagine graphic novels and manga titles. Remember, all those floppy books are collected into trades, meaning the same stories that are sold in comic shops are also sold in bookstores, digitally, and cheaply via Amazon. And quite frankly, collected trades are easier to digest and collect. No hustling up missing issues.

Meanwhile, these trade book channel sales show no signs of slowing. Indeed, a new generation of readers are discovering colorful stories for elementary and young adult audiences in interesting places.  Publishers and distributors have learned how to create and market content for this young audience, and it doesn’t involve comic stores.

Small publishers are getting this. BOOM! Studios president Ross Ritchie was asked directly about the sales drop: “Are you seeing that equally in the comic store and book channels?” He replied, “No. We’ve had a lot of growth in the book channel.”

My oldest daughter is in 4th grade and loves superheroes, just like her dad. I’ve attended numerous Scholastic Book Fairs with her at her elementary school. The hot ticket items? Stuff like the Squirrel Girl books and Moon Girl and Devil Dinosaur graphic novels, plus tween and YA graphic novels like Sisters and Smile. And DC is killing it with their DC Superheroes books for young girls. Needless to say, us crusty old nerds aren’t talking about Moon Girl and Devil Dinosaur in the Nerds on Earth Slack channel.

These are two roads divided in a snowy wood. Can the comic book market survive segmentation between two increasingly distinct and divergent audiences, particularly when the economics, publishing strategies, and distribution systems are distinct for both? It’s a trend to watch.

Marvel needed to sell their characters to pull out of bankruptcy in the 90s and somehow comic shops survived. Never count them out. But when the numbers say that any sensible decision lies along the left fork of the road, is there any reason why for comic shops not to finally succumb to the economic realities?

DM Tools You Should Use: Stat Trackers