An 8-Year-Old Reviews the DC Superhero Books for Girls, and It’s Adorable 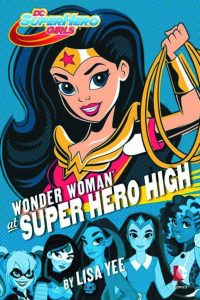 Warning, I’m about to gush like the juicy part of a pack of Gushers gum. My 8-year-old daughter has been reading the DC Superhero Girls books.

She said, “Dad, you should write about these books on Nerds!” (That’s what she calls this website: Nerds!, always with the extra exclamation.)

I told her that if she wrote the review, I’d post it. She did, now I am.

First, a little bit about the books. There are two in the series thus far, one starring Wonder Woman and one starring Supergirl, but more are on the way. Although there are also comics and graphic novels that tie-in, these are book books. They are written for girls of all ages and they follow the adventures of Wonder Woman, Supergirl, Batgirl, Harley Quinn, Poison Ivy, and other female DC characters.

The premise is that the heroes attend Super Hero High School, which isn’t like most high schools obviously! But are the books any good? Let’s ask an 8-year-old:

Hi, my name is Campbell. This is a book review on a book called Wonder Woman at Super Hero High. It is a really good book. I like it because all the characters are courageous and strong.

I like it also because they inspire me to be a Hero in my one way and other things too (and they’re SUPER awesome). In the book, Wonder Woman finds her one way she can fight and be a Hero.

I recommend that you read it because in the beginning it’s cool and the same thing with the end of the book, it’s Super Cool!!! With Supergirl and Batgirl by Wonder Woman’s side their team of Super Heroes is unstoppable!!!!!!

Look, I’m a 42-year-old dad, so I haven’t actually read the book. I don’t personally know if it deserves all six exclamation points. I’m taking the word of an 8-year-old on this. These books weren’t written for me and that’s what I think is what is most amazing about the books.

The fact that the line of DC Superhero Girls books even exists fills me with joy. And I hope that it warms your heart also. To give young girl readers a collection of books, comics, and action figures that are marketed to them is an excellent thing. (Oh, yes, there are both 12″ and 6″ action figures that tie-in and you better believe that my daughter is trying to collect them all.)

Campbell’s review had some spelling errors and she mixed up their and they’re, which caused her dad to hyperventilate a little bit. But she’s eight, so let’s all calm down. The real story here is that the core of what Campbell pulled from the book is that she can be a hero. Pardon me as this dad must have gotten a little pollen stuck in the corner of his eye.

Now here is where ‘ole dad being a life long Marvel zombie throws some shade at Marvel. I looked for similar books for girls that featured Marvel characters. They don’t exist.

It’s already been well chronicled that Marvel has been reluctant to feature their female characters as action figures or in media outside their comic books, so let’s not spend too much time on this. Sources say that Marvel honcho Ike Perlmutter has been the primary stick in the mud that has prevented Marvel from reaching out to young girls. But to Marvel’s credit, steps have been taken to marginalize Perlmutter, so here’s to hope that we’ll have even more great products for young girls in the future.

So even as I want my 8-year-old to read positive, encouraging, appropriate stories that feature Marvel heroes, I’m thrilled that the DC Superhero Girls line exists.

8-year-old Campbell is thrilled they exist as well!

If you have a young daughter, niece, or neighbor, you should give the DC Superhero Girls line a look and let a friend know about it as well. I’ll link you to the major product lines:

Wonder Woman at Super Hero High (the one my daughter reviewed). Get it here.

Supergirl at Super Hero High (the 2nd in the series). Get it here.

The 6 inch action figures, featuring Wonder Woman and Supergirl. Get them here.

The 12 inch figures. Get them here.

And as best as I can tell, here’s the full product line for you to peruse.