“Hey, who’s the guy without a face?

That’s easy—it’s the Question, a two-fisted investigative journalist created by Steve Ditko in 1967. 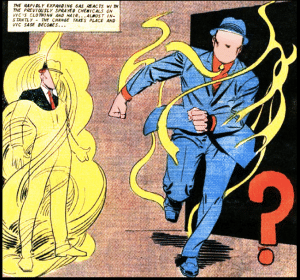 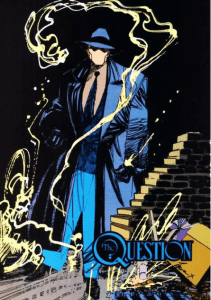 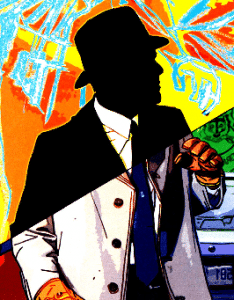 [Pic] Is it Greg Rucka’s Renee Montoya, a disgraced ex-cop who gets caught up in an evil cult? 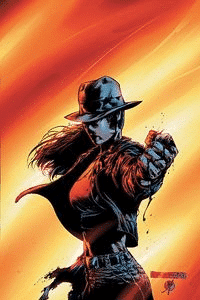 [Pic] Hell, maybe it’s any one of the  alternate universe variations, whether it’s Rorschach, Alan Moore’s tragic, morally-inflexible, monosyllabic tragic vigilante, or the parody-of-the-parody of Frank Miller’s urban crusader from The Dark Knight Strikes Again, or even Grant Morrison’s postmodern deconstruction-of-a-parody-of-a-parody from Multiversity?

Some questions don’t have answers.

[tw-divider]Nerds On Earth Presents: A Brief History of the Question, Part 1[/tw-divider]

Welcome to the Nerds On Earth History of The Question! For the next few weeks, we’ll be digging into the history of one of this extraordinarily interesting and enigmatic figures. This is our second such series; the first, an in-depth and unnecessarily exhaustive investigation of Silver Age heroes the Atomic Knights, can be found here!

The Question has had a long history, and it all starts with one man.

Steve Ditko was born in 1927, and that’s probably the only thing you don’t know about him. He came up with Spider-Man’s costume. He created Doctor Strange and the trappings of that character before leaving Marvel to work at Charlton Comics, where he invented many characters that would later find a home at DC, including Captain Atom, Blue Beetle, and, of course, the Question.

At DC, he introduced us to the Creeper, Hawk & Dove, and Shade the Changing Man. Due to a nearly pathological need for privacy, he was often overshadowed by more skilled self-promoters like Stan Lee or Jack Kirby. There were substantial stylistic differences between Kirby and Ditko: his characters were sinewy instead of brawny, fearful and malevolent instead of square-jawed, dark twisted shadows instead of grand starscapes. But make no mistake: although the Creeper doesn’t sell as many movie tickets as, say Captain America, it’s unquestionable that comics would be poorer if Ditko had never come along.

The seeds for the man we’d come to know as the Question were planted in 1967, in a magazine called witzend, where Ditko introduced the world to a man named Mr. A. 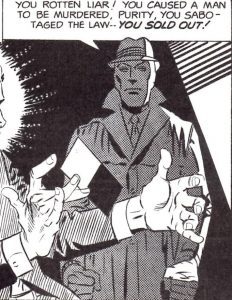 You can’t understand Mr. A without first understanding something called Objectivism, a philosophy named and shaped by every college freshman’s favorite writer, Ayn Rand. According to Rand, reality was objective, rather than subjective; that is, moral and ethical principles existed independently of whatever personal philosophy you might have, or what the prevailing opinions of the day happened to be. For Objectivists, there is black, and there is white. There are no shades of gray. There is no compromise. A is A, and cannot be sort-of A, or a little bit A. Good is good, and if it isn’t good, it is by definition evil.

With me so far?

Ditko was a fan of Ms. Rand’s work, and set about trying to give the philosophy a champion. He came up with Mr. A, a man with a metal mask, two fists, and the ability to make an entrance. 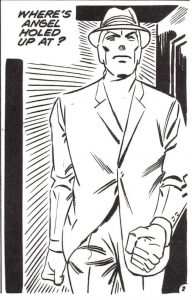 Over the course of his appearances in witzend, Comic Crusader, Sense of Wonder, and others, Mr. A fought crooked politicians, murderers, thugs, goons, and all the tooth-gnashing ne’er-do-wells Ditko could coax from his pencil. When he went to work for Charlton Comics, Ditko brought Mr. A’s philosophy and pugilistic method of instruction with him in the character of the Question.

The Question is fundamentally the same as Mr. A. There’s the same moral code, the same thirst for truth over all things. The Question is Mr. A with a slightly fancier mask. But it set the stage for what was the become one of the most fascinating and underrated runs of any comic book in the 80s.

But that’s going to have to wait for next time.

Ross Hardy is the author of Cafe Noir, and the recently-released all-ages comic the Library of Alexandria!

An 8-Year-Old Reviews the DC Superhero Books for Girls, and It’s Adorable