Well now. It’s good to be here again, discussing the Question. It seems like just yesterday I was talking about Steve Ditko’s just-a-little-bit crazy metal-fisted vigilante, Mr. A. If you haven’t read that, or the second, third, or fourth parts of this series, I invite you to do so now (or not, I’m not your mom).

This series has attempted to answer a question (no pun intended) about this unique character: when you can be anything, what are you? The Question, as I’ve said before, is a blank slate. He can assume any form we need him to, making him an extraordinarily versatile storytelling device. He can be a crusader, a monk, a mystic, or a murderer (note that I didn’t have time to get into his appearances on Justice League Unlimited, during which he became a conspiracy theorist so paranoid it looped around to being funny again).

But here’s something we haven’t investigated: If The Question can be anything, why can’t he be anyone?

[tw-divider]Nerds On Earth Presents: A Brief History of the Question, Part V[/tw-divider] 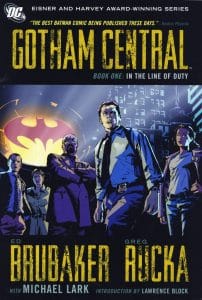 Let’s start with the obvious: Gotham Central is one of the best comics DC has ever published. The dream team of Ed Brubaker, Greg Rucka, and Michael Lark produced not only some of the coolest Batman stories ever written, but some of the best crime drama, period.

Choosing to draw the focus away from Batman and on the desperate, beleaguered cops struggling to keep up with all the freaks, maniacs, and psychopaths in Gotham was a fantastic decision. For just one example: “Soft Targets” is a story arc in which the Joker paralyzes a city with fear after a series of seemingly random sniper attacks. There’s a scene in a police station that should be very familiar to anyone who’s seen The Dark Knight–just replace Batman with an angry dude with a phone book, and you’ve pretty much got it.

Out of Gotham Central comes Renee Montoya (who was technically created earlier, for Batman: The Animated Series), a deeply flawed young woman, struggling with her anger, her sexuality, and her relationships, not only with her family, but with her partner, Crispus Allen. The characters in GC are great, but of all of them, Montoya emerges as a vital, driving force. So when Greg Rucka joined Grant Morrison, Mark Waid, and Geoff Johns to write the weekly series 52, he brought her with him and made her an integral part of the story. 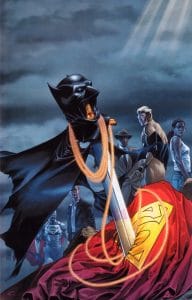 I don’t want to spend too much time summarizing 52, so I’ll let this guy do it. The ten-second pitch: it was a weekly series that followed a bunch of sidekicks, jokes, and B-Listers around the entire DC Universe for a year. Steel, Booster Gold, Elongated Man, Doc Magnus, and, crucially, for our purposes, Renee Montoya.

Montoya’s part in the series picks up right after Gotham Central, the last issue of which saw Renee making a very important decision. We see the consequences of that decision in the beginning of 52–she’s drunk, angry, and getting into a lot of trouble. That’s when she meets a man without a face. 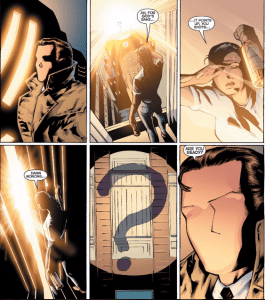 Adventures ensue. There’s quite a bit to go into, so I won’t–suffice it to say, there’s a Bible of Crime, rat poison, Batwoman, and at least one crocodile man. I don’t want to spoil a decade-old comics series, so I’ll just say that a certain series of events leads to Montoya taking on the mantle of the Question. And that’s when the final element, the missing piece of this character, finally falls into place. The Question has always been adaptable. But now there’s legacy. 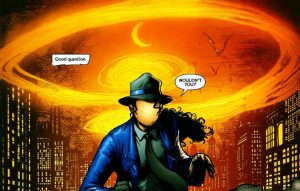 I don’t need to tell any Nerds On Earth reader how important the concept of legacy is to comics. It’s the difference between a character languishing in some copyright lawyer’s filing cabinet and spawning a multimedia empire. Without legacy, a Robin is just a bird and Miles Morales is just a background character in somebody else’s alternate universe. But with legacy comes longevity. It opens the door to new stories being told, new worlds to explore.

And new worlds is what the Question is all about. With every iteration, there’s another concept, another hook, another style, another way to completely re-invent this otherwise generic crime fighter. You can’t do that with Batman, or Superman, or the X-Men. But with someone whose identity is such a mystery, it happens easily.

Under normal circumstances, here’s where I would wrap up–I was considering something like “And what is that identity? That’s the question.” Smash cut to black, roll credits. But that wasn’t the end of Vic Sage, Renee Montoya, or the Question. 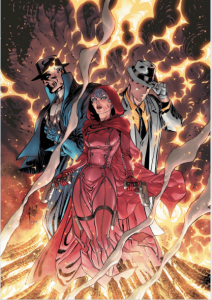 But I feel like the less said about that, the better.

Is this Nerdy?, pt. 1: Jon Sudano and His YouTube Covers