[tw-divider]Nerds On Earth Presents: A History of the Question, Part IV[/tw-divider]

We’ve already seen how easy it is for writers to adapt the Question–a literal blank slate–to their needs. But what happens when someone comes along and tries to turn the character, not into something new, but more of what he used to be?

In the 80s, famed writer, magician, and awesome-beard-haver Alan Moore had an idea for a comic that would destroy everything we thought we knew about superheroes. He wanted to show all the sex, violence, meanness, and occasional moments of hope that would be a part of a world where superhumans were far less super and far more human. It would eventually become Watchmen, and if you haven’t read that one by now, there’s not a whole lot I can do for you.

When Moore pitched Watchmen, he wanted to use the characters that had been published by the now-defunct Charlton Comics: Blue Beetle, Peacemaker, Captain Atom, Nightshade, and, of course, the Question. But DC had plans for those characters, including assigning Denny O’Neil a Question series (which we discussed last time). Not one to be deterred, Moore simply tweaked the characters a hair, changing them just enough to be legally distinct. That’s how you get the Comedian from the Peacemaker, Nite Owl I & II from Blue Beetle, Silk Spectre from Nightshade, Ozymandias from Peter Cannon, Thunderbolt, and, of course, Rorschach from the Question.

With Rorschach, Moore takes all of the most extreme elements of the original Steve Ditko Question, even going back to Mr. A, and…well, I’ll let Mr. Tufnel explain:

He actually doesn’t have to exaggerate too much. The uncompromising, unflinching Objectivist crusader that was present in those original comics is indistinguishable from Moore’s take on the character. Everything about Rorschach, down to the mask, is meant to evoke Mr. A’s, and later the Question’s, black and white absolute worldview. The black and white of Rorschach’s “face” never mix. So when Ditko wrote about how man has a choice between absolute good or absolute evil–

It isn’t hard to imagine him appreciating Moore’s equally committed Rorschach, the man who dismembered a child murderer, refused to obey an unjust law, and followed his own convictions to his  (thirty-year-old spoiler alert) own death. And considering that Rorschach was the clear breakout star of Watchmen (it must be the coat), it’s got to be said that Moore succeeded in creating a great character.

Here’s the thing, though–Moore didn’t want Rorschach to be a great character. Moore did everything he could to make Rorschach unsympathetic. He lives in filth. He hates women. Those convictions? They don’t help him when he dies weeping, alone, in the snow. Moore wanted to show how sad and twisted somebody who held onto that Objectivist philosophy would actually be. But in doing so, he accidentally tapped into something others would notice many years later–we like our heroes to be uncompromising. We love it when our characters stick to their principles, even unto their own deaths, even unto the complete and utter destruction of the world.

Also, I just have to point out that if Moore didn’t want people to like Rorschach, he shouldn’t have made him such a badass.

Watchmen in general, and Rorschach specifically, were vastly, enormously influential on the entire Western comic industry, spawning, along with Frank Miller’s The Dark Knight Returns, the “grim and gritty” mood of the late 80s and 90s. It’s not surprising that it would spawn imitators. And here’s where things start to get topsy-turvy, because by the time we get Frank Miller’s Question in The Dark Knight Strikes Again… 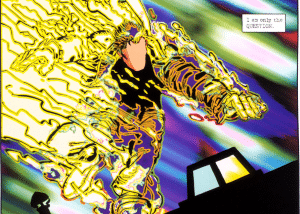 Or Grant Morrison’s Question in Multiversity… 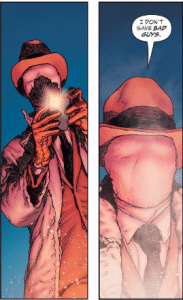 We’ve got a version of a character that’s based on another character that’s actually meant to be a parody of the original version of the character. Especially in DKSA, the Question is an absurd, myopic Cato Institute wannabe who claims he’s “no Ayn Rander!” because she “didn’t go far enough!” In Multiversity, the Question is more introspective, but subscribes to a bonkers theory about universal colors (although, to be fair, part of that might be my inability to understand what Morrison is trying to say. Either way, it’s nuts).

Again and again, we see that the Question is a canvas. The readers can project whatever they want onto him, and the writers can turn him into whatever they want him to be. None of these interpretations of the character are wrong, and that’s what makes this such a fascinating exercise. The Question can be used in ways that, say, Batman or Superman couldn’t. He can be inserted anywhere, at any time, and made to be a new man (or woman, as we’ll see later), with no stumbles. Because, of course, he doesn’t have any answers. He’s just the Question.

Being a Nerd Dad: Hot Holiday Gifts for Little Nerds