Some comic book panels stick with us long after we have read them. They even give us chills years later when we happen upon them, by accident or otherwise, when we reread the comic. Like a whole comic book series, the best comic panels never really leave us. They occupy a long box in our mind.

For me, this is especially true of Alan Moore’s Miracleman. No one ever forgets the first time they read anything by Alan Moore, arguably the best comic book writer the genre has ever seen. Moore has the ability to grab a reader’s attention and never lets it go. 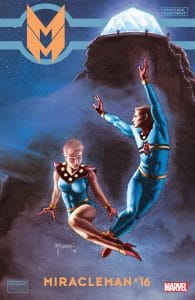 In a series that is replete with iconic panels from a magnificent Who’s Who of comic artists from the 1980s, the image that always stuck with me is the last page of Miracleman issue 16, the final page of Book 3, Olympus. It was the last word on the character from Moore, and it’s a hauntingly beautiful rumination on where the series had been and where it would be going in the future.

I was lucky enough to pick up the Alan Moore issues in the late 1990s on the cheap, well after the collections had gone out of print and both them and the individual issues began commanding hefty price tags. I actually got the first ten issues from the dollar bin, while the remaining six issues proved to be a pricier endeavor.

Like many comic fans, Moore wasn’t someone I had read until I got into college. Not to sound pretentious, but Moore wasn’t necessarily writing the kind of books that most teenagers of almost any era would get. There’s too much he’s bringing to the table. It was the 90s. I, like many others, needed busty cleavage, extreme explosions, and multiple pouches to keep my attention. Moore patiently waited for us to grow up and move past all of that nonsense.

With the tutelage of a local comic shop owner, I was well educated in all things Alan Moore (along with the comics of Howard Chaykin and the novels of Philip K. Dick) by the time I earned my bachelor’s degree. I devoured everything I could get my hands on that had Moore’s name on it. His work was amazing, but Miracleman always impressed me the most. 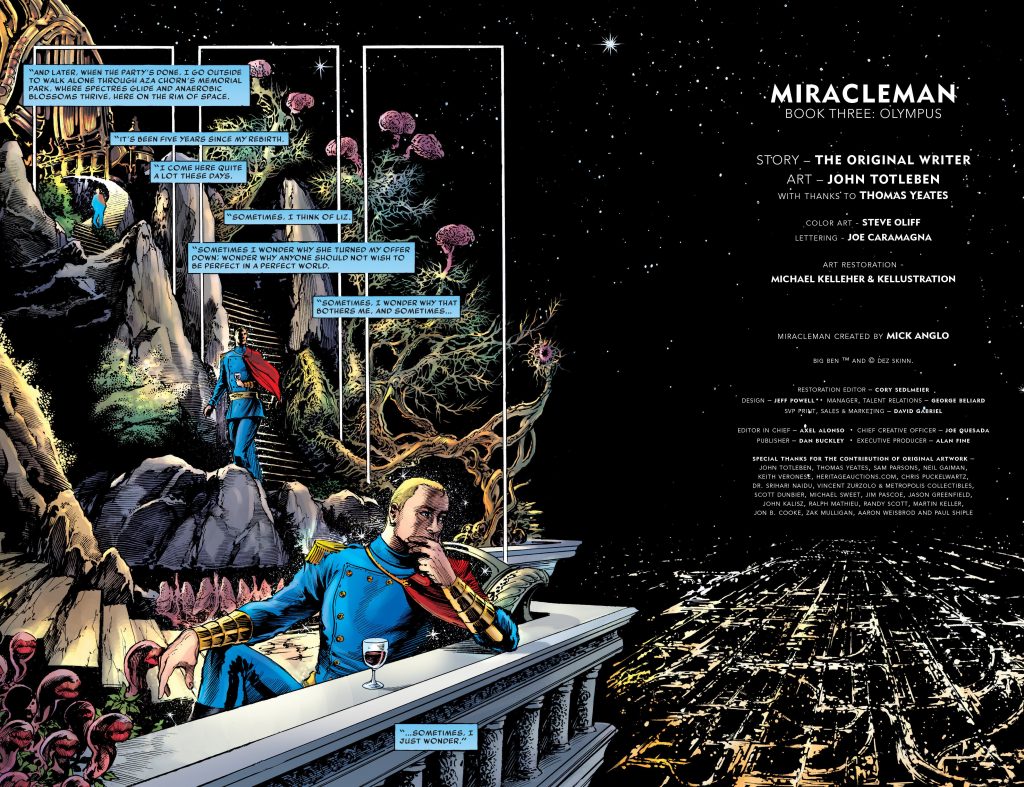 For those who haven’t read the series (and if you haven’t, do so: the books have been blessedly reprinted in recent years), let me situate the story of issue #16 for you: the heroes, as they are often fond of doing, have won. Miracleman and the other superhumans and aliens have saved planet Earth from the deprivations of a maddened Young Miracleman.

However, Moore took their victory to the next logical, realistic step: Miracleman took over the Earth. It wasn’t an evil takeover, but it was no less totalitarian. Miracleman and the others were essentially gods on a mission to remove poverty, violence, bigotry, and all the other ills of society.

If Superman (men?) were real, would he (they?) allow human suffering to continue? The last page finds Miracleman ruminating on his success, and it works magnificently.

It’s Splashy. Splash pages can be used and misused in a multitude of ways. They can show off cinematic action scenes, or highlight cheesecake pin-up fodder, or show something moody and atmospheric. The latter is true for the last page of Miracleman. The God-Hero alone in his thoughts, looking out over a world that he has saved, wondering if it was the right thing to do. It’s a seductively melancholic way to end a series.

The splash page in issue 16 is not wasteful. It’s an epitaph, a eulogy to the price of success and the sacrifices made along the way. 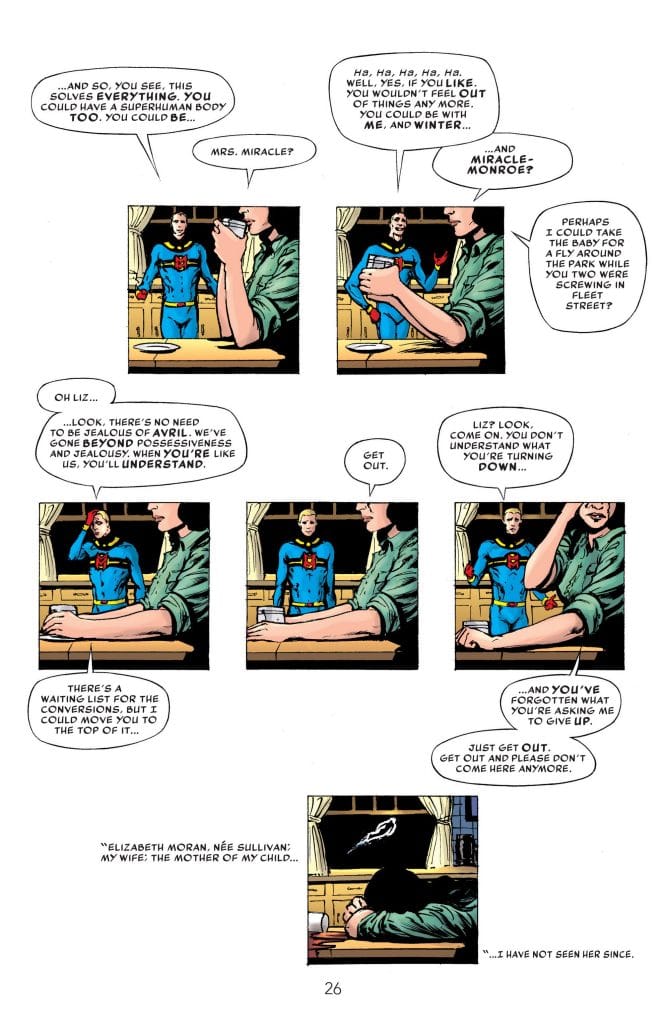 It’s Existential. Just a few pages before, readers see the final exchange between Miracleman and his estranged human wife, Liz. Their daughter, a highly evolved infant, has left the Earth. Miracleman himself has left humanity as well. Mike Moran is gone. He’s lost touch with what it means to be human having been Miracleman so long. Miracleman offers Liz what he thinks is the greatest gift one can receive, to be a god. Yet Liz rejections him. Miracleman flies away with little emotion.

In that final panel of issue 16, readers in fact find Miracleman struggling with the idea of that rejection. The painful last words on the page reveal that godhood does not guarantee freedom from remorse. Could Liz, a mere human, actually be right? Do the ends justify the means? There remains in Miracleman a lingering doubt if it was all worth it, proof that a god can struggle with his own divinity.

It Sets Up Gaiman’s Run Beautifully. This remaining doubt that Miracleman has sets up Neil Gaiman and Mark Buckingham’s run on the title perfectly. “… sometimes I just wonder.” In many ways, the entirety of Gaiman’s run is an exploration on these final words, pulling at the thread of living in a world imposed by a superhuman God-Hero.

Gaiman’s run is very different than Moore’s run. Gaiman spends most of his time exploring the lives of the average and the not so average people living in a transformed world. Miracleman becomes a supporting character in his own book, aloof and transient, barely there, allowing the reader to continually revisit that last page of issue 16. Gaiman’s Miracleman is in a perpetual state of looking over his spoils of victory atop his fortress of Olympus, pondering his success.

It’s as if Miracleman never really left that balcony.

The end is nigh! 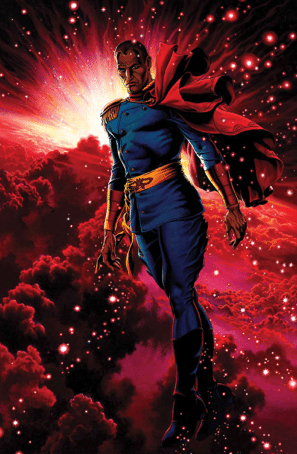 What are the conclusions of all that soul searching? Unfortunately, we don’t know because the book was never finished. After protracted legal battles, Miracleman was finally obtained by Marvel in 2009.

While this eventually led to the Moore and Gaiman runs to be finally put back into print and the reprinting of several trades of the original Mick Anglo material from the 1950s, the promised last two books of Gaiman’s run have yet to be published almost a decade later.

However, at this year’s San Diego Comic Con International, Marvel promised that the second book, The Silver Age, will finally be published in 2019. It’s the perfect time for everyone, veterans and newbies alike, to revisit the series.

As mentioned above, Marvel has reprinted all three of Moore’s books along with the first trade of Gaiman’s run. There’s no excuse to not pick this book up! The conclusion could finally be on the horizon over a quarter of a century later!

The last page of Moore’s run is a pivotal moment in the series, especially if Gaiman ends up delivering his three “books” as promised. It’s the halfway point in a saga that asks readers to abandon the childish notion that Superman is only here to help. His (or her) assistance may come with strings attached. Afterall, Miracleman is not asking for your permission.

What would really happen if Gods walked among us? Alan Moore wondered about that himself. Maybe Gaiman will finally give us that answer.

Other Iconic comic book panels: Face it, Tiger. | No More Mutants | Vader’s NO | Professor Xavier is a Jerk.

Starfinder’s Beginner Box: A Great, Affordable Way to Start in the Starfinder Universe

Who knows what sound an Owlbear makes? Seriously. Who?

Gjallerabru: How an Iconic Comic Book Panel was Brought to Life in the MCU

7 Alan Moore Stories Worth Reading (Outside of the Usual…