Comic books are known for their individual panels. The overwhelming majority of them are given a quick glance, only to never be thought of again. Then there are a special few comic book panels that stand the test of time and take on an iconic status.

“No more mutants.” is one of those rare iconic panels, but perhaps there is none more iconic that the comic book panel we’re going to spend a little time wit today: “FACE IT, TIGER…YOU JUST HIT THE JACKPOT!” 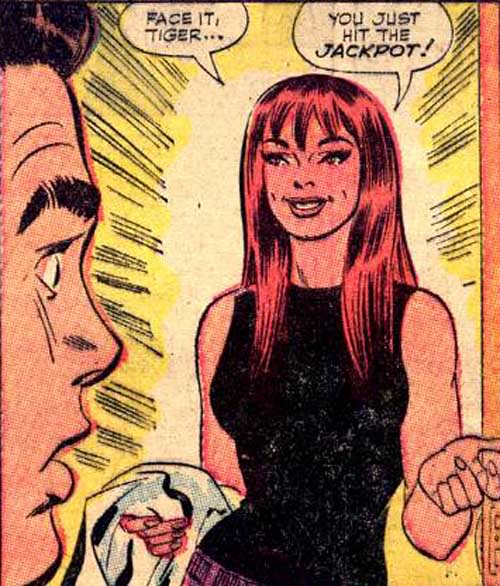 It’s hard to fully qualify what makes something iconic. At times the word is overused, while at other times we can completely miss the beautiful simplicity of something that has been there all along. But there is no question that this panel is iconic. In fact, it’s been often been listed as the number one comic panel of all time.

So what makes it so iconic?

Comic history made it so. This was the first meeting of Mary Jane Watson and Peter Parker, but she would go on to become the love of his life. Those two characters would ultimately go on to have one of the most enduring romances in comics, right up until the ridiculous “One More Day” storyline and the deal with the devil that erased their relationship.

Mary Jane was unveiled to the world. The panel appears in Amazing Spider-Man #42, but Mary Jane had been mentioned several times before then. Readers had been teased about her existence for years, then this single panel gave MJ an entrance that has lasted for all time.

It was a wonderfully sweet moment. Sure, it was a wish fulfillment fantasy. I mean, what nerdy guy hasn’t dreamed of dating a supermodel. But something that could have been creepy had an ah shucks vibe to it. Just look at the confident MJ raise Peter’s eyebrows. If Peter Parker was a real person, you better bet he never would have forgotten that moment, even if the devil got involved.

It was a wonderfully sweet moment. Yeah, I know I listed this twice, but I think there is more to say about the panel and the time it appeared. MJ is an absolute knock-out, that much is certain. But there is nothing overly titillating about the panel. It is simply a girl with her jacket slung over her arm, ready for her date. While there have been later efforts to sexualize the panel, it has an enduring sweetness that I think we all can appreciate.

We don’t know what Stan Lee and John Romita Sr. were thinking. Peter was clearly smitten with Gwen Stacy during the time he first met MJ. Had Stan Lee always intended for MJ to become such a fixture in Peter’s life? In other words, was the plan from the beginning for Peter to hit the 2 billion dollar Powerball jackpot? We don’t know.

Peter kept blowing off this meeting. Again, MJ had been teased several times before readers first met her. Peter figured that since MJ was the niece of one of Aunt May’s friends, that he wouldn’t like her. And the more Aunt May pushed, the more Peter brushed her off. Well, his eyes communicate his shock when he finally met her. 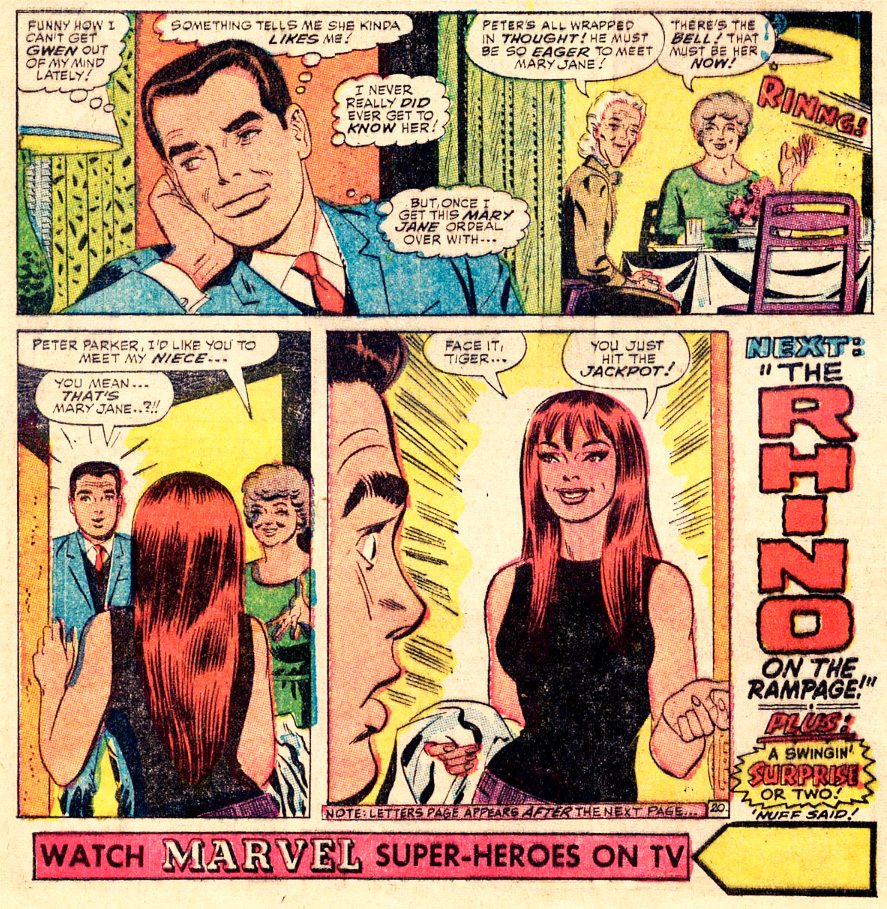 It’s a simple panel. There is no background to speak of, other than the lines that radiate out from Mary Jane, that are no doubt there to express her radiance. The simple yellow coloring further highlights her vibrant red hair that would go on to become one of her trademark physical features and make her so recognizable in comics.

And the panel only has two characters. First, a remarkable and self-confident young woman who would go on to become the great love of the world’s most popular superhero. Then there is a nerdy young scientist who is trying to balance great power and great responsibility, but in that single moment, he can’t believe his own eyes.