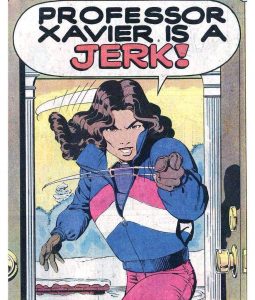 One of the most iconic panels in comic book history is the opening splash page of Uncanny X-Men #168 that shows Kitty Pryde bursting through a door, screaming the words, “Professor Xavier is a jerk!”

It’s a panel that has become iconic for several reasons:

The Real Reason Professor X is a Jerk

Xavier was eye-rollingly hypocritical. You don’t even have to search any further than Uncanny X-Men #168 for proof that Professor X could be a total jackwagon. Kitty Pryde had been a valuable member of the team when Professor Xavier suddenly demoted her, claiming it was in her best interest.

This was common for Professor X. One day he would say that he was making a decision that was in the best interest of his students and that he only wanted to keep them safe and then the very next day, he’d send the same student on a suicide mission against a Sentinel or whatever.

It was this ridiculous hypocrisy that was so befuddling about Xavier. No parent would ever question the instinct to keep a student safe. But let’s be honest, when it was in Xavier’s personal self-interest, he was more than happy to treat a young mutant like soldier.

He was also a total jackwagon to the ladies. Parenting young mutants is tough; let’s cut him some slack for being wildly inconsistent. But it’s hard to cut the man slack when it comes to the way he treated women.

In Xavier’s early years, he spent time in Israel. While there, he met a woman named Gabrielle Haller and they became romantic. When Xavier left Israel, he left Haller high and dry, despite the fact that she was pregnant with Xavier’s son, a child who would grow up to be the mutant Legion. Behavior like that will get you labeled something worse than a jerk.

He was absolutely cavalier when it came to mind control. But the real reason Professor X deserved the ‘jerk’ label was how he would routinely lecture other telepaths about the dangers of using their power to make others do what they wanted them to do. Yet Xavier routinely seemed fine with doing the exact same thing if it suited his purpose.

Imagine if someone had the ability to control your mind and take away your ability to think and act for yourself. Who would not label that as jerk behavior? I mean, really, imagine a world where there were individuals who could not only read your thoughts without your knowledge of it, but they could also direct your actions or even overwrite old memories, replacing them with new ones that were not your own. Well, let’s just say it would be difficult not to be paranoid.

Professor Xavier would routinely lecture about the ethics of using this type of mental power irresponsibly or in self-interest. But guess what? Professor X routinely practiced the behavior himself. Sure, it was often when he felt like no other options were available and it was often done when the stakes were high, but c’mon Xavier, you were supposed to be better than that.

Mindwriting is not cool, man. We’re talking about telepathically erasing other people’s memories and either replacing them with new ones or leaving a memory gap in the persons. Think of it like the comic book version of gaslighting.

One example had Xavier erase Cyclop’s memory of his brother Vulcan and altered his memories of the island Krakoa in order to hide his own poor judgment that resulted in Vulcan’s death. And this wasn’t the only time Xavier altered memories to cover up his failures.

Ethicist Andrew Terjesen is a good sport and comments on the overlay of fakey comic book stuff with real world consequences. Mindwriting is not morally permissible argues Terjesen, even if there are good short-term reasons for it. Says Terjesen, “Knowing there are people out there who can erase memory might result in mutantphobia or a complete breakdown of social bonds, due to lack of trust in your memory and in other people.” He continues, “Mindwriting takes something personal from us and limits our freedom of choice.”

Comic book telepaths like Professor X are wholly deserving of the jerk label. This simple comic book panel from Uncanny X-Men #168 *ahem* illustrates that. But they have given us fun stories to read and talk about, for which my childhood was thankful. What’s more, they can intersect real world issues like gaslighting, memory loss, controlling personalities, or even the phenomenon of how our minds can be suckers for #fakenews.

Sure, Professor Xavier wanted you to think he was a good guy. But take a look at the iconic panel of young Kitty Pryde and decide if you are going to believe Xavier or your own lyin’ eyes.

FX’s Legion: The Beginning Leaves Us with a Legion of Questions