Perhaps my favorite trope of the X-Men has been gifted students in a boarding school. Behold:

Tropes like mutants thought dead in the Australian Outback years, stopping threats before they fester like Remender’s X-Force run, or the more recent Cyclops as guerrilla revolutionist have been fine editorial directions for the X-men, but the halcyon years of the X-Men comics were those that revolved around the Xavier School for Gifted Youngsters, located in Westchester County, NY.

Xavier’s school was dedicated to helping young mutants fit in in a world that hated them, while also helping them learn to use their considerable powers. The mansion turned school was part of the inheritance of Charles Xavier, but he them outfitted it with some very superhero(y) stuff like a hidden Blackbird jet hanger, a Cerebro unit for telepathically locating mutants, and the famed Danger Room, the holographic training room of the X-men. 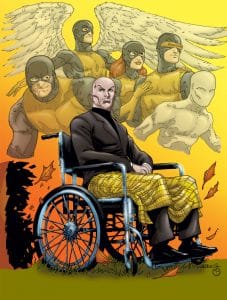 Then in the 80s, a whole new team of New Mutants were enrolled. What is interesting is that with each of these students, Charles Xavier assumed a sort of foster parent relationship with them. Cyclops, for example, the comics regularly and consistently touted Charles Xavier as his father figure.

But was Charles Xavier a good parent to these young mutants?

First, let’s check on of these mutant’s real parents. Professor Xavier was in the business of raising other people’s children for them, but we don’t blame those kids’ parents for sending them to the Xavier School for the Gifted.

On the contrary, we are pleased that these children’s parents recognized their own inability to offer their mutant children the guidance they needed as they learned to cope with and control their powers. We are understanding that the parents were willing to sacrifice a close parental relationship with the kids in order to give them the best opportunities available. What did they know about raising a mutant child, you know?

In the real world, parents who give their children to the state or a relative are often judged harshly for failing as parents. While there are surely less virtuous reasons for giving up one’s parental responsibilities–selfishness or laziness, to name just a couple–in some cases, placing one’s biological child into hands you know are more capable than your own can be the best and bravest thing a parent can do.

That’s a story as old as Moses and the bulrushes.

Unfortunately, it turned out that Professor Xavier showed he had horrible, terrible, no good parenting skills. Let’s look at the evidence:

Raising a mutant child is tough. We shouldn’t be hard on parents who don’t know what to do when their child shoots beams out of their eyes, blasts like a cannonball, or phases through walls. It’s understandable they sought help.

But what’s in question is if Charles Xavier was the right person to turn to for help.

What do you think of Professor X’s parenting skills?  Drop in on our Nerds on Earth-616 Facebook Group and take a side!

Being a Nerd Dad: How to Throw a Superhero Party