By Clave Jones On Mar 24, 2016 Last updated May 24, 2018
Share TwitterReddItPinterestFacebookEmailPrint

Why was Hugh Jackman–an Australian–hired to play Wolverine in the X-men movies? Well, it all started back in 1988. 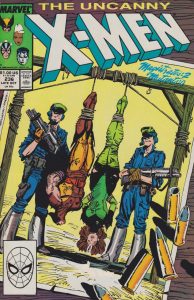 During the Fall of the Mutants crossover, the X-Men engaged a villain in a battle on LIVE television. It was the Kardashians, I think.

So the entire planet watched as the X-Men sacrificed their lives to stop the villain. But…after the cameras stopped rolling, the goddess Roma intervened and resurrected the X-Men, giving them a new start in a world that had seen them die!

Shortly thereafter, the X-Men fought the Reavers, and after whoopin’ them, it resulted in the Reavers’ headquarters in the Australian Outback becoming the X-Men’s new home base. From there the X-Men laid low for a little soul searching.

Chris Claremont had just began a brand new chapter with the X-Men and it was gall-darned brilliant.

The Australian era of Uncanny X-Men only lasted for a couple of years, but it marked both a shift in tone for the comics, as well as laying foundational pieces that carried the comic forward for years long after. The X-Men in Australia brought the Uncanny X-Men back to being the best comic book in the spinner racks. Claremont had found new inspiration and retuned to form, producing some of his greatest work. 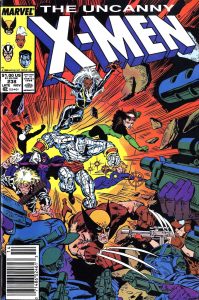 The X-Men in Australia were grounded and re-established. Gone for a couple years were the big, epic earth-shattering battles with gods and deities. Likewise, the Starjammers were taken off the table, making every thing happen on good ‘ole fashioned earth.

This isn’t to say the X-Men avoided fisticuffs. Far from it. But the Australian years saw the villains be more personal, and as a result, the X-Men became more introspective.

The art tone under Marc Silvestri reflected this as well. The Australian Outback brought a less cosmic feel to the book and replaced it with a more earthy vibe. Our heroes engaged in walkabouts, not galaxy-spanning jaunts.

Older villains, characters, and storylines were reinvigorated. But Claremont didn’t neglect past epics villains. The Brood, for example, made an appearance during this run. But this time they were a more dangerous opponent with higher stakes, as everything happened on earth, among settings that comic readers felt hit closer to home. Again, the stories were smaller, but they were more personal, both the the characters…and the readers.

The Australian years were BOLD. Claremont was writing the #1 comic on the newsstands, which would have made it easy for him to coast. What did he do instead? He stripped away everything that was comfortable, like the mansion and Cerebro, or characters like Kitty Pryde and Nightcrawler. Not many writers would have the courage to rip up their team and setting to start from scratch. 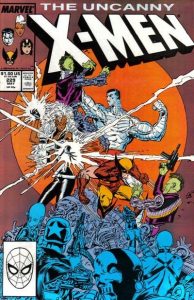 It re-awakened the social conscience of the X-Men. This Australian era introduced of Genosha, a small country that practiced a mutant version of Apartheid. X-Men had always been a book about civil rights but soaked in soap opera storylines. But the storylines from Genosha provided renewed vigor and seeded dozens of storylines for the entire mutant line of books for years to come (most notably the X-Tinction Agenda crossover).

It was responsible for amazing character growth. Characters like Dazzler, Longshot, Havok, and Psylocke weren’t at all fleshed out, but Claremont turned them into the main team. This brought new romances, new drama, new personality mixes, and renewed engagement in characters beyond how their powers worked in combat. Again, X-Men has always been a soap opera, but the Australian years turned it into something that Telenovela was jealous of.

The Australia era of Uncanny X-Men (Issues #229-245) was a shift in tone and attitude that lasted all the way until Claremont changed them yet again by passing them through the Siege Perilous (a story for another time).

Jim Lee then succeeded Marc Silvestri and reinvigorated the art once again. Then new characters like Gambit and Jubilee were added into the mix. But none of these things would have happened without the Australian era of Uncanny X-Men, a run that remains criminally underrated.

So that, my friends was why the Australian Hugh Jackman was cast as Wolverine. Australia and the X-Men are a perfect fit.

All issues are available on the Marvel Unlimited app.