If you pay attention to entertainment news, you may know that there has been talk twice of an Agents of Shield spin-off. It is an interesting idea because the Marvel universe is wide and provides lots of possibilities for it to happen and directions for the new show to go. But it also is a strange thing to hear when you look at the show’s ratings, which are very middle of the road.

All of this is relevant in regards to this week’s episode because they are clearly launching Bobbi and Hunter into their own series.

Last week’s episode had Hunter and Morse stowed away on a plane with Malick, which eventually goes to Siberia. This week’s episode opens with Morse and Hunter in separate interrogation rooms. The important thing is that they are accused of murdering two high ranking Russian leaders. 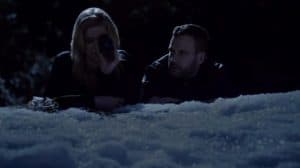 Over the course of the episode we get flashbacks that show us that Malick was attempting to lead a Russian coup, using some of the Russians and mainly a Russian general who happens to be an Inhuman. There are some shenanigans, especially when Daisy, May and Mack get on site as well. They attempt to save the prime minister of Russia but in doing so, they have an epic battle with the Inhuman, who has the power to present a dark antimatter body away from his own and they are having no success in defeating it.

This ends up with Bobbi doing the only thing that she can as the antimatter body fights Hunter: she runs down the general, uses a gun and kills him. She is immediately taken captive, as is Hunter.

Eventually, as the interrogation keeps going along, the two of them are put in a room together and they hatch a plan: they are going to have to leave SHIELD. Throughout the episode, there has been a sense of Hunter especially worrying that there agent life has been a distraction from their life together and, while it wasn’t subtle, it did the work of them having a reason and an acceptance for what comes next.

Coulson shows up and uses his hand to disable the interrogation room camera, starts talking over the plan and they stop him. They don’t want to be on the run with SHIELD, as they know they will become a distraction. So they concoct a plan that is all about them being disavowed agents, set free by the Russians.

Does it all work? Sorta. It isn’t a perfect set-up and while they have been doing some slow playing of this storyline over the course of this season, it was a workable set-up. 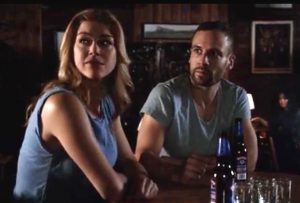 But they stuck the landing. Big time. The closing scene of the episode shows Bobbi and Hunter getting drinks in a bar. And the bartender brings over a drink. And then another. Bobbi sees Simmons across the room and eventually they see that the whole team is scattered around the bar.

It is what she calls a “Spy’s Goodbye”, which may or may not be a real thing. But they do a beautiful scene where each member of Shield raises a drink, toasts them and slowly walks away. And, man, it works.

No words. Just eye contact, love and respect shown and tears, by the audience and the characters.

I pay attention to twitter during the episodes live and it was overwhelming seeing people’s reaction. It will be one of the best 5 scenes in television this year. And because it is so good, it makes what could have an OK episode a great one. It is proof that if you stick the landing, you can get away with some wobbly decisions and moments in the course of an episode.

This week’s episode isn’t as great as the Simmons off planet episode earlier in the season but it is easily the second best of the year and one of the top 5 of the series, almost entirely off the power of this one scene and for the dynamics it sets up moving forward.