Adkins (Co-founder of Nerds on Earth and Power Ranger wannabe) Here at Nerds on Earth, we’ve chatted about our favorite real life nerds and written posts revealing the characters we had major crushes on growing up. Today for the weekly chat, we thought we’d combine the two and share which real life nerds we’ve got crushes on. With a word count ceiling of around 1000, we had to do some serious culling of the field! Who made your final cut, Jennifer?

Jennifer (Husk slayer) Well, I didn’t have to think too hard on this topic. My first major nerd crush is Jennifer Hale, the beautiful voice you hear in many cartoons and video games, my personal fave being Commander Shepard in Mass Effect.

Adkins Are you crushing on her based solely on her voice?

Jennifer Nah, she’s gorgeous as well. But her voice….yeeeeeahhhh

Adkins When did you first encounter her?

Nash (Crushes on Chrises) She’s got quite the resume, looking her up now. 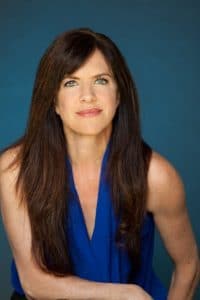 Jennifer Really wanting to know her voice and falling in love with it? Mass Effect. The first game. And all the games. I play Female Shepard just for her voice.

Adkins So was it love at first listen for you?

Jennifer Oh yeah. And then I saw her resume and realized that I had been hearing her voice(s) for years. So I fell even harder.

Adkins Okay, cool. That dovetails nicely into my next question for you! Mass Effect dropped in 2007. Was there someone you were crushing on when you were younger? Say during your grade school years? Maybe Hale did something you appreciated back then, too?

Jennifer She’s gorgeous and can fight and is a strong female. My kinda gal.

Adkins Did Jennifer touch on one of your early crushes with O’Connor, Nash?

Nash I didn’t even expect to go old school, O’Conner is up there.

Nash I wrote about my first ever crush, Marina Sirtis.  She is and will always be top because she was my first.  Lucy Lawless too though…the show was way ahead of its time as far as strong female lead characters…

Which actually brings me to my top current crush, Hayley Atwell.

I have a thing for brunettes for sure.

Jennifer Haha. No shame in that.

Adkins What draws you to Atwell?

Not that there’s nothing to be drawn to!

Well aside from the obvious, she is gorgeous, she is a great actress and I absolutely love Peggy Carter. Not as much as Jenn and Jason perhaps, but still…

Time for you to hit us with your crush Adkins.

Among my first was Amy Jo Johnson. That name ring a bell for either of you? (No cheating with Google!)

Nash It hit me as I was typing then I read Jenn’s post.

Adkins Jennifer nailed it. I was ​big​ into The Power Rangers as a kid. As if I didn’t ​already want to be the Green/White Ranger, the fact that Tommy had Amy Jo Johnson’s affections made me want it all the more.

Nash Power rangers was a little after my time – or should i say was really popular when i was pretending to not be a nerd.

My cousin watched it though so I would watch with him.

Going back to sexiest voices in Nerdom I love the voice of Veronica from age of ultron – Kerry Condon.

The voice of Ironman’s suit in Age of Ultron.

After Jarvis was destroyed by Ultron.

Adkins In high school I fell in love with Olivia Munn when Attack of the Show! aired. And now she’s 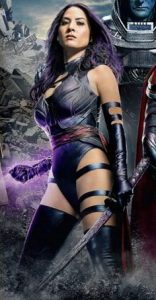 playing Psylocke in the newest X-Men movie, so that’s like double-crush.

Nash She seems sweet, saw an interview with her.

Nash She has a sword room!

Nash Because of her training for Psylocke, she is now addicted to swords.  I’ll put in a good word for you if I ever meet her Adkins.

Adkins Speaking of meeting folks (and attempting to unbury Ruffin’s crush on Felicia Day) – I met her once.

Jennifer I got her picture at DragonCon. But didn’t have time for a chat.

Adkins Funny story. Kevin paid $30 or so to have his picture taken with her at Dragon Con a few years ago. When you do that, you’re with that celebrity for, like, seven seconds. The same day he took his photo with her, I bumped into her and her entourage walking around in one of the hotels. Took dozens of pictures.

Met Adam Savage that same day on an escalator.

Jennifer Gah. I wanna chat with her. She’s so cool and nerdy. Her book is great.

Okay guys, I have hot women I am crushing on. Any men you have crushes on? The world wants to know.

Nash We don’t have enough words left for my man crushes.

Jennifer Haha. All the Chris’s in the world! Yasssss

Adkins I’ve long been a Ryan Reynolds man myself and I’ve no shame in admitting that.

Jennifer Niiiiice. I love me some Ryan.

Even his Deadpool self?

Adkins Maybe ​especially his Deadpool self. When he was originally cast in Origins and then AGAIN for the solo flick, I literally couldn’t have been happier.

Nash Perfect Deadpool, glad he was able to redeem his character!

Jennifer Same. He was wonderful! And smexy in his costume.

Adkins  We better close this chat down before we reveal any more material from our diaries, you two…