In round one, Thor defeated Storm and Doctor Strange incapacitated the Hulk. Who wins it between these two headliners in round two?

The Eye of Agamatto flashes brilliantly, blindingly. Strange was on his heels. Thor was fast and relentless. Stephen was only barely managing to flick through his gestures and speak aloud his incantations before Mjolnir attempted to make a stake of his head. As Thor tried to blink away the spots that plagued his vision, Strange began channeling.

“You are a god, yes, but you are neither the only nor the strongest, Odinson. I am as strong as the god I invoke…or gods.”

Drawing strength from his patrons, Strange’s spells take on a new efficacy. His seraphim shields turn Mjolnir aside. His bolts spin the god of Thunder ’round like a top. The advantage is his.

But Thor has reserves. He’s long since learned to withhold his true strength when facing foes from Midgard. So few of them can stand the full might of Thor, yet he finds himself driven and parried by this, a mortal. The halls of Valhalla will echo with laughter eternal should I fall to such as he. I’d much rather they heckled me for using mine full strength against a mere mortal than face the jeers of being bested by one. 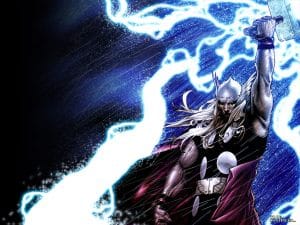 Thor raised Mjolnir above his head and though not a cloud populated the sky overhead, a lightning bolt the likes of which Strange had never seen parted the heavens and alighted upon the raised weapon. The very air seemed charged and the god of Thunder practically crackled with newly imbued energy. He grinned a toothy grin.

The hairs on the back of Strange’s neck bristled and stood erect – the cause of which had nothing to do with electricity.

Stephen was taken aback by Thor’s new efforts. He’d thought for sure he gained the upper hand.  Mjolnir seemed no more than a tack hammer; Thor no more than a rag doll. Now the hammer easily deflected his projectiles and its blow caused fissures of light to break out along his shields like spiderwebbing. It would be beautiful if it weren’t so frightening. His thoughts raced, his hands flew, his words flowed, and yet Thor fell upon him with a ferocity unmatched.

Strange’s shields shattered – pieces of its etherial light flying through the air like so many shards of glass before effervescing into nothing. He lay upon the ground unconscious.

Thor approached warily, halted, then brought Mjolnir to ready. “I’m kin to Loki, the Trickster god.  Sorcerer Supreme you may be, but you don’t possesses half of Loki’s skill with illusion, Strange.”

And with that he spun, bringing the hammer around in a backhanded sweep with such speed that Strange was barely able to conjure up a shield in time. The force of the blow sent him soaring through the air. He slid and rolled twice over before coming to a halt. He rose, but slowly.

He cut a picture then far from his norm. His usual dapper appearance now marred with the evidences of this battle. Most notable were the crease in his brow and the whites of eyes. It was not only a fear of Thor that drew forth these features upon his visage, but also a fear of what length he must go to, which resort his must now rely upon, to fell the Asgardian.

The artifacts and principalities have proven little better than useless.  I’m merely buying time when I needs be neutralizing this threat…I’ve only one recourse, though I disdain the thought of it. May I be granted pardon for what I must employ against this god of Thunder. I’ve drained Asgardian magics before.  I pray this works equally as well and twice as quickly.

“In the name of the omnipotent Oshtur,” he bellowed, “I draw your power unto myself!”

Thor feels the effects immediately. As the black magic works upon him, he falters…yet spies an opening. His only remaining hope. His strength comes from without. His flesh and bones are naught but human. 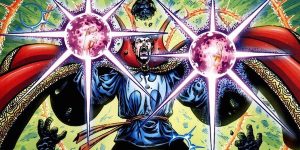 Strange’s eyes are sealed tight with strain. The power is overwhelming. He knows there’s a ceiling to the amount he can safely siphon from his adversary and it rapidly approaches. As the exorcism continues, seconds stretch on for centuries. Surely this will incapacitate the god.

Suddenly he feels calloused hands upon his wrists! His concentration is broken and his eyes dart open to be met with those of the mighty Thor – bloodshot, angry. Thor breathes heavily. He’s clearly exhausted, but not so much so that he cannot easily crush several bones in Strange’s hands in a viselike grip.

The pain is excruciating, and as Strange begins a scream it is quickly cut short and reduced to a gurgle with a coup de grâce – a two-fingered jab to the throat from Thor.

“Thy hands are crushed. Thy throat is closed. You’ve no more means of magic, sorcerer. You will recover in time, but know this: Though you call upon gods, you are no god. Though you invoked the names of many gods this night, only one triumphed and you would do well to remember it.”

Commanding fully 2/3rds of the reader Facebook voting poll (though not mine!), Thor leaves Strange nursing two crippled hands and bruised and swollen throat and advances to the Marvel bracket’s final against the Canucklehead – Wolverine.