We love Jason Aaron’s work with Thor here on Nerds on Earth, and I’d put his God Butcher arc up against any other Thor story.

The God Butcher is epic in scale; one of the Thors (time travel, amirite?) even goes so far as to say that the goings-on of this arc are even more significant and impacting than Ragnarok itself:

This is no mere Ragnarok come upon us, boy. This is an ending beyond all known endings.  This is apocalypse unparalleled.

So what exactly is going on here that pales in comparison to the death of most of the Norse gods and the destruction and subsequent renewal of Asgard and Midgard (Earth)?

Answer: The death of all the gods.

The origin of Gorr, the God Butcher

Before he became “The God Butcher,” Gorr was a young boy wrestling with the Problem of Evil. His parents had raised him to believe in the existence of gods who could be prayed to and expected to act on his behalf. Unfortunately, his experience of the gods did not validate those claims.

His family is starving. His mom is killed by wild beasts before his eyes. And Gorr’s situation doesn’t improve as an adult: still his family starves and moments after his mate tells him that the gods will provide as they always have, she is killed in a rockslide…while bearing his unborn child. 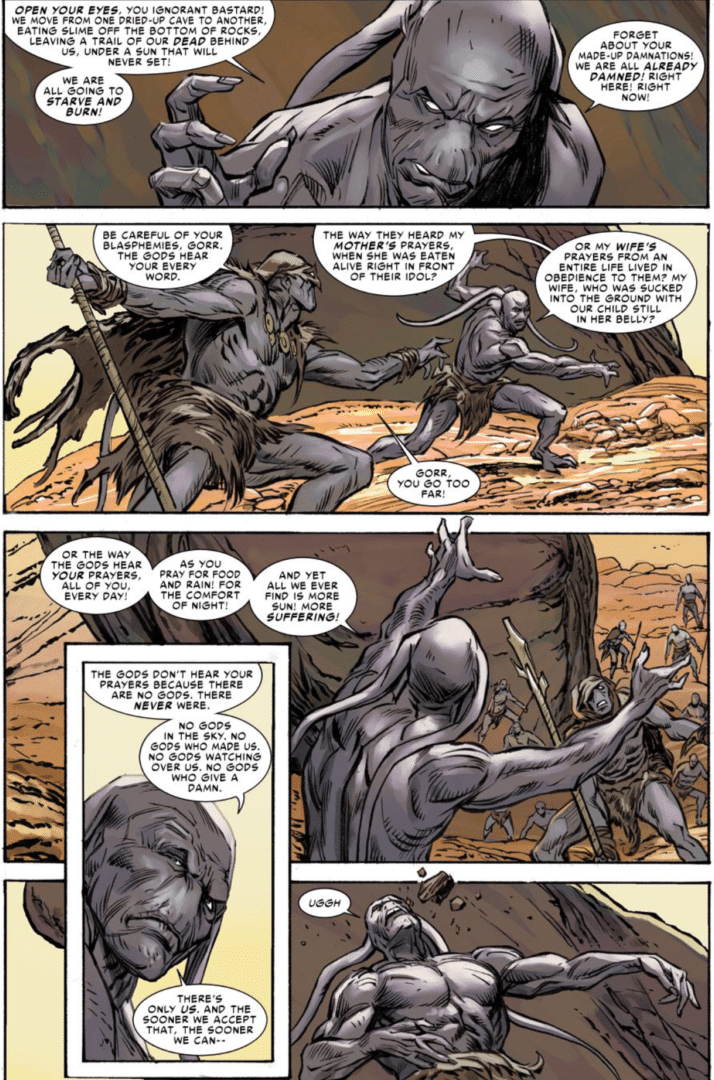 The Evolution of Gorr’s Theology

Gorr’s story begins with him as a polytheist, but his experience transitions him to an expression of atheism. But that doesn’t last long. The same day he makes the exclamation shown above about the lack of gods…he meets two of them.

Proof of the existence of gods only exacerbates things for Gorr. It used to be that he believed they just weren’t there. Now he knows they were…but they did nothing to answer the prayers of his people.

He’s understandably upset by this revelation, acquires a weapon capable of killing even the gods from one of them, butchers them both, and sets out to do the same across the cosmos.

The Formation of Gorr’s Philosophy

So now Gorr knows there are gods, but he doesn’t believe that they are what is best for the creatures that believe in them. He believes their experience of life would be qualitatively better without the gods; without the fear of eternal damnation, lust for eternal rewards, the hope of blessings never received, and dependence upon gods who care only for themselves.

Gorr sees believers as expecting functions from their gods that the gods just aren’t delivering on. He sees futility in that, and he now has the ability to provide a remedy. He’s going to kill all the gods; freeing all creatures from the “yoke of divine servitude” so that they can live this life without worrying about the next and come to rely upon each other rather than the gods who never deliver.

So he struggles with a sort of action economy: Why pour effort into the reliance upon gods (Why pray? Why serve? Why be obedient? Why worship?) when they’re unreliable and even uncaring?

Or even worse, as Gorr goes on to explain: 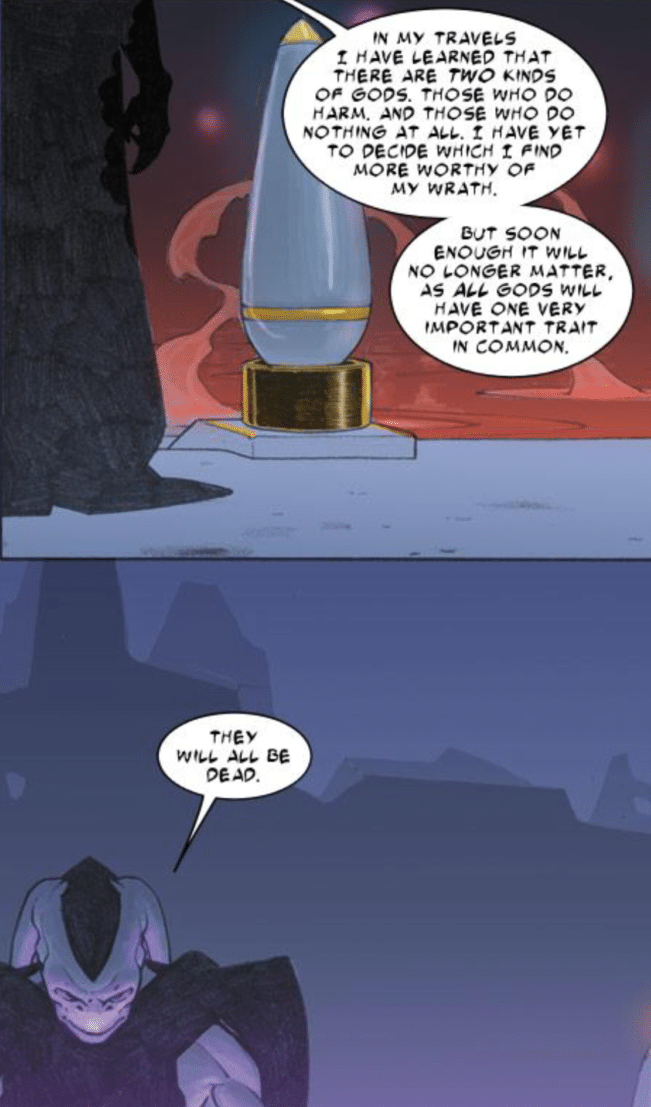 I think this is Gorr’s strongest beef with the gods – That they can do something but, for whatever reason, don’t. I’ve written on this before. But the answer to this problem is not “kill all gods,” and it’s not the leg upon which he stands as the reason behind his spree. Gorr supposedly fights primarily for the freedom of the people, not because of the inactivity of the gods – though that is foundational to his campaign.

But his position has a few problems. And to be fair: We are talking about a madman here, so reason probably doesn’t matter all the much to the guy!

The Problems With Gorr’s Position

I’ll grant Gorr this much: The gods of his particular corner of the cosmos, the ones who did nothing in response to the obedience and prayers of the people of his planet, they could well deserve his wrath.  But he projects the failure of his gods onto all other gods – a huge, huge leap in logic.

At the very least, he should have gone planet to planet polling the audience: How have your gods served you, if at all? Do they listen to and respond to your prayers? Have you seen them?

But let’s take a step back: Is Gorr also projecting purpose onto many or all of the gods?

Gorr’s anger is built on a foundation where he assumes the gods are completely responsible for…well, everything. They’re supposed to answer prayers, protect “their” people, bless, provide, etc. But what if that is a faulty assumption? 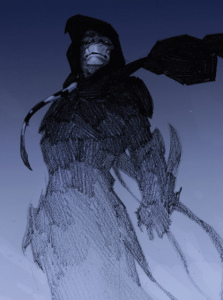 In the Marvel Universe, there are gods of all kinds of things:  thunder, mischief, bombs, etc. But its also clear that those functions are fulfilled apart from the influence of the gods of those things; i.e. Thor is not responsible for every thunderstorm.

In other words, these gods have lives apart from their function.  Thank Borr, too, because I’m not sure I could read a comic wherein a guy just travels around stirring up storms.

So if they aren’t even beholden to have a hand in the very things they are the gods of, how could they possibly be held accountable for stuff they’re not the gods of? Why kill the god of bombs (an actual example from the series) because your family – or any/all families across all the universes – dies of starvation?

There are also gods who aren’t explicitly stated to be the god of anything particular; they’re just gods/celestials just like you and I are human or dogs are dogs. It is their mode of existence, not necessarily their means for it.

Building from #2: The gods might not be in any kind of covenant with those that believe in them. Sure, if a pantheon has a covenant relationship with a people and they fail to uphold their end of the bargain (with the people’s end being things like worship, obedience, prayer, sacrifice, etc), then there’s a problem worth addressing. Though I  don’t believe that death is the appropriate measure in that situation unless death was listed as the punishment for failure in the covenant itself.

And I also don’t think a covenantal relationship is inherent to godhood. Not all views of the relationship between a god or gods and their worshippers involves a promise of any kind.

And even if some of them did have covenantal relationships with those that believe in them, it is still bad form to treat all gods as if they’ve violated a covenant that might not exist between them and a people.

Of course in his murdering spree that spans centuries, Gorr himself becomes a god who fulfills none of the very functions he saw the gods failing at in the first place. He chases his own selfish pursuits–just as he accused the rest of the gods!

He becomes what he hates, and there is a poetic moment where his “son” recognizes this in him–even going so far as to call Gorr the “god of hypocrisy.” And I place son in quotations marks because he turns out to be a construct of Gorr as opposed to his actual, biological offspring.

So in the end, some part of Gorr grasped his own failure and its irony. 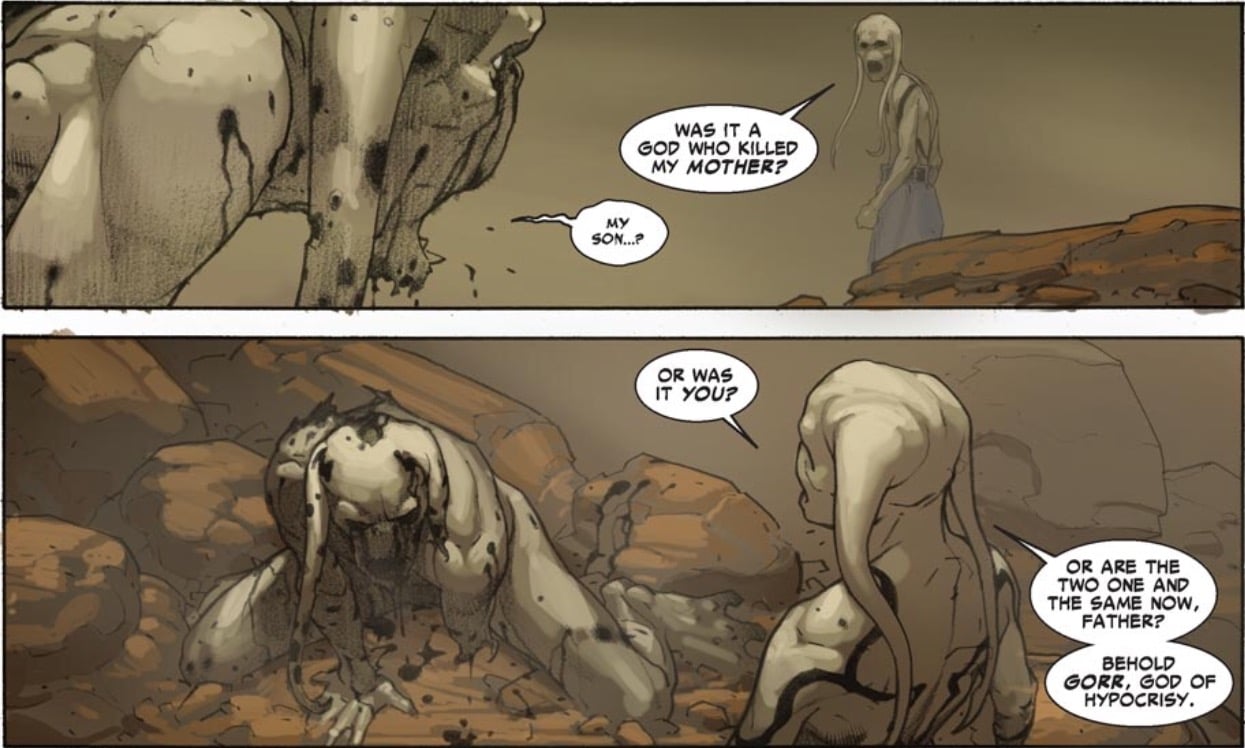 So as it turns out: Being a god is hard (Who knew?!), but Thor resolves to be a better one come the end of this arc.

The God Butcher spans issues #1-#11 of Thor: God of Thunder from 2012 and is amazing, even apart from all of the theology and philosophy. It is 100% well worth the read (especially since it provides some context to the ongoing Unworthy Thor series) and is available in its entirety on the Marvel Unlimited app.  It is an amazing story with absolutely gorgeous art throughout.

It it stellar (see what I did there?).