Don’t know where to go in your area for comics?  Use this here Comic Shop Locator! And when you get there, tell them Nerds on Earth sent you. They won’t know who we are, but still…

Serenity: No Power in the ‘Verse #1 by Chris Roberson, Georges Jeanty, and Karl 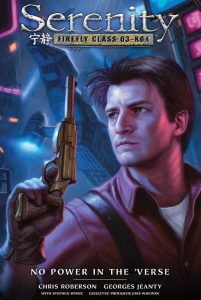 Introduction to the Comic  Mal, Zoe, and Jayne pull off a heist and return to Serenity with the goods.  Even though they get away clean with the goods, Jayne is hesitant to call it a successful operation…mostly because “the goods” in this case was toilet paper.

Mal slinks off to be with Inara and is almost as disappointed with the haul as Jayne is, but “everybody’s got to wipe, and there’s many who’ll pay for the privilege.”  Even with that sentiment, he knows that these small time jobs aren’t enough to keep food on the table and his boat in the sky.

Inara begins to explain to Mal why she left Sihnon (something he’s/we’ve never heard), but they’re interrupted by a ruckus – Zoe furious with Jayne because he left the hatch open and now Emma (Zoe’s daughter) is missing.  They spot her quickly enough, but before they can reach her she falls off the balcony only to be rescued by River at the last second.

Jayne does his best to apologize, but Zoe crushes him by saying he doesn’t have any friends. 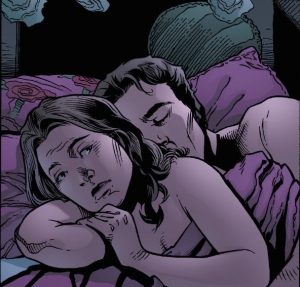 food they’ve got to work with and how you’ve just got to make due with the materials on hand.  Kaylee spins that comment into Simon simply “making do” with her, too.  He assures her not, but you can still see the sting and doubt in Kaylee’s face afterwards.

The crew gets a comm from Iris, a former captive of the Alliance as River had been whom they rescued.  Their friend Bea has gone missing.  Turns out she was arrested under suspicion of working with a group called The Peacemakers, who Zoe and Mal explain are a group of Browncoats turned terrorists.

They follow their only lead to a halfway house.  Once there, they are held at gunpoint while the lady in charge begins drilling them about what they know while holding the threat of death over their heads.

Why Should You Care?  If you’re a Firefly fan, literally any of the comics that take place in that ‘verse are pure gold.  All of the charm and quirk of the show are here from the swearing in Chinese to the odd crew dynamics and the characteristic vocal mannerisms.  The brand sells itself to the initiated.

But what about the rest of you?  What if you haven’t seen every episode of Firefly dozens of times, don’t watch Serenity every week, or couldn’t possibly recite the lyrics to the theme song or “Hero of Canton, The Ballad of Jayne Cobb?”

Well, what you’ll get is a western feel in a space setting.  There’s just enough here to prove interesting on its own, in my opinion.  It doesn’t exactly wow in a vacuum, but I promise you this:  If you stick around, you will be pleasantly surprised.

Alternatively you could wait for the trade and spend the interim time catching up on Firefly.  In fact, let’s call that Plan A.

Batman Beyond (Rebirth) #1 by Dan Jurgens and Bernard Chang

Introduction to the Comic  We open to a scene of someone called Terminal explaining to a frightened captive that The Joker is Gotham’s most influential citizen ever – and convincingly so.  Who else “inspired a legion of followers?  Who does everyone really want to be?” 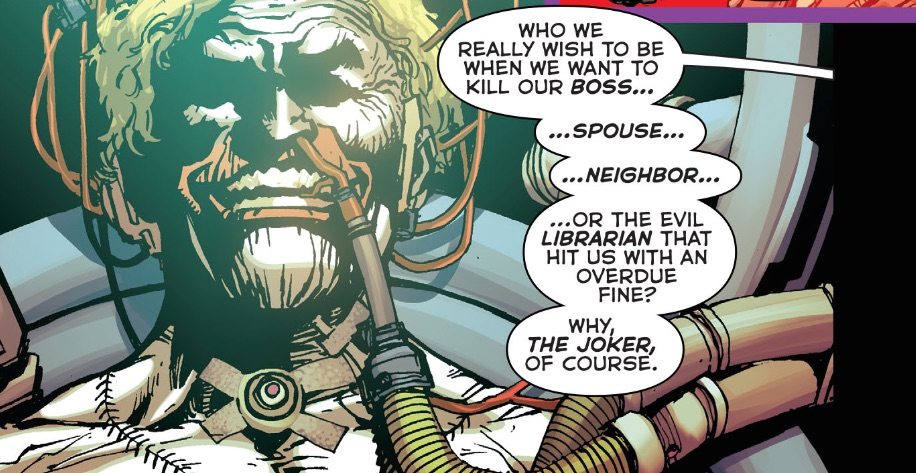 And Terminal concludes his argument with a haunting statement:  “What better joke could be played on Gotham than reviving The Joker?”

We cut to Terry Mcginnis’s (that’s the Batman of the comic’s setting) little brother Matt escorting a blindfolded friend, Max, into the bat cave.  He pulls up Terry’s suit’s sensors and recognizes that he’s in trouble.

Terry is lying beneath a building’s worth of rubble while the Jokerz gang member who put him there prepares to finish the Bat once and for all.  Mcginnis drops a small but potent charge down a pipe to blow himself out of the debris and back into the fight with the Jokerz. 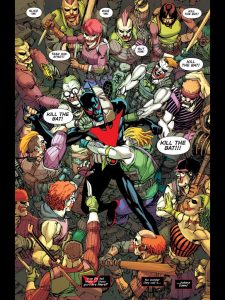 The big one who buried him initially is running off of venom (like Bane) which he eventually disables, but the fight is far from over.  He’s surrounded by clown-faced killers chanting “Kill the Bat!” and they swarm him with knives, crowbars, planks, bats, chains, and guns.

He’s outmatched and outnumbered, so he’s takes flight – leaving Jokerz Town and its delinquent inhabitants behind.  Back at the bat cave, he’s resigned; talking about how “this is one time Batman can’t do the job” (He even says it is “beyond Batman.”  See what they did there?).

The issue closes with Mcginnis in face paint and purple and green armor dropping the “If you can’t beat ’em, join ’em” cliche on us.

Why Should You Care?  I personally love the Batman Beyond setting and characters, so this was a no-brainer trial for me.  Looking past all that I already enjoy about the title, this #1 issue picks up in media res. The proverbial frying pan is nowhere to be seen…there’s just the fire. 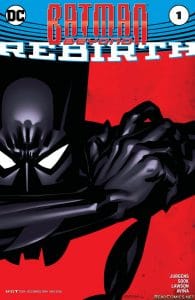 The Joker has amassed a huge cult following (Mcginnis uses the words “couple thousand” to ballpark their number), they’ve taken over an entire segment of Gotham, and there appears to be a plot to revive the deceased Joker.  Throw on top of that pages of Batman getting absolutely throttled and finish the issue off with him in Jokerz garb and you’ve got my attention.

Oh, and Bruce Wayne, the original Batman (duh) and Mcginnis’s mentor, is dead so Mcginnis is very much on his own.

There are big problems in Gotham.  Can Terry manage Gotham’s Jokerz problem?  Will his infiltration tactic work?  Will The Joker rise again?