When it comes to the box office and television, Marvel properties are clearly outperforming DC when it comes to content quantity and quality.  But when it comes to video games I think DC has the edge, and that edge comes almost exclusively from the Batman Arkham series of games from Rocksteady Studios (Asylum, City, Knight) and Games Montreal (Origins).  They’re so stinkin’ good!

The folks at Rocksteady whipped up an amazing formula in Asylum that all of the subsequent games have more or less stuck to: a balanced mix of stealth and frontal assault.  Though a few additional mechanics have been added over the years, the foundation has remained largely unchanged and rightly so.  I’m a fan of the “If it ain’t broke don’t fix it” mantra, however I must admit that I’ve walked away from the series after Origins (2013) because while what’s great about the games hasn’t changed, neither has much else.  Origins felt like City with a new skin, and Knight appears to follow the pattern as well.

So how could the developers break free from the monotony while simultaneously remaining faithful to the game’s heartbeat?

Fast forward to 2039 and bring us Terry McGinnis.

Taking on the game from the Batman Beyond material would present several opportunities for variation while also delivering on what we love most and (added bonus!) not deviating from continuity whatsoever.  Here’s how!

The Visuals and Mechanics

There is a lot of potential here!  Beyond is set in Neo Gotham, whose futuristic cityscape would be a welcome environmental change from the Burton-esque Gotham of the most recent games.  You could even opt for a more cartoonish look overall; deviating even further by relinquishing some of the realism.  That would bring with it more color and smoother lines too. 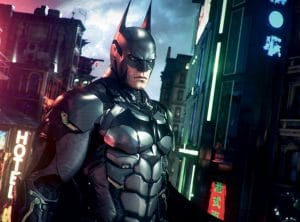 The reduction of lines and angles – especially on Batman himself – would play really well with what I envision to be the changes to combat mechanics.  The current iterations of the batsuit involve all kinds of plating and muscle accents, but McGinnis’ suit is form fitting without sacrificing any defense.  It boosts strength ten fold and doesn’t impede dexterity one bit.  So I think you could keep the heart of the current combat system but speed it up.

When controlling Bruce Wayne’s Batman, you feel the power.  With McGinnis I think you play up the speed.  Bruce already fights with a high degree of fluidity, but you could do away with the Zac Snyder slow-mo and opt for a quicker hit delivery to make it feel even more so.  A reduction in hard lines on the character would accentuate the fluidity even further! 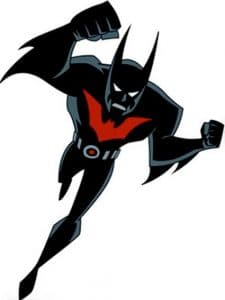 Plus McGinnis’ suit contains all kinds of upgrades that would add elements to the gameplay itself.  For instance, Bruce Wayne subscribes to the Buzz Lightyear school of flight – Falling with style.  McGinnis has small jets built into his boots allowing for vertical movement and increased horizontal speed.  Instead of doing a glide takedown you could execute a rocket propelled spear that would put Goldberg to shame.  I think it could make for a pretty cool interrogation tool, as well.  You pick your target, fly in, snatch him up, and take him to a safe location (a remote rooftop, say) for some questioning while leaving his goon buddies behind quaking in their boots.

The suit also has a cloaking ability (think along the lines of active camouflage in the Halo games) that would deepen the stealth gameplay a bit as well, which I think you have to retain in any Batman game.  The guy wears black after all; he’s not parading around for all to see in reds and blues like some people.  He relies heavily on recon and intel and he can perform those tasks with greater proficiency from that shadows.

By 2039, Bruce Wayne has long since retired the cowl (approximately 20 years), but he stays in the picture when he takes McGinnis on as a protégé.  The sensory array in the new batsuit allows Wayne to monitor all audio and visual input.  In game, Wayne could be to McGinnis what Navi was to Link…only less annoying and a lot more crotchety.  And the best part:  Absolutely no retconning or rebooting necessary! 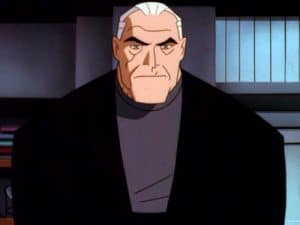 The World’s Greatest Detective very much remains a part of the experience.  Wayne could alert of dangers, perform research, connect investigative dots, and otherwise guide you from afar (as he did in the show) throughout the game.  And depending on the degree to which Wayne feels like an essential gameplay mechanic, you could potentially create room for a plot twist that not only affects the story but the gameplay itself:  Wayne is kidnapped and you, as McGinnis, are left to fly solo.  That could translate into unguided puzzles and a lack of cues for impending attacks (thereby crippling – but not eliminating – your ability to time counters well enough to offset them).

McGinnis can fight, but he doesn’t have near the training Bruce had so that would make some sense.

Oh, and the Wayne/McGinnis dynamic (student to teacher) creates an organic tutorial.  It would be like receiving OTJ training and wouldn’t require a single text box.  And this is not to even mention a greater (or at least newer) set of big bads.  And that you’d keep Kevin Conroy in the picture!

Don’t get me wrong:  The Arkham series is amazing!  I am so far from badmouthing it whatsoever.  To the contrary!  I simply don’t want just another skin; what I’m asking for is much, much more.  McGinnis and Wayne ought to play vastly differently and that’s a good thing!  Heck, you can take every idea contained herein for free so long as I get a game that honors the Arkham formula while significantly altering the experience which, if you can’t tell, I think it totally doable.

Bring me McGinnis and take my money!

Weekly Nerd Chat: Fantasy Book Series of Note (You May Have Missed)