I was watching the Firefly: Train Job episode for, oh, I don’t know, the 6,542nd time the other day, and I was reminded how many fun little touches the show has. Specifically, I’m talking about how Wash landed a ship on a moving train.

OK, technically Wash landed a Jayne onto a moving train.

I’m assuming that like every other sane individual, you seen the “Train Job” episode of Firefly, but here is a link where you can get the recap if you want. For now, I’ll simply discuss the key events of the scene under discussion, assuming you can play along as we have a little fun talking about the physics of landing a spaceship on a moving train.

In order to pull off the train robbery, Wash, the pilot of the Serenity, needed to perform piloting maneuvers that consisted of 4 stages: 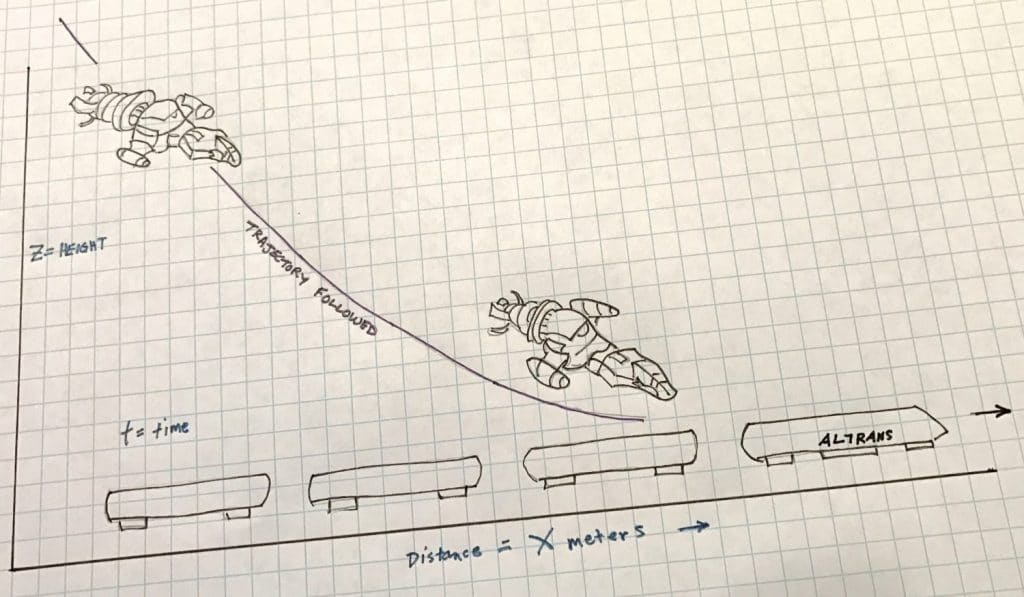 1. Detecting the target. I’m sure the Serenity had sophisticated instruments that the television show wisely didn’t bother illustrating. Plus, Mal and Zoe were already planted aboard, posing as passengers, so maybe they had a tracker on them.

We don’t know, but the simplest solution was that Wash simply used his eyeballs: “Oh, look, there’s the train.”

2. Track the target. Once Wash detected the train, he needed to track it as he prepared his descent and approach. This was an area where the show gave us a short clip of the Serenity flying well behind and above the train. But Wash was clearly tracking it, plotting an approach that timed perfectly with the heist that Mal and Zoe were plotting while aboard the train.

3. Trajectory planning. When it came time to lower Jayne onto the train with a cable, Wash planned his approach and the trajectory he’d take. Remember, he was flying toward a moving target. There was nothing easy about this. At this point, it’s helpful to visualize three dimensional space:

4. Motion Planning. Wash hit the correct trajectory in order to hover over the top of the train. The next step was for Jayne to be lowered into the train via a cable. Oh, by the way, the train is still moving!

Not only was Wash matching the speed of the train with exactness, but the Serenity also needed to be extremely stable as Jayne was lowered down, meaning zero roll, steady pitch and yaw, and zero slip in the northing and easting directions.

Needless to say, this is incredibly difficult to do and proves–once again and definitively–that Wash is a leaf in the wind.

Real life aerial vehicles–particularly ones with vertical takeoff and landing capabilities (VTOL) like the Harrier Jump Jet, and helicopters, which are highly maneuverable and can perform agile maneuvers–are known to land on moving objects, most notably, aircraft carriers.

Taking off and landing from a moving platform like a ship deck affords greater flexibility in regards to Special Forces missions or search and rescue missions like something the Coast Guard would undertake. But I think we can all agree that a train presents a tinier target. And while really small military drones have been known to land on a convoy of enemy trucks, I think we can agree that the Serenity, as a much larger ship, has different challenges when swooping down at a moving train.

But rather than go on and on about it, let’s just go with it and declare this myth as plausible, then get on with nerding out about how fun Firefly was. And although it is super important we get this right because you never know when we’ll need an Amazon drone to deliver our pizza to our self-driving cars or whatever, let’s just have some fun here. Because all our fuzzy math proved was that, beyond a shadow of a doubt, Wash was indeed a leaf in the wind.

What was the inspiration for Joss Whedon’s Firefly?