Though we live in a world with ever expanding possibilities for new shows, movies, and entertainment, sometimes you have to just go back and revisit the classics. As the Winter Olympics are airing, a lot of networks move to stunt scheduling or repeats, which means if sports isn’t your thing, February could be a time and place where you and yours are looking for something to watch, to binge on and make it through this last cold winter month. And here at Nerds on Earth, we have a solution for you: welcome to Firefly February. 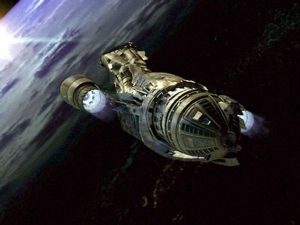 We have written about Firefly and the accompanying movie Serenity a lot here at the site, and for good reason: We believe that Joss Whedon’s too quickly canceled show was glorious. With a great premise, a diverse cast, and a compelling story, Firefly came out in 2002 and was nearly immediately doomed to failure and cancellation by the Fox network. Whedon and fans never game up hope and they rallied to get the film Serenity made to complete the story in 2005.

The story has since been continued and revisited in comics and other places and even this month, novels were announced that have Whedon’s approval and involvement. So as you are looking for some entertainment this month, Firefly could be the show for you to watch for the first time or revisit for the 100th. Here are some reasons:

Chinese Space Western. I mean, c’mon. Who doesn’t like cowboys with a spaceship that curse in Mandarin while wearing long brown dusters? In all seriousness, the unique setting of Firefly is phenomenal. The Earth was used up, they sought to form new Earths and in the process, civilization moved ahead. It is a strange mix where space travel is advanced but they are still using weapons that match ours today for the most part. For some people, it would be off putting but I find it is a nice mix. I mean, just check in with the list of quotes we love from the show! 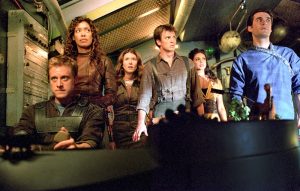 The cast. Seriously. Meant to be a smaller cast, Whedon kept liking actors in the casting process and wrote roles for them. So nowadays we can look back and see a younger Nathan Fillion, Gina Torres and Alan Tudyk but the work they managed to pull off with 9 regulars, who each were unique, developing characters is really quite amazing.

There are some seriously great episodes of television. EarthNerd Adkins wrote with passion about the great episode War Stories, and we’ve written about The Train Job as well. Personally, I fancy the episode Out of Gas. And even holding those two in such high regard, I could argue for some more excellent ones. The one that doesn’t get enough credit? The pilot episode entitled Serenity. Having just rewatched it, it is amazing how well that double length episode sets up the cast, the crew, the circumstances of the world. How in the world did anyone in Fox not realize the massive mistake they were making by airing the episode The Train Job first? Lunacy.

The passion of the cast and crew. I challenge you to find a cast and crew who cared more about their show than the group making Firefly did. Every interview you read, every time a reboot gets mentioned, you see them think back on the show with nostalgia. They knew that they were doing something special, unique, and damn near impossible. It is sad that they didn’t get to see it all the way to the end, but it is great to go back and experience the greatness of Firefly and Serenity now.

So, remember the Firefly February as you load up your discs or tune in for free on Hulu.

You can’t stop the signal.

Step Up Your DMing with These Podcasts