Did you ever read the works of Shan Yu? Fancied himself quite the warrior-poet. Wrote volumes on war, torture… the limits of human endurance. He said, live with a man 40 years, share his house, his meals, speak on every subject. Then tie him up and hold him over the volcano’s edge, and on that day you will finally meet the man.

In the previous episode “Ariel,” the crew manages to make off with a pretty significant amount of fancy meds. They’ve found a buyer, and Mal has commanded Zoe to ready herself to make the drop. In the background, Kaylee and River play “keep away” with an apple. Kaylee emerges victorious and exclaims, “No power in the verse can stop me;” a line that returns later on in this episode in an ominous way!

Zoe lets Wash know Mal’s plan, and this leads to a heated argument. Wash feels like Zoe asks “How high?” every time Mal yells “Jump,” and it is putting a mighty strain on their marriage. And instead of a “happily ever after” marriage (which is a damaging fantasy Disney peddles, IMO), we see some tangible, relatable marital strife:

Zoe: Right, because what this marriage needs is one more shouting match.

Wash: No, what this marriage needs is one less husband.

We’re then audience to the arrival of one of Inara’s clients. A councilor is due upon Serenity, and Mal won’t let anyone aboard his boat without meeting them.  So the crew watches as a beautiful female dignitary boards and is escorted by Inara to her shuttle for some “companion-ing” [cough cough]. This leads to one of my favorite quotes in all the verse: Jayne’s “I’ll be in my bunk.” 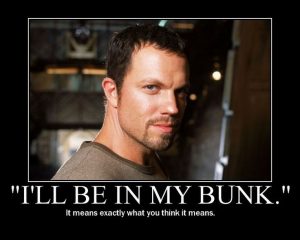 Wash commandeers Zoe’s place on Mal’s mission; much to Mal’s discontent. And of course Wash rolls up to the scene of the drop rocking a shirt that would draw the envy of Steve McGarrett.  However, just when things seem to be going swimmingly, Niska’s men spring an ambush and take Mal and Wash captive.

Niska is a fan of our pal Shan Yu and begins torturing Mal and Wash. At first he is met with nothing more than the back-and-forth bickering of our boys as they work through the dynamic that exists among the two of them and Zoe:

Wash: I’m the one she swore to love, honor, and obey!

Mal: Oh, there’s plenty of orders of mine she didn’t obey.

Mal: She married you! 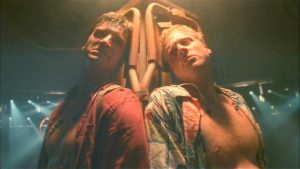 Zoe comes to realize that the guys are late returning and mounts a rescue mission.  She rounds up all of the crew’s recently won riches and boards Niska’s space station for a trade: The money for the men.  But Niska, having been privy to Mal and Wash’s infighting about Zoe’s affections and loyalties, decides to place Zoe between a rock and a hard place:

Niska: I think this is not enough. Not enough for two but perhaps sufficient for one…Ah!  And now you have –

Zoe (cutting him off): Him (pointing to Wash).  I’m sorry.  You were going to ask me to choose, right?  You want to finish?

With all but Mal back aboard Serenity, the rest of the crew gathers and plans to storm the space station to rescue their beloved captain. (Well…its doubtful Jayne was motivated by affection for Mal. He thinks its suicide, but he is a sucker for action and plenty is promised, so he gears up.)

Even Shepherd grabs a weapon after seeing Mal’s severed ear (a gift from Niska).  Zoe questions him initially:

Zoe: Preacher, don’t the Bible have pretty specific things to say about killing?

Book: Quite specific.  It is, however, somewhat fuzzier on the subject of knee caps.

[Side note rant:  Right before what used to be the commercial break, a huge gasp-inducing moment is dropped in which Mal is declared dead by his tormentors. This moment is completely killed by today’s streaming media. A new viewer would only suffer anxiety for a second whereas the original viewing audience was subjected to nail-biting nervousness whilst enduring yet another AFLAC commercial.]

But Mal is the freakin’ man under pressure – quipping his way through torture and even death. He eventually breaks his bonds and approaches Niska with the line, “You want to meet the real me now?!”

As the rest of the crew fights their way back to Mal, we’re treated to one of River’s strange savant moments. At first she is overwhelmed by the activity, but she grabs a gun, closes her eyes, steps into the kill zone, and fires three shots resulting in three deaths. That beats the heck out of my usual K/D spread! She then looks to Kaylee and repeats Kaylee’s earlier proclamation of victory: “No power in the verse can stop me.” This time the phrase carries mystery and even smacks of the downright scary.

The episode ends with a successful rescue. Zoe whips Wash up a meal, but before he can enjoy it Mal brings up an earlier piece of discussion between the two during their torture; namely that Wash believes that Mal should go ahead and sleep with Zoe to dissolve any lingering sexual tension between the two. The ensuing melodrama between Zoe and Mal leads to Wash whisking Zoe away declaring that this time it is they who would be heading to their bunk.

The Best Firefly Episode: Why I Chose ‘War Stories’

It is a difficult task – selecting a single Firefly episode and deeming it the shiniest of them all. But when the task was appointed to me, “War Stories” immediately came to mind. This episode gets so much right. It is absolutely overflowing with the characteristic comedy of the Firefly series, balances the laughs with a hefty dose of action, and all of it takes place upon the foundation of palpable drama: Zoe and Wash’s marriage on the rocks and Mal and Wash in real danger. You know it’s getting heavy when Book grabs a gun!

And I love Niska as a villain. He’s scary in an unassuming way. His name sends chills down the spines of the crew of Serenity. When Mal’s blindfold is removed and Niska’s face looms before his, he lets out a stream of obscenities (in Chinese, of course). Also: I’m pretty sure this is the cussing-est Firefly episode as well. Even Book lets a string fly!

I can’t recommend “War Stories” highly enough, but I also can’t advise that you watch it without having watched every episode that precedes it. That isn’t about knowing where the meds came from either. It’s about the characters, their development, and your attachment to them. That’s kinda what most of Whedon’s winning formula is built upon, so don’t miss that! Start at the beginning, view through to “War Stories,” and understand that once you’re done with it, you won’t be done with Firefly.

No. You’ll never be “done” with Firefly. And you’ll be better for it.