If you want to travel the universe, you need a ship, and every ship has its captain.  But not all captains are created equal.  This simple truth has lead to some seriously complex debates, most notably: Picard or Kirk?!

Today, it’s a nerd showdown, and we’re looking at two space cowboys who are captains in their own rights: Guardians of the Galaxy’s Peter “Star-Lord” Quill and Serenity’s Malcolm Reynolds.

In an attempt at fairness, I am going to compare the two only from their movie properties – ignoring the comics for both and Firefly entirely.  This is in part because I am much more familiar with Mal’s source materials than I am Star-Lord’s, and I wanted to level the playing field somehow.  This approach undoubtedly hurts the arguments for both characters, but it is a bullet worth biting for a more balanced approach.  I will grant, though, that this approach probably hurts Mal more than Star-Lord, given that Guardians picks up at the crew’s inception and Serenity takes place long after that foundation has been laid, but bear with me.

Star-Lord and Malcolm Reynolds have much in common:

I decided to compare and contrast them along two lines:  Leadership and Tactics.  Leadership because they’re both in charge of a crew, and how they do in that place of authority matters greatly.  Their tactics will also speak of their decision making abilities and chances of success.

Star-Lord’s rise to leadership is interesting.  He is thrust into the position, but also more-or-less elected.  His first encounter with each and every member of his crew involves some sort of conflict: Gamora attacks him, Rocket and Groot capture him with the intent of turning him in for a bounty, and he has to talk a very angry Drax down from killing Gamora.  Yet they each find common ground and Quill becomes the de facto leader. 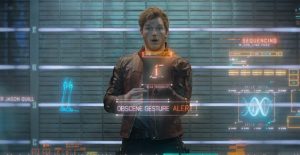 He tends to work with his crew a bit more democratically than Mal:  Gamora calls nearly all the shots concerning the mission surrounding the Infinity Stone, Rocket spearheads the prison escape while Quill takes orders…his crew’s voices carry a lot of weight when it comes to decisions.  This makes Star-Lord’s characterization a bit more likable than Mal’s, but I don’t necessarily think that makes him more effective.

Mal is more like a benevolent dictator:  His crew can speak up, but he always has the final say.  It is his boat, after all.  Occasionally, he has to lead from a place of authority; when his crew strongly disagrees with his decisions like Simon’s refusal to let Mal take River on a mission or when Mal commands the crew to string the dead bodies of friends along the hull of Serenity to avoid detection by the Reavers.  But more often Mal leads from a place of permission.  His crew willingly follows him on a mission that would almost certainly end in their collective deaths to Miranda and later to Mr. Universe’s base of operations.

When it comes down to the treatment of their crew, both are sacrificial and have obvious love for their comrades.  Star-Lord risks his life to save Gamora’s, even as Rocket tries to dissuade him from the headstrong move.  Mal, too, brings River and Simon back onto Serenity after Simon made it clear they were leaving because Mal realized the danger they were in and the ideology of leaving no man behind carries forward from his days with the Browncoats – much to the chagrin of Jayne.  Now granted this isn’t quite an apples-to-apples comparison, as Star-Lord seems to have a romantic interest in Gamora, but I have plenty of reason to believe he would have done the same for any of his crew.  Plus Mal’s rescue of Inara was not without some ulterior romantic notions.

Star-Lord thinks outside the box very well in a pinch:  Using the magnetic device to incapacitate Ronan’s foot soldiers, sending Gamora flying with one of his rocket boot attachments, and telling Rocket to use the industrial mining pod as a ram against the superior fire power of the Kree ships at Knowhere.

He also uses sleight of hand to protect the Infinity Stone not once, but twice (once with Gamora and again with Yondu).  He thinks very quickly on his feet, for sure.  I do question Star-Lord’s wisdom when it comes to his thirst for notoriety.  He seems upset that he is not well known.  Mal, on the other hand, much prefers to fly under the radar. 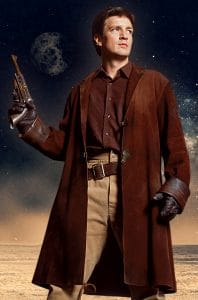 Mal is a big fan of redundancies and deceptions.  He’s going to do everything he can to put the odds in his favor.  He definitely favors proactivity over reactivity.  That’s why he carries Serenity’s homing beacon on his person during Inara’s rescue and why he has six additional nav sats on standby in case of pursuit.  Though that’s not to say he can’t roll with the punches.  Maybe his best tactical decision: the pseudo-recruitment of the Reavers to pierce the Alliance’s defenses at Mr. Universe’s.  His firefly class cargo ship had no chance otherwise.

Both are willing to take chances in order to achieve the mission.  Star-Lord’s “dance off” idea was a long shot.  So, too, was his grabbing the Stone.  The only other time that had been done the grabber exploded, but he knew that he had to do something to keep it from Ronan’s grasp or Xandar was doomed.

Similarly, Mal couldn’t know for sure that the defilement of his ship would ensure safe passage through Reaver territory; it had never been done before.  Both were calculated risks.

When it comes down to it, would you climb aboard Milano or Serenity? Would you travel the stars in defense of the galaxy with Star-Lord, or eek out a living while staying one step ahead of the Alliance with Mal?  Which would you follow unto death if need be?

As for me, I’d take to the skies with Mal. He’s hard, but he’s good. I trust his instincts, value his precautions, and favor his bluntness and refusal to pander to or tolerate bullcrap. He always seems one step ahead, and that’s enough for me.

Recap and Review of Agents of SHIELD Episode 217: Melinda