Recap and Review of Agents of SHIELD Episode 217: Melinda

After last week’s so-so episode that seemed to be setting up pieces for major plot turns, will there be some pay-offs this week in Agents of SHIELD Episode 217: Melinda? 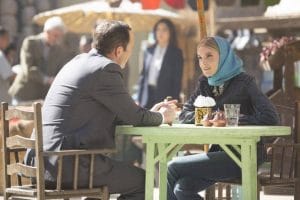 Agents Coulson and May are there to recruit her for the Avengers project, which is in the very early stages.  The approach goes badly. In the resulting shootout the superpowered Russian flees and a little girl is captured. The “calvary” team and SWAT guys go in, then there is a sudden radio silence. Coulson decides to break protocol and let May go in after them.  Once inside, May discovers that all the people are in some kind of brainwashed state, simply saying over and over again “I need your pain.”  And we will pause here because there is a storytelling element that merges this story and another later.

In the present day and time, May has agreed to help the Gonzalez SHIELD, provided that she is given control of the Coulson SHIELD base. Morse and others explain that Coulson has been using a vast amount of resources on something called the Theta Protocol. May clearly doesn’t know about it, which Agent Morse deduces from how she reacts to seeing footage of Deathlok Peterson free Hunter and Coulson.

It is later revealed that Coulson had Simmons doing upgrades for Deathlok but she thought the technology was being used for something else. Everyone is clearly trying to sort it out, but agents May and Morse are on the same page: Coulson isn’t a bad guy, but he may have been making some mistakes.

At the Inhuman HQ, we get a couple major plot points. Raina is unhappy and wants to leave but Gordon is trying to convince her to let him be her guide. It isn’t clear if she is buying it or not. 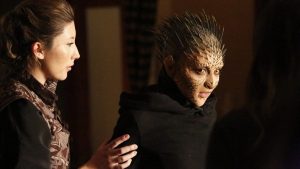 Skye spends time with her trainer Jiaying. Skye shows some control and seems to enjoy it. She makes a mountain shake and for a few minutes gets some crystal glass to sing different notes before they explode. In the midst of it, Skye does this heartfelt speech about how she has never had a family, that SHIELD was the closest she ever had and it crumbled and how she doesn’t even know her birthday. Jiaying cracks and tells her she was born on July 2, that she is her mom. But she asks that Skye keep that a secret from the others.

This is where the two storylines merge. Jiaying tells the story about a woman who stole some of the terrigen mists. We learn the women was the superpower Russian from May’s story, but the twist we learn is that it is not the mom who needed the mists for the powers, but instead the little kid, her daughter.

This story is told over the fight that Melinda is having with the mom, that ends in the Russian’s death. At that point, Melinda realizes the child was actually her daughter and was the one controlling the people, with a single swipe of her hand. Just as the girl is about to take out the SHIELD Calvary team, Melinda shoots and kills the little girl. Everyone inside has no idea what happened, assumes that she just kicked ass and took names. Yet May is heartbroken.

We see Agent Melinda May never be quite right again; it messes up her marriage, which seemed perfectly happy in the earliest scenes of the flashback this episode. We see her eventually get a requested desk job, which is where Coulson pulled her out of at the beginning of the series, if you remember. 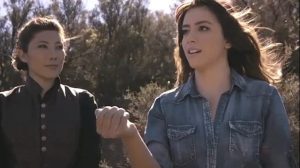 And because of the story of the Russian and her daughter, Jiaying and Skye need to keep their secret, as they don’t want the appearance and concern of favoritism. But they do go and have a dinner with Cal, which is heartbreaking to watch how much Cal seems to be at peace, telling the story of Skye’s birth, when Skye has said this is the last time she ever intends to meet with him.

The episode closes when Fitz is hiding in a bathroom, as the Gonzalez SHIELD was having him followed. And in the bathroom, he is able to get Fury’s Toolbox to open, which connects him to Hunter’s tablet. And Coulson and Hunter and Fitz need to reunite, as Hunter starts to walk him through how to escape!

[divider]Thoughts on Agents of SHIELD Episode 217: Melinda[/divider]
This episode is a better one than last. I did enjoy seeing Melinda May the human being, not just the superheroic bad-ass. It gave a dimension to the character that was lacking and now you sympathize with her more. I still don’t doubt that she is on Team Coulson, even if she is clearly upset about Theta Protocol.

The Inhuman stuff is surprisingly boring. Ultimately, we know that Skye will come to control her powers.  There just doesn’t seem to be much drama or excitement there. My Wild Theory is that Raina and Jaiying were working together to get Skye exposed to the mists. Because just when the family is starting to come together, it can’t in Skye’s case. The Raina and Gordon stuff doesn’t move me, in part because we haven’t been given enough to care about those characters much.

So, a decent 7.5 out of 10 nerds. With 5 episodes left, I am ready for some major plot movements and action. And soon. I am worried that we are stalled waiting for an Age of Ultron tie-in. Move forward; don’t just tread water.