After the big revelation of the new Director not being an Inhuman and May discovering that she is some kind of android, what will happen to the SHIELD team as they move forward with Coulson back in operational command?

Recap of Agents of SHIELD, episode 411: Wake Up 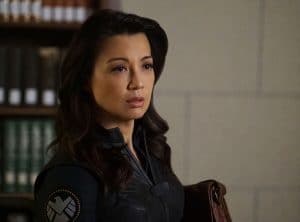 And…flashback. We run the clock back to the time when May is sent to Radcliffe’s to deal with AIDA and we discover how and why she was captured, after being tipped off from Radcliffe. She puts Agent May in storage, swipes her brain and then loads up Android May, who never seems the wiser. Until she is injured and she discovers that she is indeed an android, but never tells anyone.

Meanwhile, over the course of the story, we see May first struggle with the relaxing spa day simulation and then we see her escape, which ultimately turns out to be another simulation that AIDA and Radcliffe are constructing to hold her at bay. 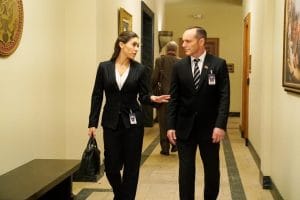 While this is going on, we see Coulson and Company plotting a visit to the Capital. In theory, the visit is simply to let Director Mace guide Daisy through a Senate hearing, but while there, Coulson and Yo-Yo want to bug the evil Senator Nadeer’s office. (And Mack doesn’t come because someone texted him and he left the bed with Yo-Yo to go deal with it.) But, while they are in the office and being guided by Simmons remotely, something goes wrong and they wind up captured.

Which leads to a sudden confrontation with the Senator and a discussion of who trusts who. And all the shouting and name calling felt too real and I tuned it out. But at the end, everyone went to their respective corners.

At the end of the episode, we see the resolution of the problem of the spy potentially when Fitz, who has been studying AIDA’s design, realizes that Radcliffe is the spy. And it is confirmed when he goes into the cell where Radcliffe is being held and shooting him in the head, revealing that he is just an LMD. The real Radcliffe is then shown to be chatting up Senator Nadeer, who says it may be time for Radcliffe to meet the Superior, who feels like the Big Bad that is coming for the season’s conclusion.

Review of Agents of SHIELD, episode 411: Wake Up

So, 7 out of 10 Nerds on this one. It moved some things along but the big reveals didn’t feel quite that big as revelations to me. Next week: the return of everyone’s favorite triplet: Patton Oswalt! Looking forward to an episode that looks to be high on comedy, which is coming at what feels like the perfect time!