Recap and Review of Agents of SHIELD, episode 410: The Patriot

After last week’s shocking beheading (and the quality comedy that went with it), what is in store for us this week? The previews for this week’s episode seem to hint there will be a big reveal about The Patriot, the new Director, and the titular title of this week’s episode.

Recap of Agents of SHIELD, episode 410: The Patriot 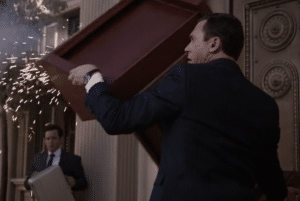 The early set-up is that Daisy and Mace are doing a PR event, with Coulson and Mack running security at the event. When a sniper attacks, they go into the protocol that was created by General Talbot, who is strangely there. That protocol means getting Mace, and his ever present sidekick Burroughs, out of the danger. As that happens, Daisy tracks down the sniper and takes him to the base.

But on the trip, the Quinjet with the Director, Mack and Coulson goes down, after first having Burroughs ejected out of it, along with a briefcase that he always has with him. Once on the ground, they discover that something is jamming all their communications. Mace gives a “we leave no man behind” speech and then heads out in search of Burroughs, even as Mack and Coulson are skeptical.

Meanwhile, the team back at HQ is trying to get the sniper to confess. But the Russian is basically unimpressed with their tactics. And General Talbot seems to be wanting to run the show. He keeps distracting Jemma until she finally looks at a file that is now unlocked for her, as she has become the highest ranking SHIELD officer: Project Patriot.

Talbot then makes a shocking confession: Mace isn’t an Inhuman at all. He is basically a created PR stunt, where the government created a variation of Dr. Calvin’s (Daisy’s dad) formula specially attuned to Mace’s body to give him powers. And the briefcase, which is really what Mace is looking for, has the injections that he needs to have powers. 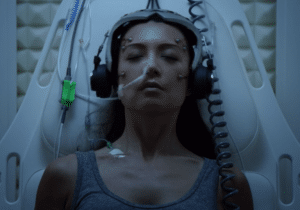 In the midst of all this, we see Agent May under sedation. But she is rejecting the peaceful scenarios they are pumping into her brain. Radcliffe and AIDA have a discussion over her previous actions and it appears, even moreso, she has her own thoughts about what is and what is not appropriate behavior.

The bad news? Death seems acceptable to her. When May escapes, they tussle with AIDA eventually hitting her with the drugs to sedate her. 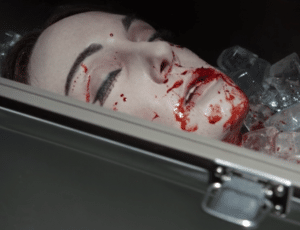 Coulson and Mack are brought into the loop about Mace when they discover the briefcase and he comes clean. They have seen the truck that has the equipment that is jamming them and the crew around it. They put together a plan and go to work.

Part of the plan is Mace bluffing his superhero persona while Mack blows up the truck. Coulson and the Director then hold up until Daisy and the Calvary arrive. That team had known where to look because Jemma used the AIDA head from last week, a cooler and some ice to fake being a Hydra trainer interrogator and the Russian sniper gave up his intel. Part of this fight also involved a pretty great fight sequence with Mack, LMD May and a bad guy. May was injured in the fight and later, when looking at her wounds, she discovers she is an android.

When they get back to the base, Mace explains that even the Vienna event he was famous for, saving a woman from an explosion’s debris, was a mistake. He is, in essence, a fraud. Mace says that he is resigning and Coulson, after thinking on it a minute, asks him to stay. They basically cut a working deal: Mace handles the PR and the politics and Coulson moves back into the operational and decision making role.

Review of Agents of SHIELD, episode 410: The Patriot

All in all, this was a good episode. It definitely was not the best of this season but it did a few things to move plots along. It is a solid 7.5 out of 10 Nerds. 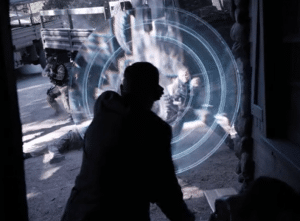 Coulson moving back into the operations lead role is going to be great. His use of his wacky electronic arm shield to save Mace after he faked out the bad guys was a great image and symbol of the power shift. It also allows them to continue to develop Mace as a character, which has some potential. (Side note: Coulson and Mack kick butt in suits? Very cool. Those men wardrobe well.)

LMD May knows she is an LMD. But given the chance to come clean with Daisy, she says nothing. This shift is going to be a change for sure. One can argue that last week shows what they do with LMDs and she is wise to be quiet from a self preservation point. But will she turn on SHIELD? And when?

Fitz and Simmons may be headed for a split. Fitz can’t let AIDA go, and we see him towards the end of the episode downloading the code from, and speaking to, the severed AIDA head. And when Jemma figures it out, she is not going to be happy.

Can The Last of Us Break the Video Game Show/Movie Jinx?