After the first arc of this season of Marvel’s Agents of SHIELD centered around Ghost Rider, his uncle, and the magic Darkhold book, it would have been completely understood if AoS slow played the new LMD storyline. It seemed like it was ripe for intrigue and subterfuge, working all along to see if and when the team would ever figure out that Aida, having read the magical tome, had broken bad.

Instead, they moved the plot along with the same remarkable pace that they have been working with all season. 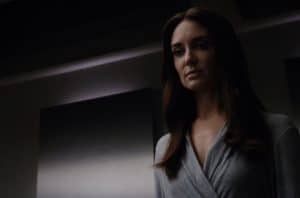 Two major storylines played out over the course of episode. First, as we all suspected, Aida and the Dark Side seemed to fully merge. From the beginning of the episode, where we see her wounds still in place from where she saved FitzSimmons, it is clear that something is wrong. Then we also see her talk to a medicated Agent May.

Eventually, we learn that the team has decided that the thoughtful thing to do is to reboot her system; the truth is that exposure to the Darkhold creates major issues. (This include what becomes a pretty fun ongoing dialogue with Mac, who keeps asking why these people have never seen a movie in the last 20 years with robots: they always turn on their masters.) Obviously, that mission to get her and reboot her does not go well.

When they arrive, AIDA is not happy. She takes out most of the team that came to get her, with the exception being that she leaves Fitz standing, and there is something that she says his name “Leopold” that makes you wonder…

The second storyline is that the Director, Simmons and Quake go to have a chat with the Senator, who had Simmons help break out an Inhuman from his rocky cocoon, only then to have Simmons whisked away. It turns out that the Inhuman in question is none other than the Senator’s brother.

They have some discussion and, after we learn that the Watchdogs are providing “security” for her and they all seem to be answering to a higher boss, when Quake, the Director and Simmons show up, they are able to offer her brother a better life but he chooses to stay with his sister, even after fighting with the security detail, revealing his powers, which are combat related but don’t necessarily seem to be super speed.

The sadness drops when as they fly away from the compound, the Senator kills her brother and they drop him into the ocean.

Meanwhile, AIDA does what the robots always do and has turned on her creators. She is after the Darkhold. Having removed pain from her programming and added in some combat abilities, she takes down the SHIELD HQ. Radcliffe and Fitz are able to eventually lock her out and reboot the system. 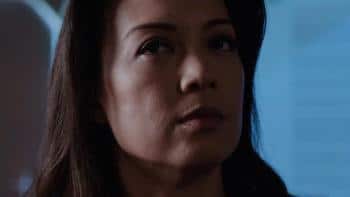 Coulson and LMD May are locked in a room and eventually freed. But the moment of the night is when AIDA is giving a speech and Mac and Yo-Yo come out the door behind her and Shotgun Axe, the reigning favorite member of SHIELD, removes her head, saying “Roll Credits”.

Only, credits are not rolled. In the few minutes that we have after that we see that there is another AIDA and that the truth is, Radcliffe has gone evil, as he wants the Darkhold for himself. And LMD May, who appears to have no idea she is an LMD is going to be his way to try and get it.

So, some thoughts:
“Roll Credits” is the best scene in a long time. It was so unexpected and sudden and yet a beautiful moment. It especially worked because I had serious doubts that they would “kill” AIDA so quickly. That there was another AIDA doesn’t really diminish it.

LMD May is going to figure out what and who she is and then it is going to be interesting to see what happens next.

The body of brother Inhuman developed another cocoon when it got to the bottom of the ocean, so that certainly creates some opportunity for some unique ideas about the Inhumans.

A solid episode of Agents of SHIELD, reminding us that it is good that it’s back. I give it a solid 8 out of 10 nerds.

How the Writing of Brandon Sanderson Can Shift Your Perspective