After coming back from a break with a very strong episode last week, we have come to the mid-season finale for season 4 of Agents of SHIELD. There is a lot of things to digest and anticipate moving forward.

Eli Morrow is full on evil Bad Guy now, and after recruiting the members of the gang we saw last week, he and his henchmen are at work. He is building something and what it is remains to be seen. But it seems to be impacting the greater Los Angeles area, whose journalists are actually paying attention and notice a SHIELD presence. 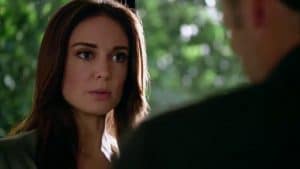 That presence? After some negotiation, Coulson convinces the new Director to send in their biggest guns: Daisy, Ghost Rider, and Yo-Yo, who are all added after some debate, and then AIDA, who Coulson reveals to be an android. And after May goes to pick AIDA up, they have assembled the team and are all ready.

When the strike team goes into attack, a fire nearly catches Yo-Yo and takes her down. But the flames are nothing to Ghost Rider, who charges in. And because fire and GoPros don’t mix, SHIELD is having a hard time seeing what is happening. In reality, uncle and nephew have a spat with nephew winding up pinned to a wall as the Uncle is making matter and doing an exposition dump about why he is a Bad Guy.

Fitz is on it and recognizes that Eli has been slowly experimenting with all the different elements and creating them. And Eli has arrived at Plutonium. But Fitz says the science doesn’t work: matter and energy aren’t just created. So, he deduces that Eli is tapping into some portal, extra dimensional force and the shaking is related to that.

So, Coulson and the Director create a pretty impressive plan.

While Team Science (Fitz, Simmons, and AIDA) work on a way to deactivate the thing with Daisy holding the Earth together, Coulson goes in alone to talk over the dangling plot points from the earlier exposition dump. And when the time is right, Coulson tries to get Robbie to Ghost out as the team strikes, and, you get a really amazing scene as we see the Director go mid-punch in a semi-cool new suit and Yo-Yo shows up and rearranges everything in a split second.

When she is done, the team all do their part with Robbie deciding to hold on to his uncle until he both vanish into the other dimension, as Team Science was able to trigger their machine, thanks to AIDA taking a couple bullets, and we learn that she is programmed to feel pain to be as lifelike as possible. 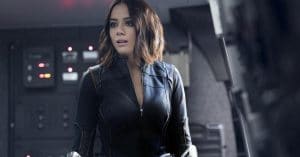 Daisy is nearly maxed out and has to go blow off some seismic steam and goes flying over Los Angeles before landing in front of all the journalist. And before she can give her “I just want to protect Inhumans” speech, the Director shows up, in full PR mode and thanks Agent Johnson, semi-officially welcoming her to the team.

Then we get a scene of the team celebrating, as Coulson and May drink their much talked about drink. But when we cut to AIDA’s house, we see her kill the agent sent to collect her, while she nurses the real May. And just like that Life Model Decoys are out in the wild, maybe led by a possessed android, who should have never read that Darkholde book.

Some thoughts on this half season:

The pace has been excellent. In a show that historically has felt like it was plodding along slowly at times, this half season has moved and really advanced some plots. We had a great half season of Robbie/Ghost Rider, a respectable send-off, and a chance to move forward. We finally seem to be putting the end to Emo Daisy as she has come fully back into the fold. AIDA and her shenanigans will likely move into front and center over the next half season, as we continue to see Phil and the new Director work together and communicate better. 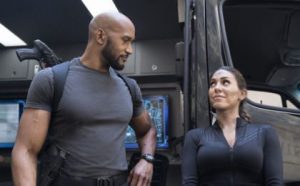 YoYo and Mack made out. Finally. In all seriousness, it has been an interesting play over the last season or so watching these two come together. I approve of the couple. How are the kids going to #ship this one? YoMa? MaYo? (And post-show Marvel announced a web series for YoYo, which I definitely am going to check out.)

Is AIDA Jocasta from the comics? Seems like a reasonable direction and one I predicted with her entrance. Should be interesting to see how quickly she is revealed. I can’t imagine it taking too long with May being her prisoner.

Who was the hatching Inhuman that Simmons met?

The fights and special effects on this show are as good as any on television. I watched part of a season 1 episode recently and, whew, the fights were…not good. At all. To see how far this show has come is pretty amazing and I am excited for at least this next half season!