The third group is comprised primarily of newbies – which is fun! – and I wanted to devise a hook that escalated to action quickly so we could get a few harmless rounds of combat (initiative, attacks, movement, etc) in before things really began to count.

Below I outline the Curse of Strahd hook that I took and modified to meet that need.

The setting for the “Plea for Help” hook remains the same, but with the following alterations:

1.  Upon entering the tavern, a friendly guard asks for all patrons to deposit their arms (read: weapons) with him for safe keeping.

If a party member wants to try and sneak a dagger or some such in unnoticed, make the appropriate checks (sleight of hand vs perception).

2.  The party notices that there is a growing ruckus in one corner of the tavern.  They see a large, muscle-bound thug gladly accepting an arm wrestling competition with a scrawny and very obviously drunk patron.

The large dude has the stats of a guard, only with an AC of 14 (since he’ll have checked his shield at the door).  The drunk should just be a commoner.

The big guy is flanked by two cronies who also have the guard stats, but with an AC of 12 (leather armor).  The drunk is surrounded by 1d4+2 other commoner patrons.

3.  Money is hitting the table as bets are placed.

The party is welcome to place a bet themselves if they wish.  Heck, might even be fun to have a couple of the 1d4+2 result to bet against their drunken companion for flavor.

If a party member wishes to take the drunk’s place in a pick-on-someone-your-own-size moment, allow it, of course!  Otherwise, progress to the contest itself.  But not before… 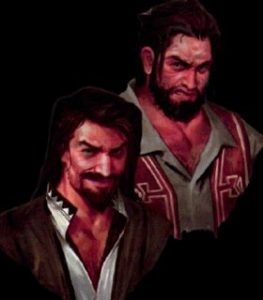 4.  During the betting stage, a well-dressed man enters the tavern.  He’s got a very twitchy-looking man in tow.

The man is Arrigal (NE male human assassin per Strahd pg 19).  He’s on essentially the same mission – to deliver the letter from the Burgomaster – but with a twist which we’ll arrive at shortly.

The man he has in tow is a 4th level Bard.  The only spell he has prepared that matters is Enhance Ability.  Once Step 6 hits, he disappears.

5.  The twitchy guy walks up to the commotion, places 1GP on the table next to the drunk, and pats him on the shoulder encouragingly before retreating back to the sharp dressed man (Arrigal) near the door.

With that touch, he quietly bestows Bull’s Strength on the drunk without anyone’s notice.

6.  The contest takes place and, to the shock of everyone except the two men by the door, the drunk easily beats the larger man with a quick, decisive, and loud slam to the table.  The larger guy stands up and immediately calls the man a cheat.  The accusations escalate until a punch is thrown and the tavern erupts into a brawl. 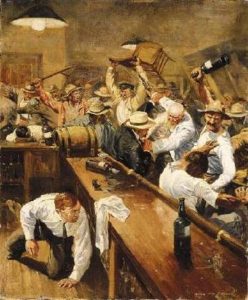 At this point, the party can’t help but become consumed by the melee as it spills over into their space in the tavern.  The drunk and the big guy are going at each other fairly exclusively, but everyone else seems indiscriminate about who they’re throwing punches at – including the party!  Every last patron fights until they’re knocked out.

All attacks are unarmed strikes unless the PCs (or NPCs under your control) grab items like beer steins or stools to use as improvised weapons.  I made all damage nonlethal, but if a character is Evil aligned and//or snuck in a weapon successfully and wishes to play for keeps, let him!  This would please Arrigal a bit if nothing else.

The party ought to be able to handle the fight fairly easily.

7.  Arrigal slow claps as he makes his way towards the only people left standing besides the barkeep and a few wenches who hastily ducked behind the counter.  He steps over unconscious bodies as he explains the situation.

He apologizes for the mess as he tosses a pouch of gold to the bartender to cover the expense of any repairs.  He then explains exactly as written on pg 19 of Strahd, only with the additional sentiment that he had to be sure he was recruiting capable men and/or women to see to his master’s need.  He doesn’t linger after dispensing the letter and the directions to Barovia as written.

This was a modification I did on the fly that really pulled the new players in and gave them a few consequence-less attempts at combat rounds to familiarize themselves with the systems.  We were even lucky enough to have a crit and a crit fail occur during the fight so they could see how those resolved, too.

Even for DnD veterans, this will take a clichéd and mundane adventure hook in a totally unexpected direction.  If nothing else, it is certainly a bit more compelling than a stranger just dropping a letter off with next to no explanation.

How did your party end up in Barovia?  Did you use an original Curse of Strahd hook, or did you do something completely new and different?  Tell us in the comments!