When I volunteered to serve as my local gaming group’s DM, I had almost no idea what I was getting into.  I had only played 2.5 sessions of Dungeons and Dragons in my entire life (2 full sessions and then half of one before a TPK).  I had no clue what was going on behind that pretty DM screen during play, let alone about all the work that preceded us gathering around a table.

I threw myself into the role and muddled my way through the first session well enough, I guess.  But I wanted to be better.  I knew improvement was possible, and I was willing to bet a few small, manageable tweaks could up my game tenfold.

What I present below is not a bunch of #protips.  They can’t be, as I am a total greenhorn when it comes to DMing!  But along the way – both through watching others in the role and reading Dungeon Masters Guides and articles – I’ve certainly experienced some refinement in my ability since session #1.

Here are 7 New DM Tips I Learned As A Newbie DM.

As you ready for a campaign, you and your group may be eager to jump right in as soon as the book drops.  Resist this temptation just long enough for you to read through the entire adventure!  This permits for a lot of things:

Your party may have to wait for you to put in this time on the front end, but I promise you its 100% worth it.  You can promise them it’ll be worth the wait and absolutely deliver on it if you follow through on this tip!

2.  Use visual aids whenever possible.

Minis are great and Dwarven Forge terrain is incredible, but neither are necessary when providing (at least) sufficient visual aids for the party and for you as a DM.

Give them a map – whether hand drawn or purchased and printed.  I dropped the $30 on super high resolution jpegs of the maps for Curse of Strahd and then ran them through PosterRazor to enlarge them.  A few pieces of tape later, and I’ve got a highly detailed and accurate map for the players to place their pawns on that match the ones I’m looking at in the book.

Use something – anything – to represent PCs and enemies in combat.  Let the PCs bring whatever they wish to the table to represent their characters so long as it is relatively small.  I currently use a Teenage Mutant Ninja Turtle Mega Bloks toy as my mini, and I’ve seen several folks use HeroClix in lieu of licensed minis. For enemies, I’ve used Skittles (if you deal the final blow, you get to eat it!) but right now I favor using mini d6s.  Each d6 will have a different number facing up which makes it easy for players to declare who they’re attacking (“I’m gonna use magic missile on #3.”) and easy for me to keep track of initiative and HP behind the screen.

And I have gotten into the habit of printing off images of the enemies and hanging them on my DM screen facing the PCs for an added visual bonus.

Plus having these things represented on the table helps minimize questions dealing with where the PCs/enemies are in space relative to one another and all but eliminates the arguments that can arise from differing accounts of that very thing.  No more he said/she said/you said.  Its right there for all to see.

3.  Combat isn’t everything (and can actually hurt your campaign).

Combat is fun, but it can so easily feel like a grind and actually detract from the larger narrative of your campaign.  In the campaigns I’m running, I spend some time looking over the random encounter tables and asking, Which of these possible encounters can I use to enhance the narrative rather than just throwing a monster at the PCs?

For instance, in Curse of Strahd I absolutely mandated a random encounter.  All of the groups I DM that book for have had the swarms of ravens basically escort them into Barovia as outlined on pg 32.  Why?  Because it is ominous (which totally fits the feel of Strahd) and because it can easily be tied to the Keepers of the Feather.  In fact, all of the groups made that connection on their own later on…but in the moment it totally freaked them out and had them asking questions amongst themselves.  Cannon fodder don’t usually do that.

I don’t treat DnD like Pokemon:  Random encounters aren’t the name of the game.  If you’re intentional with every combat, then every combat can feel significant as opposed to a grind.

Nothing kills combat flow faster than, “Hold on, let me look that up.”  And this doesn’t even touch on the difficulty of literally juggling two or three books during every encounter.

I keep a 3-ring binder on hand with all relevant enemy stats (HP, AC, stats and mods, attacks, resistances, vulnerabilities, etc) for all possible enemies in any given area.  I also take the time during my prep to list all spells and their effects and damages in the same way.  I very rarely have to open a reference book during play.

I also started pre-rolling initiative for enemies.  Here’s what I do:

Then when it comes time for PCs to roll initiative, I simply drape the enemy card over the top of my screen and place it in the right spot according to the PCs’ initiative (I have all PCs make a similar card at the start of the campaign with their character’s name in the middle of the card, their real name in the bottom right, their passive perception in the top left, and their class in the top right).

Take a gander at what my DM screen looks like during any encounter below.  The PCs only see the blank backs of the cards and any enemy pictures I might provide.

Lastly:  I promise you that somewhere on the internet there is a group dedicated to DMs of whatever adventure path or module you’re running – no matter the system.  Find one on reddit, Facebook, or a forum and benefit from the successes, mistakes, and tweaks of other DMs!

What I mean is help facilitate their crazy stunts and long shots!  If they wanna do something daring and creative in combat or role playing, make it a reality to the best of your abilities and knowledge of the rules…erring on the side of the PC.  I’m not saying you have to make sure it succeeds or goes exactly according to plan, but let them have a go at it!  The dice will do the rest.

The DM for the game in which I’m a PC is great at this.  He loves it when we get creative and it excites him at least as much as it does us just to try.

6.  Elect an historian for your group.

I heard this recommended at several panels I sat in on during Dragon*Con and it came up again in The Kobold Guide to Plots and Campaigns.  Having someone in the group volunteer to take notes during play (could be you, could be a player) and send out a summary of the events sometime before the next session keeps things fresh in mind.

I tried doing this by recording sessions, but a 6 hour session meant 6 hours of audio I’d have to listen 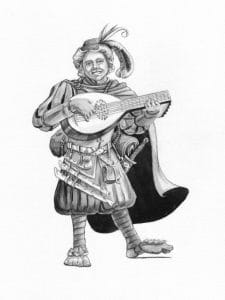 back through to pull this off!  Instead, I’ll be refining my note taking process during play to make that a much quicker deal in the end and send out a “Last time we left our heroes” emai before the subsequent session.  This’ll keep everything fresh; particularly useful when your groups go weeks between sessions (like mine), but no less useful for groups that meet weekly.

The historian’s main job is to keep track of peoples, places, and things relevant to the campaign on behalf of the group, but that’s not to say you can’t have a little fun with the role!  I also hope to send each individual player an Overwatch-style stat email with their damage dealt, healing, killing blows, etc.

Think of the historian as your group’s own bard!  He keeps track of their adventures so that he might regale them with their own story later on.

Once you have all of the preparation from numbers 1-4 done, it requires no additional work for you to run the same campaign for any number of groups.  If your DnD itch just isn’t being scratched by leading the adventure for one group, consider doing it for two!  99% of the work will already be done on your end.

I’m running three separate Strahd campaigns, and I only had to prep the entire book for the first group. For the other two, I just flip backwards in my 3-ring binder a few pages when I arrive and away we go!  Plus I’ve found that the later groups benefit from the first – I know the material better and have more practice with it, so they are much smoother and polished.

Of course, if you do this the historian becomes all the more important so you’re able to keep track of which group is doing what and where!

In another year I’m sure I will be able to add to this list, but if you’re new to the DM position like I am I promise any one of these – and definitely all of these in combination with one another – will quickly amp up your presentation.