The Story of a Dungeons and Dragons TPK: Three Letters, Six Deaths

Saturday night my D&D group and I sat down for another round of Hoard of the Dragon Queen. We were all pretty excited to play because we had reached level three which afforded each of us all new mechanics and abilities. We grew ever deadlier, we knew it, and we wanted to kill all the things and loot the resulting bodies without shame.

We entered a cave deep behind enemy lines and made quick work of the two guards – further boosting our egos. Two rooms later we took on a dozen baddies; four armored guards and eight cultists. Our strategy was decent, but many of us took the damage that is inevitable when you’re outnumbered 2:1.

A couple of us had a limp, but we also just went beast-mode on our largest group of bad guys yet. And stopping now was not an option. A guard and three cultists had quickly made a strategic retreat as soon as we had entered that crowded room. They were up to something, and we needed to chase them down.

Upon entering the next room, we found no guard or cultists. We decided to quickly check beneath the area rugs for secret escape hatches and lo and behold! We then descended a rope ladder…to our collective demises.

Dungeons and Dragons TPK: The Battle

We were in a shrine of some sort. Pictures of various dragons adorned the walls and a statue of a three headed dragon emerging from a volcano dominated the corner to our southwest. Between us and it: The guard and cultists we were looking for along with two of the “big bads” we had encountered briefly earlier in the campaign.

But we were undaunted. In fact one among us, our dragonborn, immediately went into a rage because he had some beef – a score to settle – with one of the bosses. There was no retreat. There was only battle.

We focused on the guard and the cultists first to lessen the number of potential attackers.  They died

swiftly. The female boss seemed content to fight from afar; she even cast some sort of spell that cursed the fifteen foot diameter of space at her feet in such a way that to pass into or out of it was perilous, so melee damage was not an option.

The male caught three of us in a cone of dragon’s breath that nearly killed us all right then and there. Our cleric had his work cut out for him as he ran from PC to PC stabilizing and healing while selflessly ignoring his own wounds.

The female sent an ethereal sword into the battle field that complicated maneuvers in the small shrine. It mercilessly hacked two of our number to the point of saving throws. It was now 4 versus 2, but the numbers tell a tale that is incomplete.

Of our remaining four, none of us had more than half his HP left and most were down to less than a quarter health. On top of that, the female boss kept healing herself from damages dealt from afar. We seemed to be getting nowhere with her.

Then our dragonborn dealt the final blow to his nemesis. He then (out of game) nearly woke the neighborhood with his shout of triumph and sent the rest of the table to laughing with his posturing. With one down, we focused our efforts on the regenerating female and had her KO’d in a further two cycles.

Dungeons and Dragons TPK: The Mistakes

And yet here is where we made our two mistakes.

My lock picking was unsuccessful and it triggered a trap that filled the room with acid fumes.  We all took immediate damage based on the pass/fail of the saving throw…and everyone passed out except me – Viag.

There was nothing I could do for my companions with 8 HP left in a room now fogged by acid, so I ascended the rope ladder with a hope to live! I attempted a short rest to roll some hit die and gain some much-needed HP before attempting the long journey back to town. 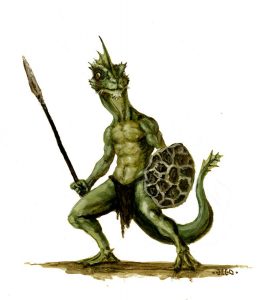 It was interrupted by four kobolds.

With 8 HP and channeling my inner Mighty Mouse (that’s a halfling joke), I beset upon the kobolds.  They were faster than me, so running was not an option.  Plus they blocked my only exit, so they’d have had attacks of opportunity – any two of which might have spelled my immediate doom.

I dropped one of them before they got within range of their weapons. During the next cycle, one missed and another hit for 4 damage. I dropped another.

Then the death blow was dealt – I took a further 4 damage from one of the remaining two kobolds.

Dungeons and Dragons TPK: The Weight of Defeat

With a sigh we all pushed back from the table. Our characters lie strewn about on the map, dead. We all knew death was a possibility, but its reality stung more than we anticipated.  There lie Viag – my first ever D&D character build – alongside Shifukato and Fangrim, my second and third builds respectively on behalf of my fellow adventurers.

As much as we loved our now dead characters, we voted to roll all new ones and try our hands at a different module. “Taps” would have been appropriate, but silence rang instead. 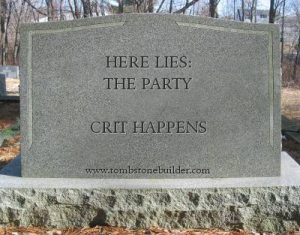 So this adventure – the first for all but one of our party – had reached its end. During our next
adventure, we’ll be wiser. With the one exception, we’re just a bunch of newbs.

But we’re a little less green on this side of our TPK (total party kill).

We’re definitely getting the gang together for another adventure soon. We’re debating between giving Shadowrun a go (for which I have a character rolled a ready to go in Braxxus) or another D&D module (in which case I will undoubtedly play as Kalla, my tiefling warlock).