By Michael Adkins On Aug 11, 2015 Last updated Nov 28, 2020
"Solarized Ninja" by chrishusein is licensed under CC BY 2.0
Share TwitterReddItPinterestFacebookEmailPrint

When it comes to building your character for Dungeons and Dragons, I recommend you roll up someone not just that you can play, but that you can be.

Anyone can throw a d20 around, but not everyone can do so as a convincingly-played high elf noble with a superiority complex or a surly dwarf fighter with bloodlust and few (if any) morals.  So when my buddy Ryan expressed an interest in campaigning and gave me permission to build his character, I did so with him in mind and knew the perfect class: Ninja.

As of right now, there actually isn’t a ninja class in 5e, so I had to get creative.  I read a couple of ninja builds involving the rogue class (here’s a solid one), but since my character, Viag, had the rogue class covered, I thought I might roll up a ninja-by-way-of-monk instead. 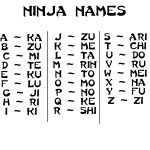 The one task I left solely to Ryan was the name.  His first choice was “Bob,” which I vetoed.  It needed to at least sound ninja-y.  So he found this chart and spelled his name out accordingly, dubbing his ninja Shifukato.

I used the same chart to work his dad’s name into Shifukato’s backstory, too, as a bit of an easter egg.

Shifukato (alias) grew up a member of the Kagonesti clan of wood elves and took to the monastic tradition as did his father Mirishikiari to train as a ninja. He quickly rose among the ranks of the clan’s most deadly fighters, becoming the youngest ever to attain the jonin title. Shifukato did not want to have to wait out his father’s remaining centuries to rise to kage, so he staged a coup. It failed. Only he survived (his coconspirators were all killed), and his father, showing mercy, exiled Shifukato, branding his face to indicate he was now without a clan and therefore enemy to all, even his own. Mirishikiari’s last words to his son were a promise: “My mercy is not without borders. If I see you again, I will not hesitate to kill you myself.” Shifukato now wanders with a perpetual target on his back, but he is not without the means of preserving his life against even the most deadly foe.

Shifukato is 5’11” and weighs in at 135 pounds; right about average for his race.  The most distinguishing characteristic of his is the brand that runs under his left eye that reads ronin in elvish.  Because of its placement, not even the traditional balaclava mask of the ninja obscures it completely, making it difficult for him to conceal.

I chose the charlatan background, granting him proficiencies in Deception and Sleight of Hand as well as a disguise kit and a false identity.  That is a handy combination of skills and tools for infiltration and covert-ops; a nod to the more historically accurate means by which ninjas managed as much.  Plus, you know…when pretty much every other ninja is out to kill you, it doesn’t hurt to have a secondary identity and the requisite skills to muster an expert-level disguise!

As a monk, Shifukato relies primarily on his Dexterity modifier.  That is one of his saving throws, and, so long as he is unarmed or using only a monk weapon and has neither armor nor shield, Martial Arts lets him roll Dex for attack and damage instead of Strength.

Martial Arts also grants Shifukato a bonus action in the form of one Unarmed Strike for an additional 1d4 plus Dex mod+proficiency bonus (that’s +5 for this clanless ninja).

Unarmored Defense means that his AC=10+Dex mod(3)+Wis mod(3), granting him a 16 to begin with.  Not too shabby for not wearing a shred of armor!

His wood elf-ness also grants him a higher walking speed (35), Darkvision, Keen Senses, and Mask of the Wild (can attempt to hide even when only lightly obscured); all ninja-esque perks!  Elves also get +2 to Dexterity, which is awesome since this is Shifukato’s main stat!  Plus that Dexterity bonus and proficiency bonuses elevate his Stealth and Acrobatics to heights worthy of a true ninja.

Lastly I took the liberty of renaming Shifukato’s equipment to better reflect his ninja background.  His shortsword became a wakizashi and his darts became kunai.  These, along with his Unarmed Strike, get a +5 Attack Bonus.  Dude is deadly.  If I’m reading this right: Assuming both his wakizashi and bonus action Unarmed Strike land, he does a minimum of 8 damage.  Yikes!

Given his background, I pegged Shifukato as Chaotic Neutral, which is handy because Ryan can 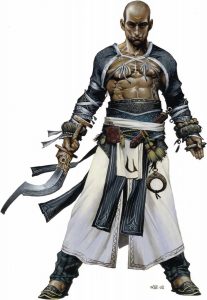 totally get his head into that space and play him well.  Very sneaky and very deadly right out of the gate.

When he reaches 3rd level, I’ll let Ryan determine which of the Monastic Traditions he thinks fits Shifukato best.  Way of the Open Hand would be an interesting play and seems to be the internet’s preference, but I kinda dig Way of the Shadow myself.  It amplifies Shifukato’s ability to become one with the shadows – even allowing him to render himself invisible in dim light or better! – and at the 17th level he gains the ability to make a melee attack of opportunity against a creature struck by another player that is within 5 feet of him.

Really looking forward to seeing Shifukato in action!  Though I won’t be playing him, I will still take a little bit of fatherly pride in all that he accomplishes.

Thanks for reading. If you are interested, here’s a look at some other classes and races: Wizard, Goliath, Ranger, Cleric, Rogue.

How to Make a Good Fantastic Four Movie