This is the story of Rema Twa.

Remy’s life has been filled with more than her share of heart break, which drove her to be reticent and withdrawn. Remy always had both a wisdom that belied her young age and a competency in the wilds of nature, which made her living a withdrawn life on the lands outside of town come naturally. Extremely introverted and uncomfortable socially, Remy has difficulty forming bonds, but she had begun to let her guard down and slowly developed a circle of friends. Perhaps this made the lost that much more crushing.

First, there was a guy (Doesn’t every heartbreaking backstory involve a love lost?). But Yoruba wasn’t any ordinary guy. He was as socially awkward and withdrawn as Remy.

But perhaps precisely because it didn’t make a lick of sense, Remy and Yoruba felt a romantic bond. Both socially uncomfortable, their romance played out like a scene from Freaks and Geeks, but those few who were close to them smiled inwardly, thrilled Yoruba and Remy had found each other.

No one was more supportive than Yoruba’s caretaker, the devout and compassionate priest who took in Yoruba when his parents had died, and whose kindness had begun to help Remy open up to a community of friends. This priest was the kind of person that oozed goodness and integrity, the kind of person that you wish the world had a million more of. That’s why his needless murder was so heartbreaking.

For every person that shines light into the world, there are a hundred who bring nothing but darkness. Remy, Yoruba, and 3 more of this small circle of friends, watched in horror as the priest was knifed down in front of them. Powerless to stop it, their only recourse was to flee in exile, barely escaping with their own lives.

By now you may have figured out that Remy is entirely fictional. Remy is one of my characters in my D&D 5e games, a Ranger that still languishes at level 1. Much like my D&D 5e cleric and my 5e wizard, I gave Remy a name based upon my real life travels and from nerdy little influences that I felt served her backstory and personality.

The name Remy Twa is a cheat. The Twa are a people group that inhabit Tanzania and portions of Burundi, Africa. Most of us have heard the Twa referred to as Pygmies. The first time I shook the hand of a Twa gentlemen, I was at 5’10” standing next to a man who stood no taller than 4’6″, but was immediately struck at how resourceful and capable he is. I imagine Remy, my D&D 5e Ranger, to be as resourceful and capable as Remy, the Burundian man of Twa heritage I had met.

I can’t say it enough, I really like how this new version of D&D plays up the creation of interesting backstories for characters. While many of us might know to put more skill points into a Ranger’s dexterity score, I wanted to also put intention toward the character’s backstory, with the hope that it would make for fun role playing situations later.

Now that you know Remy’s backstory (an important part of D&D 5e), we’ll talk more about the mechanics of a D&D 5e Ranger.

Wearing leather armor and using a d10 for hit points, Remy is formidable. Armed with a longbow, Remy wouldn’t be the first person to stick her head into an owlbear den…er, actually she would poke her head into an owlbear den. You see, the Ranger class from D&D 5e has a feature called ‘favored enemy.’ I chose owlbears and orcs for Remy’s favored enemies so she get special bonuses against those creatures.

Rangers are also excellent trackers, having the ‘Natural Explorer’ and ‘Wanderer’ abilities, meaning they have an excellent memory for geography and maps. They are elusive as well. Their ‘Mask of the Wild’ ability allows them greater success at hiding in foliage.

I imagine Remy would her her ‘Mask of the Wild’ frequently, preferring to stay out of sight, only to suddenly rise with her long bow to take out an enemy. Using dexterity plus proficiency bonus, Rangers get an excellent bonus to hit and a longbow’s damage is 1d8+dex bonus, meaning they can deal out some pretty good damage, all while taking enemies out from afar. 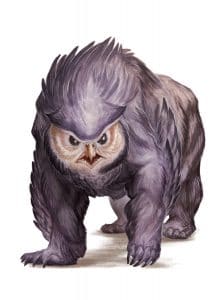 Yet now is where the ‘but’ comes in. At 1st level a D&D 5e Ranger feels under-powered and a little bland and boring, to be honest. But 2nd level is only 300 experience points away, and the Ranger adds two things that are critical to the class:

The spell list for a Ranger isn’t going to come close to matching that of a Wizard, of course, yet it’s still hard not to feel a touch disappointed at the initial offerings for the Ranger class. Hunter’s Mark grants an extra d6 against opponents, Animal Friendship is thematic, Ensnaring Strike is situational, and Cure Wounds is always welcome, but the spell list isn’t going to fill you with the pure joy of a white unicorn.

The free Elemental Evil Players Companion adds Flame Arrows, a 3rd level Range spell that allows you to imbue your quiver for an extra 1d6 damage, which is nice. Speaking of 3rd level, at the 3rd character level a Ranger selects an archetype: Hunter or Beast Master. I haven’t played around with those much, but my initial impression is a touch ‘meh.’

Creating a Ranger Using the 5e rules of D&D

Should you create a Ranger using the 5e rules of D&D? It’s simpler to affirm that I’m wholeheartedly enjoying my time playing D&D 5e, regardless of the class I’ve played. While I’ve enjoyed leveling my cleric to level 2 and my wizard to level 5, I will say that I can’t wait to get Remy (my D&D 5e Ranger) to the table more often.

The 5th Edition rule set has done an excellent job providing guardrails so you can create engaging backstories for character, plus the factions of organized play (Remy is a member of the Emerald Enclave) are fun and have added even further to the role play.

5th Edition combat and spell rules are excellent as well. A Ranger feels like a Ranger from way back when, which seems obvious, but is vitally important to get right. D&D 5e got it right.

But while the final verdict is a thumbs-up, I can’t whole-heartedly recommend a Ranger. As I mentioned before, they can feel a little under-powered and uninteresting until they get their spells.

Still, find a gaming group and give a Ranger a shot. In the meantime, Remy will be adventuring, hoping to live up to the lawful good example of his caretaker, and hoping that one day he can be reunited, at last, with Yoruba.