I want to introduce you to Yoruba Oya.

Yoruba’s life has been filled with more than his share of heart break, although for brief period things were wonderful, idyllic even. Perhaps this made the lost that much more crushing.

Yoruba is exceptionally intelligent, and has always been happiest among his books, researching and learning, yet always keenly observant to the things around him. Extremely introverted and uncomfortable socially, Yoruba has had difficulty forming bonds, but with those he does connect with, he is extremely close. Two such bonds necessitate mentioning.

First, there was a girl (Doesn’t every heartbreaking backstory involve a girl?). But Remy wasn’t any ordinary girl. As socially awkward as Yoruba, Remy kept far to the outskirts of the community, and by no logical explanation should have been attracted to Yoruba.

But perhaps precisely because it didn’t make a lick of sense, Yoruba and Remy felt a romantic bond. Both socially uncomfortable, their romance played out like an awkward scene from Freaks and Geeks, but those few who were close to them smiled inwardly, thrilled Yoruba and Remy had found each other.

For every one person that sows light into the world, there are a hundred who sow nothing but darkness. Yoruba, Remy, and 3 more of their closest friends, watched in horror as the priest was knifed down in front of them. Powerless to stop it, their only recourse was to flee in exile, barely escaping with their own lives.

By now you may have figured out that Yoruba is entirely fictional. Yoruba is one of my characters in my D&D 5e games, a wizard that just hit level 3. Now that you know Yoruba’s backstory (an important part of D&D 5e), we’ll talk more about the mechanics of a D&D 5e Wizard.

BY the way, this is all a part of my level 20 villainous plot to have the entire world experiencing the joys of playing D&D 5e. Soon, Nerds of Earth’s jack-booted bugbear thugs will be arriving at your door to push a 20-sided die into your palm. Resistance is futile.

Wizards are often referred to as “glass cannons”, meaning they can pack a powerful punch, but often can’t take a hit themselves. This still feels true for wizards in D&D 5th Edition (5e).

Unable to wear armor and using only a 6-sided die for hit points, wizards should never be the first character to poke their head into a owlbear lair. But even at level one they can cast 3 cantrips (the term for a spell that can be cast every round without penalty). Yoruba makes frequent use of Ray of Frost (1d8 damage, plus a slowing effect) and Fire Bolt (1d10 damage).

I like to imagine Yoruba with a bit of a fire and ice thing going on, perhaps with a wizard’s staff covered in frost, yet with a burning ember at the end. In fact, that’s in part how he received his name.

Origin of a Strange Name

Much like my D&D 5e cleric, I gave Yoruba a name based upon my real life travels and from nerdy little influences that I felt served his backstory and personality.

Oya is a character in Marvel’s Wolverine and the X-Men comic, who got her name from a Santeria warrior. Oya is a young African female mutant who has the power of fire and ice. I love the X-Men and I love the elemental nature of my wizard character, so the surname was set. I created Yoruba Oya as a Turami human, which are the people of D&D Forgotten Realms that we’d in real life most likely associate as having African heritage. The Yoruba are an African ethnic group that has a deep history in religion and mysticism, so I liked that real world head nod for my D&D character. Plus, Yoruba Oya just sounded like a cool wizard name to me.

I can’t say it enough, I really like how this new version of D&D plays up the creation of interesting backstories for characters. While many of us might know to put more skill points into a Wizard’s intelligence score, I wanted to also put intention toward the character’s backstory, with the hope that it would make for fun role playing situations later.

I don’t mean to say that Yoruba is nothing more than a bookworm, although this has made for some interesting times at the play table. I’ve tried to play up Yoruba’s introverted nature, taking the lead whenever the adventure calls for a character to actually…um, not take the lead. I have Yoruba speaking up infrequently, but he’s often the party member who does the research, solves the riddle, or deciphers the code.

I also play up his observant nature (he has the D&D 5e Feat that allows him to read lips), a skill that often lets our adventuring party collect news and intel. In fact, during our last adventure, my DM remarked, “Man, I forgot your wizard could read lips! Well, he can tell the two mercenaries in the corner are talking about…”

But I also play up the fact that Yoruba is a CANNON. Sure, he’s a nerdy little bookworm, but my, oh my, the spells he’s learned in those books! Besides the aforementioned Ray of Frost and Fire Bolt, Yoruba has 4 1st Level spell slots and 2 2nd Level spells slots, being that he just dinged level 3.

For other spells, I selected Magic Missile since it’s a classic, and Burning Hands, since it’s an OMG SOMETIMES YOU JUST NEED TO GO THERMONUCLEAR.  To support this, I’ve decided to choose the School of Evocation, one of the many Arcane Traditions that D&D 5e wizards can focus on once they hit level 2. Evocation allows me to sculpt my spells so I can prevent unintentionally going thermonuclear on my teammates, but I won’t receive full benefits of the School of Evocation until higher levels.

The decision to go evocation was either utterly worthless or the most valuable thing I’ve ever done for my character. I’m not yet sure which is the right conclusion. In either case, I intend to press on, because darned if I’m not having a good time.

To round out my other spells I intend to choose a very diverse set. So while I’ll still have my fire/ice thing going on, I’ll be able to cast more obscure and situationally dependent spells that will allow me to differentiate from a D&D 5e Sorcerer class, while also being of helpful utility to my adventuring party.

Should I Roll a Wizard?

You could say I’ve drank the D&D 5e Kool-Aid, but I have a pro-tip for you. Those of you who are perpetuating analogies involving cults from the 1970’s: 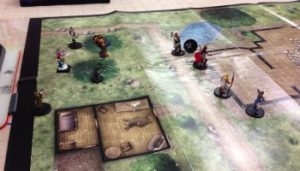 People who ‘drink the Kool-Aid’ are dead and therefore can not play a D&D 5e wizard.

It’s simpler to affirm that I’m wholeheartedly enjoying my time playing D&D 5e. While I’ve enjoyed leveling my cleric to level 2, and I can’t wait to get Remy (my D&D 5e Ranger) to the table, I’ve had a fireblast playing my wizard.

The 5th Edition rule set has done an excellent job providing guardrails so you can create engaging backstories for character, plus the factions of organized play (Yoruba is a Harper)are fun and have added even further to the role play.

5th Edition combat and spell rules are excellent as well. A wizard really feels like a wizard, which seems obvious, but is vitally important to get right. D&D 5e got it right.

I invite you to find a gaming group and give a wizard a shot. In the meantime, Yoruba will be adventuring, hoping to live up to the lawful good example of his caretaker, and hoping that one day he can be reunited, at last, with Remy.