After last week’s Beth centric episode, where we learn about what has been happening in Atlanta, this week’s episode of The Walking Dead – Self Help – is going to shift to Abraham and Team DC, as they are on their way to deliver Eugene to DC, where he says he can heal the world.

As the team is cruising down the road in the church bus, there seems to be the normal kinds of small talk happening.  Abraham jokes about his relaxing grooming standards as he comes closer to Washington DC, and what he sees as retirement.  The conversation then shifts to a moment as Eugene confesses to thinking about the priest Gabriel and his actions before defending his haircut because his boss at the Human Genome project liked it.  In the midst of it, the bus suddenly is smoking and flips over.  (At this point, I’d like to remind everyone that you were warned.  That church bus was a death trap and had no chance of making it to DC.)

The story then cuts to flashbacks of Abraham’s past and backstory.  Over the course of the episode we get several of these.  In this particular one, we see Abraham using a canned good and beating someone to death.  As the shot fades back, we see several dead bodies, all presumably from his hands.

As he comes to following the crash, Abraham calls out for Eugene.  After a quick assessment of the situation, the team exits the bus, taking on the now surrounding zombie horde.  Tara gives Euegene a pep talk about now is the time to be brave.  In the midst of the fight out of the burning bus, Tara saves Eugene and he eventually returns the favor.  After the fight, the team has a discussion about what to do next as Abraham’s hands bleed.  As Maggie goes to rescue the first aid kit, the whole bus is engulfed in flames.  Abraham is a little bit scary in his desire to push forward, but settles down when Glenn talks him down and they settle on everyone being on the same team with the same mission.  As they move forward, Eugene sticks back, taking a moment to spit on the zombie he killed in defense of Tara.

In the second flashback scene, we see Abraham looking for his family after having killed the people in the canned good aisle.  Whe he finds Ellen, his wife, she is shaking uncontrollably.

Back in the present, the team enters some kind of bookstore and then after a quick assessment, start to mine the water from the toilets, rearrange the shelves for security purposes.  Abraham is getting his hands bandaged.

Later that night, with Abraham on watch, Glenn comes and they have a conversation about how he is as on board with the mission as Abraham is, and that he wouldn’t walk away, even after the bus fire.  Abraham talks about how killing has become easy, maybe too easy, as Glenn asks him to put away his knife.  As he leaves, we get a comic moment as he confesses his need for sleep and going to have sex with Rosita first.  Which Glenn says he didn’t need to know but he is cool with.

We then see Abraham and Rosita engaged in relations, as a very creepy Eugene watches from the Self-Help section.  Tara confronts him, and quickly moves the conversation in a different way, after Eugene confesses to watching.  She thanks him for saving her and trys to move him into recognizing that they are in this together.  And she talks about how he can learn how to have the edge needed in fights, just like she has had to learn it.  And out of the blue, Eugene confesses to sabotaging the van’s gas line with pieces of light bulbs back at the church.  His plan was that they would just be stopped, not for the accident.  Tara is shocked and digs to why he would do this.  He confesses to being certain that he thinks no one will welcome or protect him unless he can cure this zombie apocalypse.  Tara then tells him that he has it wrong, that the whole clan protects each other and that she will keep his secret.

Maggie and Glenn then have a sweet conversation about how this mission has helped them move past the base survival instinct into being a part of something larger and bigger.

In another Abraham flashback, we see him try and comfort his family, who are clearly a little bit terrified of him after seeing what he has done.

We then get Abraham and Rosita in a little bit of a heated argument about what to do next, as she is bandaging his wounds.  After the discussion of staying and sweeping for supplies, Abraham declares there is no need, as they have a ride with a 500 gallon tank of water: A fire truck. 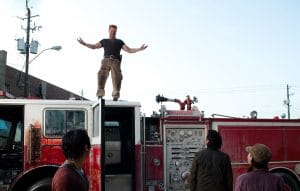 They get it cranked and it goes a couple feet.  Right then an ominous tire rolls by, coming from the door that the truck has been blocking.  After being schooled by Rosita on the mechanics of the truck, Abraham and all are then overwhelmed with a bunch of zombies from inside the fire department before Eugene turns the hose on them zombie horde.  (This is so weird, gross and gruesome, but it may be my favorite scene of this season so far.)  Abraham then laughs as the water clears the clutter revealing a warning graffiti and he starts preparing the fire truck to roll out.

The next flashback scene shows Abraham awaking, thinking he will find his wife beside him with their kids and instead sees a message that says he shouldn’t try to find them.  It really was heartbreaking to see this moment where what a man had become to save his family cost him their affection.

We then get to the firetruck which has stalled.  As it is being worked on, Eugene is reading a copy of HG Well’s The Shape of Things to Come, when Maggie sits for a chat.  She talks about how his hair is a cover, letting him be someone who stands out among the others in the lab.  She then talks about how he is nothing like Samson, dissecting a riddle Samson created that only he could know the answer to, because it was based on his own experiences of killing a lion and later finding its carcass filled with honeybees. A smell then hits the group.

Walking a little farther down the path, they come to a place where the horizon shows thousands of zombies in place, blocking the road and their path.  Glenn starts to walk away, talking of figuring out a different path, while Abraham talks about not giving up the ship to himself.  And then all hell breaks loose as Abraham says that they need to push forward, no matter what.  The discussion takes a weird turn when Abraham is dragging Eugene back towards the truck, with everyone coming to blows on the route.  It ends as Eugene loudly declares “I am not a scientist!” 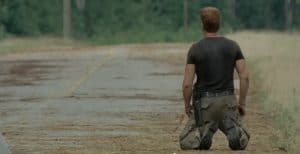 In that moment, the whole crew looks defeated.  The one hope they all had and have been willing to invest themselves in turns out to be a fraud.  Eugene does say he knows things but is not a scientist and he thought the only way to get to DC, where he does think there is the best chance of survival was to trick people.  He knows the costs, listing off the names of people who died to try and get him to this point, in response to Tara questioning him about it.  Just as he starts to remind everyone how much smarter he is than they are, Abraham unleashes on him before Glenn can intervene.  Eugene is battered, unconcious, possibly dead as Abraham walks away before falling to his knees, his hands again bloodied.

In the last flashback, we see Abraham find the bodies of his wife and children.  And in that moment, he is choosing to end his own life when Eugene arrives.  After saving Eugene, he is walking away when Eugene declares that he needs help because he is on an important mission.
Some thoughts: