As we head into this coming Sunday’s debut of the seventh season of the AMC hit show, The Walking Dead, there are some thing that you need to do to prepare yourself.

How to Prepare for The Walking Dead Season 7

Get the bad taste of the season six finale out of your mouths. After having built up an epic climax with new villain Negan, the showrunners and director made the choice to end the season without revealing who among Team Rick gets baseball batted to death. It was, to be honest, a terrible, horrible ending to a season that had very faux-reveals, including Glenn’s campsite under a dumpster.

Decide who you think is going to be the person that dies. This past week, showrunner Scott Gimple assured everyone that they are not going to yank around the audience and we will know by the end of the episode who dies at the hand of Negan. With that in mind, you need to get a theory and be able to justify it. This week’s Slackchat is going to be an all-hands on deck chat where everyone throws out their favorite theory. 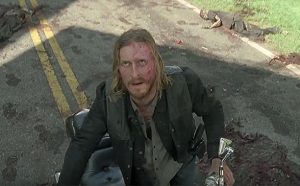 Stay away from spoilers. Any time we head into a new season of The Walking Dead, you get lots of spoilers, theories, etc. in particular from those who have read all the comics and graphic novels. The show and the comic have a similar path but not a completely identical one. (For instance, the tragic death of Doctor Denise in season 6 is actually the way Abraham dies in the comics.) Do your best to get it pure for yourself and everyone else. If you want to read ahead, feel free to do so. Just don’t wreck it for the rest of us.

Ignore Fear the Walking Dead. Though Nerds on Earth writer Joseph has stayed current on the show, no one else has really and, for good reason. Season one didn’t interest me and until I hear that Tobias has come back to kick butt and take names, I ain’t interested.

Remind yourself what it is like to wait week to week for a show again. Seriously, after a summer and early fall of binge watching my way through several shows, I need to readily prepare myself for that feeling of being desperate to know what happens next but not being able to know. And mid-season finale is even worse! (The schedule currently looks like it will run from next week’s start until December 11th, before resuming in time for a romantic zombie night on February 12th. It should be noted, that they have changed the schedule in the past to avoid things like Thanksgiving Weekend.) 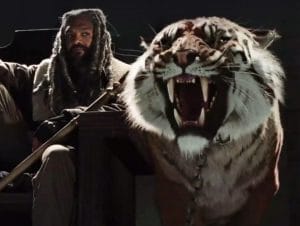 Think about what is going to come next. If Negan’s speech told us anything in the season six finale, it was that he has no intention of killing them all or putting them all in prison. His plan is simpler: he will live large off the “tax” he charges them for the hard work they have to do to survive and live. How will all the characters deal with that change? Are we headed for a dreary season of everyone just toiling away with regrets after a shocking season opening death? And what happens to Morgan and Carol, who are some of the few that aren’t tied up in this Negan incident? And what is with the tiger that has been a part of some of the promos?

Are there going to be some new characters introduced? It feels like we had a influx of new people with the arrival at Alexandria, and since then, we have seen a pretty steady thinning of that group without major plot developments. Could this be the season to add some new folks and keep them around long enough for us to develop some kind of attachment? I think it should be but we will see.

Look up your cable television phone number. Remember, it is simple: if they kill Daryl, we all cancel cable. Immediately. The voices of the people have to be heard.

The Walking Dead and Game of Thrones: The Problem with…