In the course of the last season or two of The Walking Dead and Game of Thrones, we all watched as the writers and creators stumbled into a dilemma that has significant consequences for the shows moving forward. With what happened with Glenn in The Walking Dead and Jon Snow in Game of Thrones, two shows that majored on unpredictable plot lines that led to major characters’ deaths suddenly created a new class of characters: The Untouchable Characters.

Untouchable Characters: The Set Up

The Walking Dead has so many people and things die per episode that their side project show about a show, The Talking Dead, has a segment that is dedicated to all the people and zombies that die on each episode. Over the course of the seasons, we have seen major, significant characters, both good and bad, die some horrible death. And the random nature of those deaths made the audience feel that this axiom was true: anyone could die.

And it is part of what drove the show into the peak position it has today. It may be the last truly great American watercooler television show, where everyone gathers around in the morning and asks each other if they saw it and what they think about it. 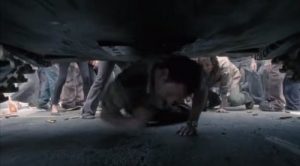 Likewise, at the end of the previous season of Game of Thrones, one of the major characters, Jon Snow, met an untimely death, when he was murdered by some of his fellow Night’s Watch, who were convinced that he had betrayed them when he negotiated an alliance with the people outside the wall. After an entire off-season of speculation, where nearly everyone agreed he couldn’t be dead permanently, Jon Snow was resurrected. And, again, a show that had built its success in part to the random and crazy nature of deaths (See: Ned Stark in season 1), suddenly had an untouchable, unkillable character.

In both cases, the change has made the show more predictable.

The season ending cliffhanger of this season’s Walking Dead was with Negan, the new Big Bad of the show, threatening most of the regular characters of the show who have been captured. When we finally see Negan swing away with his baseball bat, we don’t see who it is on the other end of it. Cut to black. 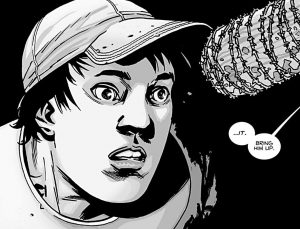 And, the very first thing I said, “Well, we know it isn’t Glenn.” Now, it should be known if you read the comics or have friends who have, Glenn is exactly who dies in this scene in the comics. But because of what happened earlier in the season, it is pretty clear that, at least for now, Glen is untouchable; the random, haphazard nature of zombie deaths is going to skip right over the soon-to-be-a-dad Glen.

And once you make Glen untouchable, then other characters become the same. Rick won’t die. Carl lost his eye but he won’t lose his life. Daryl is the favorite of too many fans. Maggie is pregnant. A show with a reputation of less than charitably treating minority characters isn’t suddenly going to off Michonne, who is likely in the top 3 of fan favorites.

And that shift makes the show different. Before Glenn this season, I would have made the argument that the only one who was untouchable was Rick, and I would have made it halfheartedly. While the comic has centered on Rick since day one, like the show, the show has shown enough willingness to veer hard from the course of the comics when it wanted to. And, honestly, that meant Rick was one good contract dispute away from a zombie death.

Likewise, after his resurrection, Jon Snow felt and became untouchable. The scene where he rides out 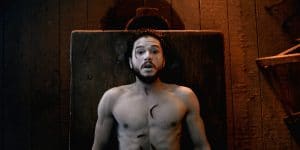 to try and save his half brother from the arrows of the horrible Ramsey Bolton is a moving one; a brother running out into the middle of a battlefield to save his brother, and is then alone when the army charges him. It is a powerful scene and maybe one of the best scenes of this season of television. I have a screen captured image of Snow drawing his sword at that exact moment of the Battle of the Bastards.

But Snow was never in any real danger. Even as we see a moving depiction of gruesome medieval battle, when Snow is nearly suffocated among dead bodies, as the other army crushes in against him, the audience again doesn’t believe that he will meet his end at that battle, on that day or in that episode.

And when you make an untouchable character of Jon Snow, then you begin to think that they surely won’t kill Daenerys and her dragons, or Tyrion, who you can argue now plays the most pivotable role. And when this happens, you lose options, and that limits your storytelling.

Untouchable characters aren’t new. Lots of shows have built upon the premise that at least one character is the central focal point. But in the case of these two shows, the hype and shock of the machine was built on the idea that anyone could die at any moment. And when you remove that from the potential story, it makes the shows more predictable, and potentially, less interesting.