Comic Characters You Should Know: Who is Negan From The Walking Dead

I promised my mother I wouldn’t curse. Well, that might prove difficult in trying to answer the question, “Who is Negan From The Walking Dead?” But Negan being introduced on the television have left many curious, so read on and I’ll try my best. (Careful, I’ll be spoiling the bejeebers out of the comics.)

Who is Negan from The Walking Dead? 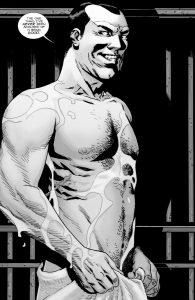 Negan was introduced in issue #100 in the Something to Fear storyline, with an appearance modeled after Henry Rollins. He is the leader of the Saviors, a group of about 50 strong who base out of an abandoned factory not too far from Alexandria. Negan and his goons extort nearby communities of survivors, using the threat of violence to take half of their supplies.

While I’ll briefly mention some of Negan’s more interesting storylines, let’s first focus on his personality. Negan is brutal and has a twisted sense of humor. And he is foul-mouthed to the extent that it makes you question how Robert Kirkman was raised.

Negan is both feared as a leader, and also respected for the efficiency in which he handles things. Unlike the Governor, who had the tendencies of a psychopath and was prone to emotional outbursts, Negan genuinely seems to enjoy a contest of wills. When Negan says “let’s talk so we can come to an understanding,” it’s not a stalling tactic, it’s said with the utmost of sincerity. He shows himself to be quite reasonable when people attempt to negotiate with him, but it is 100% certain that Negan will enforce all terms if necessary by bashing in a skull with Lucille, his baseball bat that he wrapped in barbed wire.

Negan is merciless and unrelenting when it comes to getting a point across, but at the same time he is willing to spare those he sees as potentially useful, and has shown that despite his brutality, he isn’t looking for anarchy as much as total control. Negan is as charismatic as he is savage.

Four moments from the comics illustrate this (careful, as the TV show closely mirror the comics, these are potential spoilers): 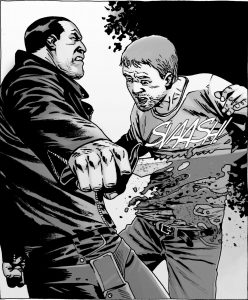 #1 In his first meeting with Rick and company, Negan lined up Alexandria survivors and declared that everything that belonged to Alexandria, now belonged to the Saviors. Then he chose a victim by going eenie-meanie-miney-moe and smashed in the victim’s skull with Lucille. He felt it was important to establish a first impression.

#2 Later, Negan rubbed the earlier execution in Rick’s face by forcing Rick to hold Lucille while he had his run of Alexandria. As Negan departed, he retrieved Lucille from Rick and whispered, “I just slid my díç& down your throat, and you thanked me for it.”

#3 When Carl infiltrated the Saviors base, Negan took an interest in getting to know the kid, rather than outright kill him. Negan orders Carl to remove the bandages over his eye, showing interest in seeing the injury. Negan jokingly mocks the injury and asks Carl if he can touch the part of his skull that was showing through his exposed eye-socket. This causes Carl to break finally and cry, and Negan actually is taken aback and apologies.

#4 When Negan arrives at Alexandria a few days ahead of his typically scheduled shakedown for supplies, he’s informed that the community is out of supplies and that Rick went out looking for more. Spencer betrays Rick and tells Negan that Rick is not a suitable leader and asks to be given control over Alexandria. Negan is insulted that Spencer would wait until Rick is gone to tell him this and responds by saying that at least Rick “has guts.” Negan then slashes Spencer’s stomach killing him, remarking that, hey, he had guts after all, then orders the mess cleaned up before a kid could see it.

I suspect that Negan–even as the villain of the show–will quickly become a fan-favorite character. At that point I’ll totally make Jeffrey Dean Morgan a t-shirt that says as much, then he’ll wear it around the set and his co-stars will will grumble and say ‘awww man’ because they’ll wish they had one. In fact,  The Geek Room listed Negan as #1 on their list of Best Walking Dead Characters to Bring to TV, saying:

The Governor has nothing on Negan.

So, there. No reason to further elaborate on that.

Who is Negan from The Walking Dead?: Final Thoughts 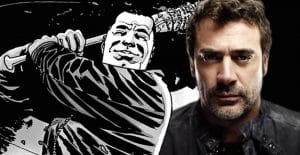 The comic book storylines that involve Negan are unquestionably some of the best the series has to offer. He’s both a fascinating and a repulsive character.

What’s more, Negan has a 50+ issue run in the comics, so it’s highly plausible that his storylines could easily fill the next two seasons of the television show. You can find Negan’s first comic appearance here. Read it. It’s amazing.

And here’s a look at Jesus, another excellent new character who has come to the Walking Dead television show.

The Walking Dead Episode 609 Recap and Review: No Way Out