Its nearing midnight, and a surprising number of people are milling about the Stuffer Shack (a futuristic 7:11) – most notably a couple in the midst of some serious PDA and a mother trying to console a screaming infant. The mother and child pay for their goods, exit, and then return exclaiming that they forgot an item on their shopping list.

An explosion just outside the front of the building buries the mother and child in debris.  Three men enter through the cloud of dust and announce that they’re looking for a mom and her babe. One of the shoppers immediately goes on the offensive. He draws a concealed pistol and fires twice, but misses both shots. In response, the hostiles return fire.

A few more shots are fired from both sides. Bullets split

the air, but find no targets in the haze of debris and smoke. Suddenly, one of the patrons pierces the veil and lands a haymaker on the foremost aggressor with one of his two cybernetically enhanced arms. The same aggressor is then struck by a bullet, dead.

And then all of the lights go out.

The one who threw the punch then throws the dead body at the remaining intruders. As others set to work removing the debris from the woman and her child, a concussive jab from his cybernetic arms dwindle the attackers’ number to one. As the remaining assailant is submitted by another patron, yet another person arrives on the scene – rushing (seemingly) to the aide of the aggressors. A slender and elusive elf slides up behind the new perpetrator, brandishing two guns and demanding he put his hands up and remain still.

Pan to the left from the action and its resolve to find one of the shoppers watching almost peaceably as he munches some popcorn. [Editor’s note: a PC really did use his turn to watch the ensuing scene while eating popcorn]

As the dust settles, names are demanded and given and the investigation begins. Who are this woman and her child? Why would anyone want them dead? That remains to be seen, but the confrontation may just prove a sufficient enough inciting incident to bring together six folks who otherwise would have simply gone their own ways with Big Gulps in hand.

After my gaming group’s Dungeons and Dragons TPK, we decided to give something else a try. It wasn’t that we were suddenly jaded with D&D, we just wanted to create an appropriate moment of silence for our now dead characters.

One among our group presented Shadowrun as an option and said he’d GM for us. It took us awhile to get our new characters together, but we finally sat down around a table in front of a GM screen and to a whole mess of d6s to give this new world a whirl.

The narrative above unfolded over the course of about an hour and a half. We progressed slowly as the mechanics are nearly all new to us, but we got a taste for the gameplay…and we loved it!

This little arc is only the beginning, and were it not for such bothers as school and work we’d have plowed onward and forward.  We can’t wait to visit the world again, and here are a few reasons why. 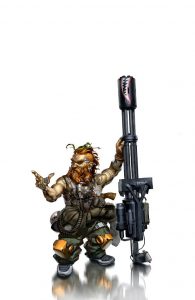 “CHAR dwarf” by WIDESHOT-DESIGN on DeviantArt.com

The character creation process allows for a ton of variance.  You can be, do, and know almost literally whatever you want.

I’ve gushed over the character creation process previously, but it hit home particularly strongly when, during play, we’d find ourselves going, “Huh, you can do that?”  When you play D&D, you’re not surprised when the rogue is sneaky. In Shadowrun, you are surprised when the non-augmented character has a super-high intimidation roll.

My character, Braxxus, isn’t the most physically daunting, but I wanted him to present as intimidating…ergo he is.  Who says you have to be jacked and have two cybernetic arms to scare people to the point of peeing their pants (and yes, that totally happened)?

The digital aspect of the Shadowrun world opens up a whole new can of possibility. One of our group accessed the matrix during combat (what?!) and managed to turn off the lights in the building without hitting a single switch (get out of here!). He knew half of our group had lowlight vision and he leveraged that against our foes with a thought. That is stinking cool.

The same character later ended up using his Google-fu to take an email address and turn it into a fairly complete bio of its owner (as well as a couple bios of other names that cropped up during his initial search).

You play using a pool of d6s determined by your Ability scores and your Skills. No modifiers at all; you just roll the requisite number of d6s, count up the 5s and 6s to determine the number of your hits (to be opposed by the hits of enemies, of course), make sure the number of 1s doesn’t equal half of your dice pool (or worse, you have 1s and no 5s or 6s), and you’re golden. There’s even a nifty app that rolls digital dice and presents you with your hit count. Trust me: The app is the superior option when you have to roll 15 d6s (and yes, that too totally happened).

Initiative is super interesting in the game. You roll it upon entering combat as usual, and when you reach the end you cycle back to the top…only everyone’s initial initiative has 10 subtracted from it and only positive numbers are allowed another turn during this round. For instance:  I rolled an 11 initiative.  11 – 10 = 1, which meant I got to take two turns during the first round of combat – but just barely. Those that rolled 10 or lower (enemies and PCs alike) were done. Those that rolled 21 or higher got to act three times during this first round.  When everyone’s initiative (less 10) equals 0, you reroll initiative. So you’re not necessarily stuck at the bottom of the lineup if you roll poorly! Very cool. And there are all sorts of augmentations you can buy that will boost the number of d6 you get to roll in order to determine your initiative.

Shadowrun First Impressions: All in Favor

We unanimously enjoyed our first Shadowrun experience. Even though you’re only rolling d6s, the learning curve is still very much present, but that is true of any first-time experience with a game. With gear and augmentations affecting the number of dice in your pool for any given test, there is plenty to keep up with, but man if it isn’t fun!

I’m not going to lie:  My vote was cast for continuing with D&D. But on this side of the Stuffer Shack, I 100% believe we made the right decision. It’s not that Shadowrun is better than D&D per se. It is just different. And we could all use a little different every now and again.

Comic Characters You Should Know: Who is Negan From The Walking Dead

7 Nerdy Things You Need in Your Life: Sam’s Shelfie

A Primer on Shadowrun, a Great Non-Fantasy RPG

A Primer on Shadowrun, a Great Non-Fantasy RPG