The Shadowrun world has sparked my interest. However, reading about it just isn’t going to scratch my itch. I want to walk the streets, see the sites, and fight the fights!  But in order to do so, I’ve got to build myself a character.

The first thing the Core Rulebook suggests you do: Envision your character. What do you want them to be like and do? For me: I choose to head in the non-augmented direction.

My character, Braxxus, is a purist. He knows augmentations permit all sorts of sweet buffs and abilities, but he sees them as cheating. He prides himself on his natural ability, not abilities he bought. He has no problem running with “augies” (that’s what he calls them), but he won’t become one.

I also decided going in that he would be the best lock-picker around. I hate it when I’m playing a game and come across a locked room or chest that I can’t access. What sweet loot lies beyond my grasp?! Braxxus won’t suffer such anxieties; at least not often.

Oh, and he would favor the sword and the gun. He’ll prefer the stealth option, but if loud bangs are called for or encountered, he will be far from useless.

Step two: Choose your metatype, which is the Shadowrun equivalent of D&D’s races. Braxxus is an elf because they have a higher natural Agility limit than the other options, and Agility is the attribute important for sneaking and locksmithing.

Now comes the fun part: assigning priorities! The flexibility inherent in Shadowrun‘s character creation system is pretty fantastic. Instead of rolling for stats, you assign one of each of the following options (A-E) to Metatype, Attributes, Magic & Resonance, Skills, and Resources.

Want a ton of money for gear? Priority A grants you a wallet with 450,000 nuyen. Not into the whole magic scene? Assign it Priority E – the one that gives no magic or resonance points anyway – to avoid wasting a higher Priority on stats you won’t even use. 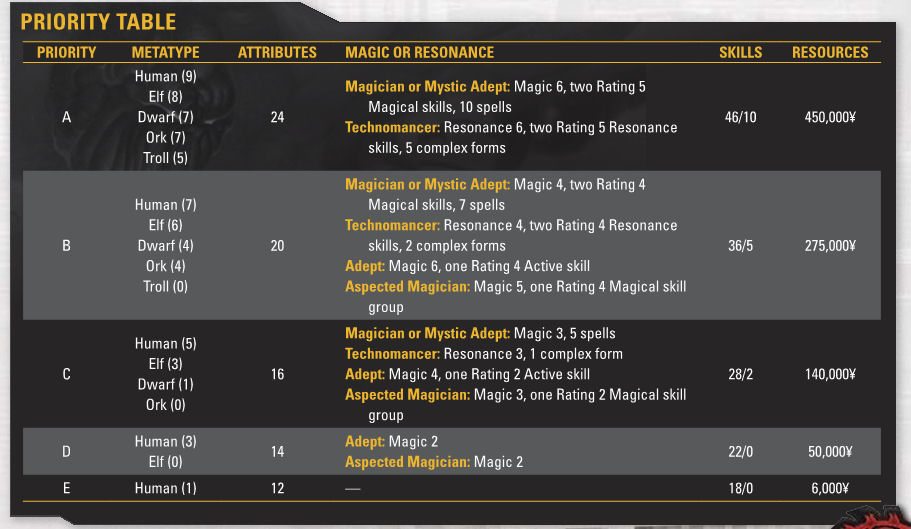 My amateur advice at this point: Read ahead.  450,000 nuyen sounds awesome, but do you even need that much for the gear you want? Make a list, add the nuyen, and assign the most appropriate Priority given your shopping list. Going the non-augmented route, I had a hard time spending 50,000 nuyen.  It will get a fairly low Priority. And just how many different skills are you looking to have out the gate? If they are relatively few in number, consider giving it a lower Priority and buffing your character’s Metatype or Attributes instead.

Priority A goes to Skills. Hands down. Without the need for so much cash, I can splurge on abilities. 46 points to spend on individual Skills and 10 to spend on Group Skills. Each level of a Skill costs 1 point, and the higher the skill, the better your odds during skill tests (duh). And during character creation, the highest level you can purchase is a 6. I bought a lot of 6s. Braxxus’ Skills:

No Magic or Resonance for Braxxus. He’s old school.

Priority B goes to my Metatype, granting me (an elf) 6 points to spend on Edge or Magic and Resonance. Since I’m not using Magic or Resonance, all 6 points go to my Edge. Edge is pretty useful stuff. You can spend a single point – to be regained after a big meal and a good night’s sleep (8 hours or more) or awarded like a prize for awesomeness by the GM – to give you a buff during tests, re-roll dice, move to the top of the initiative order, negate a glitch (think a crit fail), and more. Or you can burn a point of edge (it is gone permanently) to automatically succeed on a test or even prevent what should be unavoidable death.

Braxxus starts with an Edge rating of 1 and a max of 6, so at a glance it seems like I’m wasting a point…but I have a trick up my sleeve to grant my elf a full 7/7, baby!  Just you wait.

Priority C will be mined for its Attribute points, giving me 16 to apply to Body, Agility, Reaction, Strength, Willpower, Logic, Intuition, and Charisma. 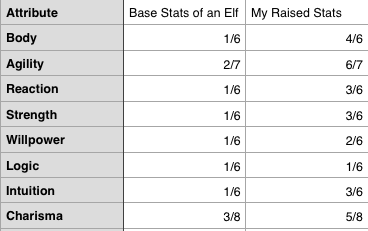 Agility and Charisma boost a ton of my skills:  Locksmith, Escape Artist, Palming, Sneaking, Con, and Intimidation. I also boosted Body because I don’t want to die too easily, Strength to help with my katana attacks, and Intuition because it plays a big role in Perception, and I want to be very vigilant.

Priority D gives me 50,000 nuyen for gear, which I won’t list here but includes guns, ammo, armor, a katana, and just about every lock picking device there is at high level. Have I impressed upon you enough that I want to pick all the locks?

Priority E goes to Magic and Resonance since I’m not using any and it grants no boosts to them anyway.

The final step involves spending 25 Karma Points to buy Qualities. You can keep up to 7 Karma for use in the game in a number of ways, but I spent all 25 of mine like this:

You also have the option of taking on Negative Qualities, which grant you additional Karma to spend but come with boons and debuffs.  I didn’t bother with that this go around, but maybe in future builds.

And there you have Braxxus in all his glory. All I’ve left to do is draft his backstory!

I really dig the Priority Table approach to the character build. It really made me put a lot of time and thought into how I wanted Braxxus to end up; particularly when it came to his Skills. I’ll likely build a couple more characters out before deciding who I’ll take to the streets with, but Braxxus is a strong start.

Weekly Nerd Chat: What are the Best Nerdy Holiday Movie Releases of All Time?

The Dark Lord or the Mad Titan: Surveying the Rising Games…