In preparation for the Force Awakens coming out, I have been revisiting the prequels (while also avoiding any and every spoiler possible.)

Here is my greatest realization: the prequels change the hero who is the focus.

When you start watching the original six movies in the sequence they were released, most people are immediately drawn to Luke. And through the original three movies, Luke goes on the classic hero’s journey of discovered, of growth and arrival. That path over the course of those three movies is completely valid. And the prequels retcon it all.

The prequels turn the focus not just of those three movies but the ones that precede them. And the new hero is…Anakin. It seems in some way to ridiculous to claim that Darth Vader is the hero of the whole series. He murders people, he attacks the Jedis, and he serves the big evil Empire. But the key to this idea is this: his journey takes a gigantic pause from the end of the Revenge of the Sith and the end of Return of the Jedi.

From the introduction of Anakin the Phantom Menace, he is talked about in messianic ways. Remember how his midichlorians are off the chart? Remember how everyone thinks that he will bring balance to the Force? A key element to the series working the Hero’s Journey across all is the idea of the Chosen. Anakin is the Chosen One. 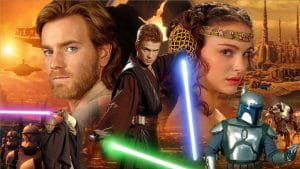 Over the course of the next two movies, we see Anakin grow and advance. He gets powerful. His training makes Anakin stronger in the physical world, even as he surpasses the people who trained him in the physical battle realm. Over much of last movie, he defeats everything that he faces superbly…except his emotions. And when Anakin cannot overcome those emotions, it starts a long deep descent into the madness that overwhelms him for nearly all of the first three movies.

The switch and culmination of Anakin’s journey is pretty obvious. At the end of Return of the Jedi, Vader turns on the Emperor. In the midst of that battle, he does two things: he kills the Emperor, saving his son, and he is mortally wounded himself. In what is by then a much unexpected way, Anakin does manage to bring balance to the Force. And as he is dying, it isn’t unimportant that he has his mask removed, casting off the evil he did as Vader and returning to being Anakin, the hero whose journey started way back in the prequels.

So why does it matter? George Lucas fairly gets a lot of grief for the second set of movies. They are a plotting mess, they are full of characters that many hardcore fans hate and they aren’t, in many ways, good movies. But he deserves some credit in that he manages to retcon his own movies, shifting what had been the Big Bad of his galaxy far, far away into a hero. If anything, it elevates the end of Return of Jedi.

Who will be the new hero of Star Wars?

So what will happen in the new movies? Here are some of my thoughts from a completely spoiler-free existence: