For about a season and half the craziest phenomena has been happening in the Walking Dead. More and more we are seeing “Rick hate.” People essentially are thinking that Rick has gone into “villain territory.”

Sure, there have been some moments that have lead to the masses jumping ship from Team Rick: 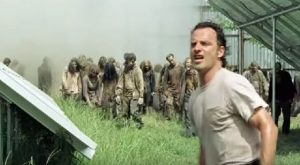 Despite all of these questionable acts, Rick does everything for the protection of his group, and news flash, his group is still here! Mostly.

He has even continued to take on outsiders along the way. Do we remember Slab Town? Sure Rick has some moments, but overall he is a good leader. More importantly, he is the right leader for our group in the Walking Dead.

The working title of this post is “Why I’m still on Team Rick.” It really should be called “Why Morgan sucks and anyone on Team Morgan is just a sap!” Rick is a true leader because leaders have to do what is best for the group, NOT what makes you feel warm and fuzzy inside.

In any college level ethics class the students will be faced with this type of scenario:

Essentially the dilemma is that if you do nothing, you passively account for the death of 5 people. Or you can actively kill 1 while saving the 5. Which do you choose? 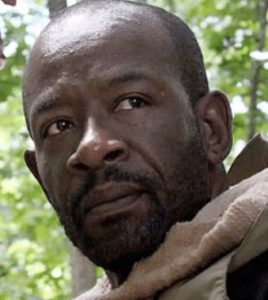 Well if Morgan was faced with the decision, he would try to bow staff the train off the rails and spare everyone because, “all life is precious.” Or he would just end up allowing the 5 to die because he would not bring himself to actively take the 1 life.

In the past half season we have seen Morgan spare the 2 lead wolves who eventually led their gang to Alexandria and caused a slaughter of many. Morgan also let 5 wolves run off who almost snuck up on Rick and took him out. He also took one of the lead wolves hostage and was going to try to rehabilitate him like the cheese maker did with him. That wolf got out and took the new doctor hostage. All in all, Morgan has accounted for at least a dozen deaths because of his “all life is precious” mantra.

Taking the same ethical dilemma, Rick, on the other hand, would likely assess the situation: are the 5 simple Alexandrians who are “going to die anyway”? And is the 1 one of his own? Sorry 5, you are gone. Unless Jessie is part of the 5.

Sure, Rick picks favorites, but hasn’t he earned the right after five seasons of leading the group? While some might assert that Rick is a little too quick on the trigger these days. I mean he didn’t even flinch where Deanna gave him the go ahead to kill Jessie’s husband. Rick knows what they are up against, Terminus, Slab Town, and Woodbury are nothing compared to what we saw with the Wolves.

Now we have this new threat, Negan, to worry about. If our group is to survive it is going to be with the guidance of Rick and not with the beloved Morgan’s peace revolution. So mark me down as #TeamRick all the way!

How to prepare Yourself for Star Wars Episode VII: The Force Awakens