I’m not a hardcore gamer. I don’t own a console and growing up I played only a few games, mostly the classics. However, I certainly have gotten into gaming on my phone and with some many options for our mobile devices, it is a pretty easy way to become a pseudo-gamer.

I have always appreciated pocket game devices, and was totally into Pokémon on Game Boy back in the day. I have played Clash of Clans, Boom Beach, and the like, but the game I am absolutely into right now is The Walking Dead: No Man’s Land. This game is perfect for during TWD off-season especially with the long wait we have to find out who got Lucilled.

Speaking of Lucille, you can take missions against Negan and his Saviors in No Man’s Land, which is great for taking out some pent up rage from the #WorstCliffhangerEver. 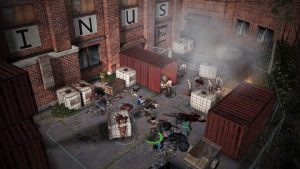 I just started playing the game after the season finale, so I am not sure if fighting Negan has always been an option (as it appears the game certainly gives itself room to expand its universe). I am also a show first and comic second for TWD, so I am not sure if the game has spoilers when it talks about the pending threat of the “free men.” I can’t wait to find out though.

No Man’s Land starts with Daryl helping a few captives escape Terminus. The whole group makes a run for it, and Daryl helps them establish a camp. He also pops up from time to time, but you are mostly lead around by characters introduced in the game.

You take on missions to collect a variety of points: supplies, experience points, gold, and trade goods.   All of which are used to help build up your camp and characters, as well as get you useful gear. 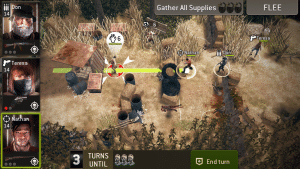 The game is a standard turned based RPG (role playing game not rocket propelled grenade). You typically run a team of 3 characters and if a mission starts with only 2, you are going to find someone who will join you for the rest of said mission.

As the game progresses you grow your team, establish an outpost which you need to leave a few members to defend. I’ll get into a little strategy a bit later.  You also gain a variety of character types:
Scout – Weapons: melee (small): knives/pipes

Strength: higher health; can take out or stun large groups of threats
Weakness: does not often deliver deadly blows in one turn; limited movement range

Strength: good against tight packs; can gain an extra attack
Weakness: lower health; must advance into game a while before unlocked

Strength: great in a crowd; can kill and/or stun many threats
Weakness: limited movement; lower health

Understanding the strengths and weaknesses of each character class is key to assembling a good team, both for missions and to defend your outpost.

Defending your outpost is best with a couple range characters and a bruiser in my opinion. You also should be mindful about who you stash in your outpost because they cannot be easily switched to take on a new character.

At various times you can call out for new characters to join your camp or you encounter them on missions. If your character slots are full you will need to retire a player. So it is best to stash your highest ceiling characters in your outpost so they will remain there. You can change out your lower ceiling for the higher ceiling characters as they come to your camp.

A word about character ranges. The first three characters you begin with max out at level 3 so drop them as quickly as possible. Most other characters range up to 7 – 13 (as far as I have seen so far). So also be mindful about who you upgrade and when. If you can upgrade few players choose the ones with the highest ceiling first because you may drop the lower ceiling players as you go.

When assembling your mission team it is key to pay attention to descriptions of the missions so you know to use range weapons or silent weapons to keep the extra number of walkers down. I personally think it is always best to use a variety character types: shooter, hunter, bruiser or bruiser, scout, assault etc. 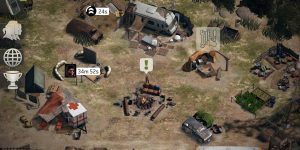 Overall I give The Walking Dead: No Man’s Land an 8.3 out of 10.0 Nerds. This is a free game to download, but there are in app purchases available. However, the nice thing is that you are not pressured to purchase and you can easily progress without purchasing. I have not and will not spend on the game because that would cut into my Lego budget.

It is a great game mobile game, but it is highly recommended to be connected to Wifi, so it’s not entirely mobile. It may not be enough for those hardcore gamers to take time out of their console gaming to play, but it is a really great time waster, it is perfect for those 20 minutes when you are waiting in line somewhere.

Weekly Nerd Chat: What Makes for a Great Sci-Fi or Fantasy Story?

How to Quickly and Easily Create D&D 5e NPCs