What follows is a recap and review The Walking Dead episode 616, the season 6 finale. But let’s just cut to the chase. 2 out of 10 nerds.

Much of this season has slowly been building towards this reveal of Jeffrey Dean Morgan’s portrayal of Negan, who is a functional warlord for all intents and purposes. The level of hype surrounding that has been unreal; I saw the actor talking about the role months ago on a mid-day ABC cooking show. For real. All of which contributes to the ending and the disappointment in the finale. It isn’t just that this is a slow moving, bloated episode of television, it is that it is all of that without any kind of pay-off. (Can we just agree that finales don’t have to have the extra 30 minutes?) 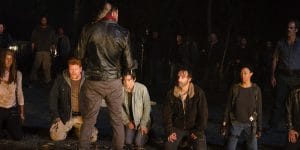 Carol and Morgan. Morgan continues to track down Carol and eventually finds her. And for the first time, we get a real sense of Carol’s struggle with what has been happening: she loves people and in order to defend them, she has to kill.

So her solution is to go solo again. In a strange way, she has embraced Morgan’s philosophy: she will defend herself and nothing and no one else. But Morgan talks of the value of caring for others, of those who she is deeply connected with.

It all culminates when Carol has been tracked down by a man she wounded at the roadside, shot twice and then Morgan kills the man defending Carol. My gut says that there is a lot more to the story that could have been developed over the back half of this season and it is really is an interesting point as both shift philosophies and pass somewhere in the middle, as Carol wants to run away and Morgan decides that defending people he loves is worth the karmic cost.

At the end, some men who are wearing motocross outfits like armor show up and agree to help Carol and Morgan.

The rest of the crew wind up needing to get Maggie to Hilltop where the doctor is. There is some argument about who is going and who is staying. That leads to Carl locking Enid in the closet and Gabriel making a vow to Rick to protect everyone and especially Judith.

As they drive to Hilltop, they keep running into roadblocks and groups of Negan’s followers. It happens repeatedly and really takes up the bulk of the episode. The music was foreboding and suspenseful which helped sell it but the story didn’t benefit from an hour of it. They all have the goal of getting Maggie to the Hilltop but their path is blocked.

We come to a great moment where Eugene basically says “They are chasing the RV now that it is dark. You all get out and take Maggie and I will be the decoy.” He knows what potentially will happen and he gives Rick the formula to make bullets and Eugene and Abraham have a bro-mance moment.

But in the end, they are all captured and brought to a point where they are lined up, put on their knees.  Clearly, the hubris of “We can handle anything” that Rick and company have embraced this season is coming back to haunt them. They are stuck. Maybe 50 people are there and there is no chance of escape. 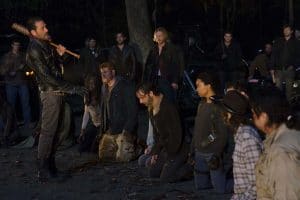 And Negan arrives. He gives a scene chewing speech about how he isn’t going to kill them all because he basically wants them to work and he will take half. As they are in the line, you have moments. He recognizes that Carl is Rick’s kid. Glenn rises up to potentially defend Maggie.

Then Negan says that someone will meet their end with Lucille, his barb wired covered baseball bat.  He plays a little game, lands on his victim and then the camera angle changes and we see the blood and splatter but we don’t know who it is.

The outrage over this ending is real. And having taken some time to think about it, it is a stellar cliffhanger for a week where we know that the reveal will happen in a week. It is an awful, abominable end of a season though. (I could go through the whole alphabet with words that describe my displeasure but the A words work fine.)

Here is why: it distrusts the audience. This show has become one of the most watched television shows on today. It has built a massive audience, launched a spin-off (that is atrocious) and even has created a new genre of post-show shows with the Talking Dead. And that approach felt way more like a desperate plea for another season of a low rated show. The reason the audience is frustrated is that it is a stunt; it isn’t storytelling.

The showrunner has gone on and defended the move, including on the Talking Dead, which means he knew it was going to be met with outrage. AMC doesn’t provide screeners for critics, so the number of people who saw the episode ahead of time had to be small and exclusive, and yet he came loaded to defend it.

His argument is that the moment will mark a change for Rick and by not showing it, they have set that story up. If that is what they wanted to do, then they should have filmed the scene showing the reaction of Rick and/or other people and not made it look like the cameraman was getting whacked.

So, a few thoughts: 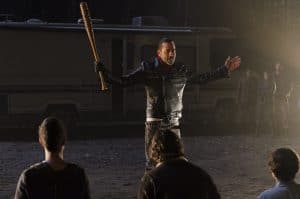 Process of elimination and weird plotting makes me think that the person getting killed is Abraham. (and I think there is a 90% chance the writers generally don’t know who is going to die and this was their way of delaying it.) He was too weirdly talkative and hopeful in his interaction with Sasha and Eugene. It feels like a set-up, a la Denise’s speech before her death.

Carol and Morgan stuff has some staying power that I think could be worth them investing some thoughtful scenes into.

Glenn and the dumpster wrecked everything. There is now a tier of characters who can be killed and characters who can’t. That makes storytelling from this point forward really hard to do. The suspense of the show was that everyone but Rick could potentially die and they have cost themselves that with that silly dumpster scene.

This show was one of the best on television. I would hold parts of season 5 and 6 up against anything being made today. But, it is also really uneven and can be epically awful. The back half of this season had me flummoxed and angry and sad.

Will I watch season 7? Most likely. But it will be a hope that they can turn it around, and the back half of this season made that hope dwindle more and more.