The season 7 premiere of The Walking Dead depicted a brutal double murder that was shown in grisly detail.

The show’s ratings showed a noticeable drop after that episode as many viewers felt like it was just too much. The writers on the other hand were congratulating themselves on pushing the line further and further on what types of gruesome displays of gore and violence they could show on TV.

Then reports got as muddled as Rick Grimes Southern accent. One Walking Dead producer said they dialed back the violence in subsequent episodes, due solely to the fan feedback they received. But other executive producers directly contradicted that statement, saying that the decrease in violence had been planned all along and was not at all the result of fan discomfort with the season premiere.

I don’t know what is going on among the producers, but I am a Walking Dead comic reader from the very start, so I know that the comics can get even more stomach turning than even the TV show. Here are 7 times that the Walking Dead comic was too controversial for even the AMC television producers.

Warning, MAJOR SPOILERS are possible, as some the show could always loop back to early storylines and some of the comic moments are out in front of the television show. A second warning, this post is GRAPHIC. Seriously, it’s REALLY GRAPHIC.

7. The Hunters eating their own children in Walking Dead #65. The television show remixed many of the elements surrounding Hunters, turning it into the Terminus storyline. And the show showed the Terminus gang as cannibals, with Bob being a victim. Everyone remembers Bob yelling, “Tainted meat!”

In the comics, the group was the Hunters and Dale was their victim. But what was chilling about the comics was a sequence when Rick questioned the Hunters on what brought them so low as to resort to cannibalism. They replied that if a bear would get hungry it would result to eating it’s own cubs. Well, the Hunters explained that when they got hungry…they ate their own children!

6. The suicide pact of issue #14. It didn’t take many issues for The Walking Dead to establish that it was going to oft-times be an emotionally difficult read. In fact, I’ll share three such moments in rapid succession, none of which made it into the television show.

During the time that the gang was staying at the prison, Julie and Chris were having sex, and committed to shooting each other in a suicide pact. After hearing a gunshot, Rick runs in to find Tyrese cradling his dead daughter’s body as Chris confessed that they were supposed to kill each other at the same time!

Julie then turns and tries to bite her father. Tyrese, in a fit of rage, chokes Chris to death and they realize that they don’t need to be bitten to turn.

5. The Greene Girls are shown headless in issue #15. The big reveal of season two of the television show was the emergence of Sophia out of the barn as a walker. Maggie and Beth are Hershel’s daughters on the TV show, while they were Maggie, Susie, and Rachel in the comics.

Glenn and Maggie find a barbershop in the prison. So they have sex and give themselves a little haircut, as one does. Later, Susie and Rachel go to the barbershop to cut their hair too, which is in no way a euphemism.

Hershel goes to search for Susie and Rachel, finding the horror of the decapitated heads of his twin daughters. They had been murdered by one of the old prison inmates.

Carol and Tyreese are a couple in the comic, but things go awry when Michonne is introduced. Carol tries to brush off Tyreese and Michonne’s friendship until she witnesses Michonne and Tyreese in a sexual act.

Soon after Carol’s break-up with Tyrese, her mental instability escalated to the point where she cut her wrist in front of her terrified daughter Sophia. Soon after this incident, Carol became desperate for companionship and she felt that the Grimes’ were the only ones in the survivor group who offered her comfort.

3. The sexual assault of Michonne in issues #28-32. In issue #28, the Governor cuts Rick’s hand off with a knife, which is a very shocking development that isn’t on the television show. But the reason is that the special effects of removing the hand of a television show’s main character is too expensive and inconvenient.

But other developments from that comic arc also weren’t depicted on the television show, presumably because they’d push the line of what is permissible on TV. In the closing panels of the comic, the Governor has Michonne locked in a cell. He comes in and tells one of his flunkies to take off her pants, then tells him to leave.

In the television show, the Governor uses the threat of sexual assault to torture Maggie, but it was only a bluff. This was uncomfortable enough, but the comics has some truly gut-wrenchingly bleak stuff with Michonne over the next few issues.

2. The Governor’s toothless kiss of issue #43. Michonne had her revenge on the Governor, but not before comic readers came to find how further deranged he was. The television show showed the Governor’s fishtanks full of severed heads, as well has his turned daughter, Penny.

The comic takes this further. The Governor is shown pulling out the zombified Penny’s teeth and proceeds to give her a kiss on the mouth. He then throws up and says that he will get used to the taste.

Yeah, the whole thing was yucky on so many levels, so I’m glad they spared us on the television show.

1. The death of Judith in issue #48. In issue #48, the Governor has overrun the prison and Rick and Carl are running for their lives with Lori, who is holding baby Judith. 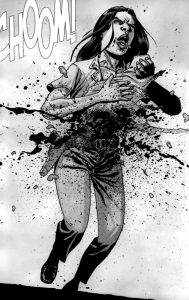 One of the Woodbury soldiers is commanded by The Governor to execute them. She obeys and shoots Lori in the back, not knowing she is carrying a baby. The gunshot kills Judith too, and Rick looks at his wife and daughter in shock. He then turns and yells at Carl to not look back and to just keep running.

Lilly then realizes that she has killed a baby and turns on the Governor, shooting him and tossing him toward approaching zombies.

After escaping the prison, Carl asks where his mother and Judith are. Rick starts to cry and tries to explain but he is overcome with grief.

The television show is typically over-the-line violent, but there is something about the death of a baby that I think they understand would bring a rightfully negative reaction from viewers.

Even though the television show sometimes skirted all around some of the above situations from the comics, they never quite took them to the line the comic book did. Honestly, I’m thankful for that.

Even as I was researching this last and remembering back the the comic stories I had read so many years ago, I realized that I didn’t recall any of them fondly. In fact, I with 100% certainty didn’t like how I felt after I read any of them, even if I very much enjoy The Walking Dead comic as a rule.

I guess that goes to show you there are lines we simply shouldn’t cross, even if it’s a comic book. Honestly, I don’t know how Robert Kirkman sleeps at night.