I just finished watching The Walking Dead episode 615 and my heart was so happy with the Easter egg I saw that it sent a joyous message to my brain. My brain then sent a message to my fingers, instructing them to smash keys, telling Walking Dead fans everywhere about this joyous Easter egg.

But SPOILERS ABOUND. Turn back, purists! Well, comic readers may proceed, as can those who watch with open anticipation, but those who don’t want Walking Dead season 7 spoilers will need to run away!!!

Seriously. I’m about to spoil the beans.

As Rick and Morgan were coming up to the farm they stumble upon an odd sight–a guy inquiring about his horse. Of course, Rick was ready to murder him, while Morgan was ready to talk to him, and the end result was him running away. But we caught several clues in that scene: 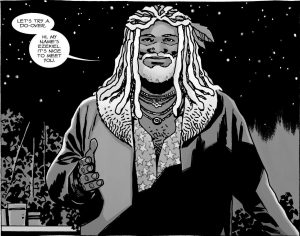 Comics readers will immediately recognize this adds up to one thing: Ezekiel and his Kingdom.

Those who travel on behalf of the Kingdom are known to travel on horses, wearing a sort of body armor. They fashion themselves as “knights.”

Looking Ahead to The Walking Dead Season 7

It was a quick scene this past week, and certainly one that could be overlooked, particularly as Morgan’s conversation with Rick was so jammed packed with implications on future episodes.

But don’t gloss over this quick scene as it holds tremendous implications for The Walking Dead season 7:

Morgan said in the episode: “Maybe he was just looking for his horse.” But we know that small scene has much bigger implications for The Walking Dead season 7!!