Jason (Co-founder of Nerds on Earth and stockholder of Wayne Enterprises) So it is impossible in nerd world this week to not have an opinion of what everyone is talking about. This stellar gem from DC Comics that has two of their greatest heroes partnered together to defeat the evil that wants to destroy them. But enough about last night’s sensational Supergirl and Flash crossover. We are here to talk about the box office winner for the weekend: Batman v Superman: Dawn of Justice. And here is the opening question: is it really that bad?

A brooding, plodding, self-important swirl of overt, clumsy symbolism, Freshman-level philosophy, and mind-numbing action.  But really, I can sum up my feelings for it in three words. So if, somehow, you haven’t seen BvS, let me be the one to tell you: Batman kills people.

On purpose, frequently, and without remorse.

Adkins (Co-founder of Nerds on Earth and highly skilled with a batarang) Have you read Snyder’s explanation of that?

Ross Yeah, some weak excuse where he says “Yeah, but Batman blew up buildings in Burton and Nolan’s movies, so it’s okay if we have Batman actually shoot a guy and blow him up,” right?

Adkins That was part of it. The funnier part to me is that he explains that Batman doesn’t, and I quote, “directly kill” anyone. Which to me read that Snyder wouldn’t consider Jigsaw from the ​Saw movie franchise a killer at all by that logic.

Ross Right!  And don’t try to tell me he doesn’t “directly kill anyone.” 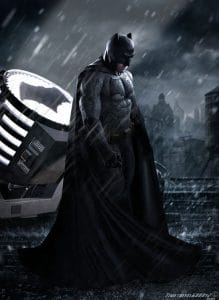 He shoots (BATMAN! SHOOTS! WITH A GUN!) a dude’s flamethrower tank! And then the guy explodes! That’s something Schwarzenegger would do!

That’s as direct a kill as possible!

Adkins HA! Snyder actually points to that scene specifically and says that yes, Batman shoots the tank, but the dude ignites the gas himself.

That’s the logic he has on record.

Jason At its heart, the issues are that the director doesn’t understand the nature of the characters. Batman and Marvel’s Punisher are essentially the same character. Marvel recognized that makes him a villain and put him in Daredevil respectively. DC tried to make him a hero and it fails.

Adkins You mean strictly in this movie, right?

Ross Wait, for clarity–are you saying that Snyder’s Batman is the Punisher, or the concept?

Jason Yes. The concept of what makes them tick is the same. Batman used to have boundaries and limits whereas Punisher didn’t. I feel like now, Frank Castle might be “That is a bit too far, Bruce.”

Ross I’m gonna go ahead and disagree with you there.

Batman is a creature of Justice, not Vengeance.

Much closer to Daredevil, in that regard.

In fact, I would say that the conflict between Daredevil and Punisher in Season 2 makes Daredevil a FAR better Batman than Ben Affleck

Jason In the long running comics that we love, you are absolutely right. In this movie, that isn’t what Batman is.

Ross I’ll drink to that.

Adkins I bet you already have!  I knew Ross would be the most flustered of us all when it came to this movie.

Jason So when you lose the heart, you lose everything but the costume and set pieces. And here is what I think the first great tragedy of this movie is: the hardest part of bringing these 2 characters to screen is casting. And I would submit that they found a good Superman and a good older Batman and are wasting them.

Ross I liked Cavill in Man of Steel–I didn’t think (and still don’t think) he and Amy Adams had a ton of chemistry, but I thought he did a good job. Here though, he’s so…wooden. He doesn’t DO anything.

Adkins Exactly. Not much is asked of Cavill as Superman in this movie.

Ross Aside from that quick montage, we never see Superman BE Superman.

Jason Yes! This movie is a Batman movie with a side of Superman thrown in until it goes crazy with the fight.

Ross He just stands around being very handsome and gloomy

Adkins I’m pretty sure “watch the news and look confused/sad” was fully half of his liner notes in the script.

Ross So that fight–I’ll allow it was definitely a high point, if only for the fact that it felt like it took 20 years to get there. But am I the only one who things the end was incredibly contrived?

Ross And, like, was he? Because maybe Lex Luthor was behind it?

Everything was weird, and rushed, and sloppy

Jason He turned on the light to bait Superman. That seemed to be immaterial of Luthor. Though both of them could use a good course on emotional intelligence. 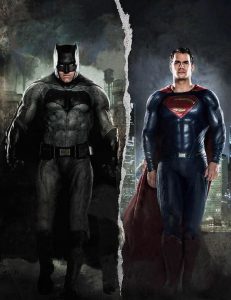 Ross The big flaw with so many “Let’s you and him fight” scenarios is that you have to find a way for two heroes who would normally be on the same side to be…well, not.

So can you explain to me what sort of mental condition has impaired Superman to such a degree that he couldn’t have just said, from the very beginning, “Lex Luthor has kidnapped my mother?”

Adkins Like I said in my review: Apparently Superman cannot fight and speak at the same time.

Jason I will say, I am all in on the very limited version of this Wonder Woman we saw. When she smirked after being hit by Doomsday, I was all in. And I think her movie is a smart idea. I already know more of the plot of it than I did this movie

Ross I was very leery about throwing her in, as I didn’t think they’d have enough time to flesh her out, but yeah, she was a highlight.

How she knew to grab that slicer/hacker thing from the server farm conveniently across from the kitchen in Lex’s mansion, I’m not sure.

And how was she going to get that photo? It’s digital, not a photo negative. Lex has that on a Dropbox somewhere. That’s a minor point, but it illustrates the biggest problem I had with this movie.

Aside from the Batman murder, of course.

Jason Yes. Someone I know said it was like they cut a bunch of panels out of books that they thought were cool. Arranged them on a table and said “Let’s make that movie” and later someone went “Uh, so, anyone have a plot idea?”

And we know the answer

Adkins This movie had two objectives:

2) Set up the Justice League.

It accomplished both, but ruthlessly.

And at the expense of much, as we’ve pointed out.

Jason YouTube videos of the other Justice Leaguers in no way sets up that movie. I mean, I think they think it does but, meh.

Adkins And Lex apparently designed each of their logos!

Ross But Parademons show up!

And the Flash has a helmet!

What more do you want?

Jason So help me? Those are the flying things in Batman’s dream? And they are Darkseid related?

Jason So, it is clear, many folks think this movie lost the heart of DC icons. The box office drop off from Friday to Sunday was worse than Fantastic Four last summer and that is really saying something.

And my second tragedy: these versions of these icons are going to define these characters for a generation. There is no other form of them in current pop culture. Ol…

Jason And there is nothing in this movie to drive them to other versions.

Superman Secret Identity is a great story that gets at heart of character but tweaks it. 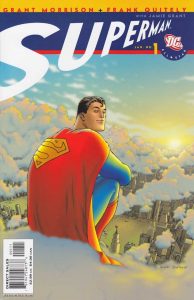 All Star Superman and John Byrne Man of Steel.

This is not a movie that is going to give a child a hero to look up to.

That’s the biggest sin, for me.